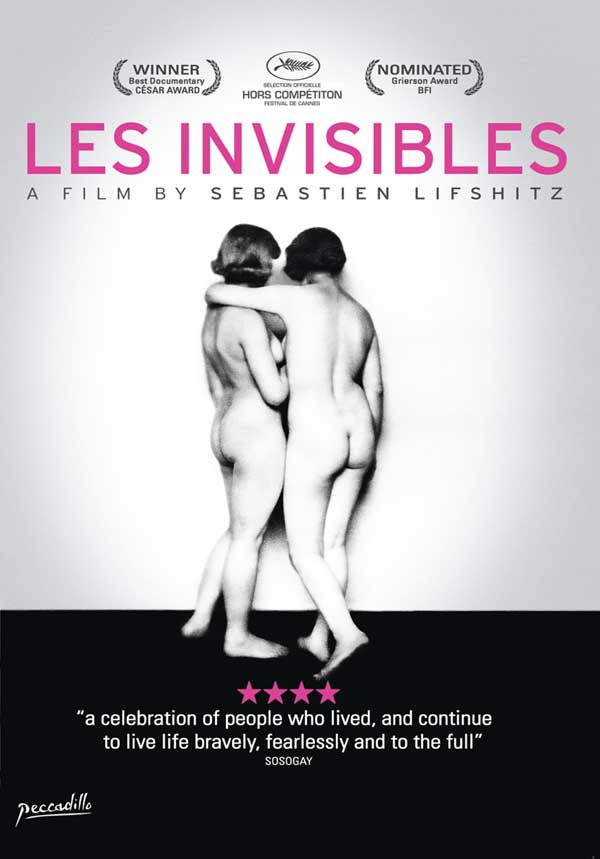 Director Sebastien Lifshitz made his name with modern gay classics such as Presque Rien. In Les Invisibles he moves from fiction to fact with a documentary about older gay people and their experiences. As the title suggests, the film sees these people as ‘the invisible’, whose lives are often sidelined and ignored, despite the fact they lived through a period when being gay was marginalised, discriminated against and life was far more difficult than it is today.

Les Invisibles interviews a range of older gay men and lesbians from a range of backgrounds. Some knew they were gay from a young age and have only been with people of the same sex, others were married and had kids, only coming to a full appreciation of their sexual preferences later in life.

For example there’s Bernard and Jac, two old gents who may spend much of their time bickering but genuinely seem to love one another. One of them has had a series of long relationships with men, while for the other this is his first proper gay relationship having been married to a woman for decades. Although they do constantly seem to be slightly frustrated by one another, they’re also rather sweet and pretty much like a straight old couple.

As well as showing us the participants’ now, the film delves back into the past, looking at the interviewees’ lives up to this point. This takes in things such as finding love when being gay was something secret and underground, a woman who only began expressing her lesbian feelings in tandem with a rising feminist consciousness in the 1960s, and those who’ve spent years struggling with their same-sex attractions due to the fact they were so often told it was dirty and perverse.

Lifshitz cleverly balances the fact these people’s lives are not so different to younger generations who often feel they have little in common with older LGTBs, and pointing out those things that are unique to those old enough to have been born between the wars. Les Invisibles shows that it was people like these who helped pave the way for where we are now, whether they were at the forefront of the gay liberation movement or not. Some did indeed spend time fighting for gay rights and/or suffered persecution for their sexuality, such as a female couple who lost their jobs due to their relationship, while simply tried to live their lives and find happiness away from sexual politics.

The interviewees highlight some fascinating experiences, from one of the women refusing to be accepted by her girlfriend’s family – seemingly because it didn’t seem right when her own family wouldn’t accept it – to how for many their gay consciousness rose alongside an increased anger about other issues, such as abortion being illegal.

There are a few moments where the film gets a little ‘French’, with the participants trying to suggest relatively simple things are imbued with some sort of great philosophical depth, but it’s certainly not as pretentious as it might have been. Largely it stays grounded, interesting and offers a fascinating insight into being gay in the past, as well as what it’s like to be old and LGBT now.

It would be intriguing to have a follow-up with interviewees from a different country, as while in most western nations homosexual acts were illegal until at least the 1960s, in France they were decriminalised back during the French Revolution (due to the fact the new penal code made no mention of same sex relations). It would be interesting to see the same style of documentary but interviewing those whose lives weren’t just marginalised but actually outlawed. That said, Les Invisibles is still a worthwhile and fascinating film.

Overall Verdict: Educational and entertaining, Les Invisibles certainly gives you an appreciation of the lives of older gay people, both how they live now and the life experiences that have brought them to this point.