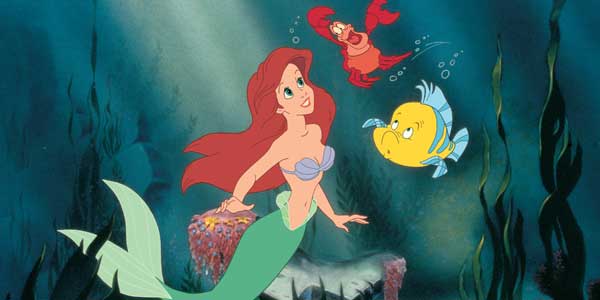 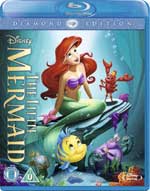 Then along came 1989’s The Little Mermaid, kicking off a remarkable run of critical, commercial and audience success that included Beauty & The Beast, The Lion King and Aladdin. While Disney Animation is perhaps most often thought of for its fairy tale movies, this was actually the first film the company had made based on a bona fide fairy story (this time one by Hans Christian Anderson) since Sleeping Beauty in 1959. They also threw a lot more money, time and effort at it than they had for years, even opening new studios to handle the artistic challenge, not least hand-drawing millions of bubble.

Despite these new facilities, it ended up being full-on traditional animation’s last hurrah, as it was the final Disney movie where the vast majority was drawn and coloured by hand. By the time of Beauty & The Beast, the company had perfected a new system that allowed the images to be coloured on a computer. With that movie a lot of fuss was made about the CGI ballroom sequence, but actually the majority of it was done on a computer.

Some of the testing of that computer system ended up in the Little Mermaid, with digital colouring used for a sequence towards the end, and even a little CGI when Ariel runs down a staircase (that wasn’t Disney’s first computer-generated imagery though, as the machinery in the Big Ben scene in Basil The Great Mouse Detective has that honour). While Little Mermaid sits on the cusp between traditional animation and computers, what makes it stand out is the artistry and storytelling.

Ariel is a young mermaid whose father, King Triton, is keen that she start acting like a lady and grows up. However she’s happy to explore her underwater world and collect treasures from the land above the waves – a place that she’s banned from. However when she breaks her father rules and goes to the surface, she ends up saving a young prince, Eric, who, in the way of fairy tales, she instantly falls in love with.

In order to try and find happiness, Ariel makes a deal with the sea witch Ursula, who gives her legs in exchange for her voice. However Ariel only has three days to make Eric love her, or else her soul will belong to Ursula.

It’s a charming, witty tale that’s beautiful to look at. While many people have been credited with the Disney renaissance that started with The Little Mermaid – such as producer Jeffrey Katzenberg and a new generation of directors (most of whom had been working their way up the studio ranks for years) such as Ron Clements, John Musker, Gary Trousdale and Kirk Wise – my vote would go for Howard Ashman who was, incidentally, a gay man.

He was brought in with Alan Menken to write the songs for Little Mermaid, after Disney had been impressed with their work on the likes of the stage version of Little Shop Of Horrors. However Ashman ended up being far more than just a lyricist, getting a co-writing credit as he came in and helped overhaul how Disney looked at story, not least teaching them  how stage musicals work and how that could be used to take Little Mermaid to a new level. A portion of a lecture Ashman gave on the subject is included on the disc, where he doesn’t just talk about the film’s songs, but why they need to be there and what they actually do for the structure of a story. The result is that The Little Mermaid is a far more coherent and cleverly put together movie than Disney had managed for years.

Ashman stuck around for Beauty & The Beast and had started working on Aladdin, but tragically he died of an AIDS-related illness before Beast hit cinemas. Nevertheless what he brought to Disney lived on long after him in a new (or rather refound) understanding of stories and how they can excite, entertain and move audiences. While Beauty & The Beast just pips Little Mermaid in excellence, it’s still a great movie with truly wonderful songs and beautiful visuals.

Those visuals have been given a great brush up for the film’s Blu-ray release, with excellent picture quality and crystal clear audio. It’s interesting that compared to the Beauty & The Beast Blu-ray, you really can see the differences physical hand-drawing made. While mixing in computers allowed more consistency and a much richer handling of things such as shadows and colour, there’s a charm to the fact you can see the brush lines and slight imperfections that was somewhat lost after Little Mermaid.

There are some good new special features too. ‘@DisneyAnimation’ is a 15-minute look into the place where the magic happens, featuring Little Mermaid directors Ron Clements and John Musker, along with some of the younger animators, talking about what it’s like to work at the studio. There is a slight whiff of it being a company promo, but it’s still interesting.  ‘Under The Scene: The Art Of Live-Action Reference’ looks at the fact that Little Mermaid marked the first time in decades that Disney shot live-action footage for the animators to look at when they drew the images. While the filming was more basic than what had been done for the likes of Snow White and Alice In Wonderland, it’s still interesting to see how it worked and how much of Ariel and Eric comes from the actors chosen to play them (both of whom are interviewed).

There’s also the aforementioned ‘Howard’s Lecture’, which is part memorial to Howard Ashman and also a look at a lecture where he explains to how make a musical work. The ‘Part Of Your World’ music video is less interesting unless you’re a Carly Rae Jepson fan, while ‘Part Of Her World: Jodi Benson’s Voyage To New Fantasyland’ may sound like it’ll be an interesting chat with the voice of Ariel, but is actually one of Disney’s almost compulsory ads for one of their parks that they feel the need to put on their discs. And with all the features from the previous DVD release also included, overall it’s a good selection.

Overall Verdict: A wonderful film that marks the end of true hand-drawn animation and the start of the Disney renaissance, which looks better than ever on Blu-ray.