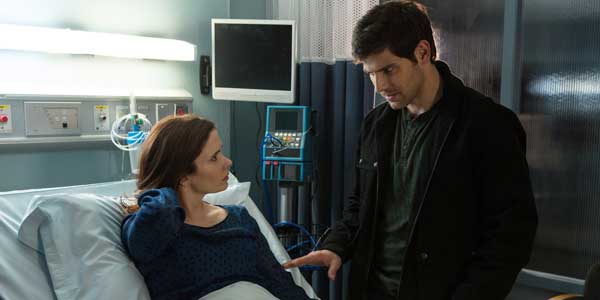 Grimm is one of those shows where the premise is so silly that it really ought to be dreadful, but it’s actually a lot of fun. It’s helped by some good actors and a tone that manages to be slightly contrary, as the characters take the set-up very seriously, but there’s still a sense it knows it’s often a bit daft.

If you missed Season 1, the basic premise is that Det. Nick Burkhardt (David Giuntoli) is a Portland, Oregon cop, who sees certain people’s faces morphing into that of strange creatures, revealing the beasts within. Nick is a Grimm, which isn’t just the surname of some fairy tale writing brothers, but is essentially a job, handed down in his family. He has the ability to see the beasts, known as ‘Wesin’, who live around us and to most people just look like ordinary humans. Each race is different, from those who are like bears to those who are like beavers, and some are far more dangerous than others. As a Grimm, he is supposed to kill these creatures – although the more time he spends around them the more he realises that some Wesin aren’t as bad as his family had always believed.

Much of Season 1 dealt with Nick discovering more about his ‘talent’ and building the show’s mythology. While fun it sometimes suffered from being a little formulaic and reliant on deus ex machine endings where Nick found just the right tool to off the creature of the week amongst his Grimm aunt’s belongings, rendering much of what had gone before a little pointless. The makers also seemed to be undecided about exactly how things worked, such as whether people other than Nick could see the Wesin morphing.

They seem to have realised that, as Season 2 sorts out the mythology and also relies less on convenient endings. The 22-episodes introduce various new types of Wesin, although thankfully it also spends time developing ones we’ve met before. It also strikes a good balance between standalone plots and on-going stories.

One of the main continuing tales concerns Nick’s girlfriend Juliette (Bitsie Tulloch), who nearly died at the end of Season 1. While she is saved thanks to a special potion, there’s one problem – she can remember everything except for Nick and their life together, throwing a massive spanner into their relationship. Although this plot goes on a bit too long, at the beginning and end it’s extremely well handled. We also learn more about the ‘royal’ Wesin, of which Nick’s boss, Capt. Renard (Sacha Roiz) is part. While he spent much of the first season seeming like he may have been setting Nick up for a massive fall, it turns out things are more complex than they appear.

All that’s fine, but I genuinely believe the show wouldn’t work without Silas Weir Mitchell as Monroe, who is Nick’s friend and also a ‘blutbad’, which is essentially Grimm’s version of a werewolf. He straddles both human and creature worlds, injecting plenty of humour into the show as well as ensuring things are more interesting than simply ‘Wesin = bad’.

It certainly doesn’t hurt either that David Giumtoli is quite the hottie.

There are times in Season 2 when things go a little too far, such as when they bring in UFOs, but mostly is a lot of fun, with plenty of action and adventure. It also looks really good on Blu-ray, which offers picture quality that noticeably outstrips HD TV.

Although they’re not particularly extensive, the special features are worth a look. They include a couple of behind-the-scenes featurettes, deleted scenes and a gag reel. It also seem a lot of other people like Monroe too, as he gets a ‘best bits’ montage.

Overall Verdict: A show that may be extremely daft when you start thinking about it, but when it’s on the screen it’s an entertaining fantasy adventure, mixed in with a police procedural.