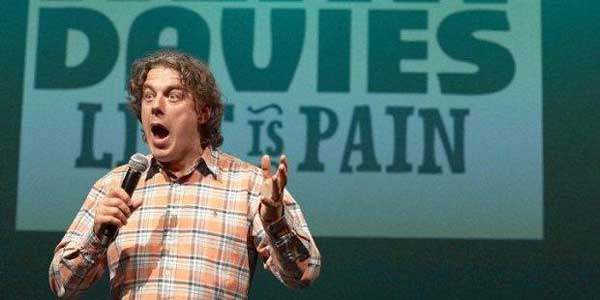 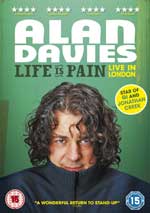 Much of the audience approaching this know of Alan Davies through his regular appearances on QI, in which he consistently outshines many touring comedians with his lovable quirkiness and child-like charm. Others might remember him solving creepy mysteries in Jonathan Creek. Few people know him for his stand-up comedy – partly as he hasn’t done any for quite a few years – but now he’s back to his roots with his new show, Life is Pain.

This drought of live gigs becomes quite apparent as Mr Davies runs through material that would have been very popular in the 90s, but something that contemporary comics have long abandoned. Given that many audience members will have been attracted to his show having seen him baiting Stephen Fry or investigating child friendly scares, his crudity is likely to take a lot of people by surprise. There’s rarely family friendly stand-up comedy, and despite his lovable charm, Life is Pain is no different. That feeling when you heard Robin Williams using ‘the C word’ recurs here: it’s a little jarring and parents may not enjoy explaining some of the concepts to their kids.

While some of the language is quite adult, Mr Davies anecdotes are as sweet and child-like as you could ask for; his trademark silliness. His soliloquizing puts the audience at ease, his delivery casual and easy going. Yet the show lacks a real theme or narrative. This absence of thematic drive is not necessarily a bad thing, but combined with his chummy delivery, fans of a more pointed and theme-based comedy show, such as Chris Rock and Christopher Titus, may feel it resembles whittling rather than a considered performance.

Relying very heavily on in jokes, Mr Davies expects a previous knowledge in his audience. Those who are ‘with it’ are going to feel hugely rewarded, but many will find they’re missing something. There will be swathes of monologue to which you simply cannot relate and are relegated to watching other people laughing. His is not the comedy that weaves a strange world where everyone can imagine it, rather than remember it, like Dylan Moran does so effortlessly. When Mr Davies does start to create scenarios towards the end, the room is in stitches: the words “Mummy isn’t coming tonight” should not be this funny! Yet it simply is too little, too late. If the entire show consisted of this type of comedy, it would be unmissable. Unfortunately that really is not the case.

This reliance on nostalgic comedy makes the gags feel piecemeal: using people’s experiences to drive the humour rather than creating scenarios everyone can enjoy in unison: an example of this is the section about going on holiday in the 70s. It’s simply too specific for everyone.

Overall Verdict: If you want unbridled silliness delivered to you as if you were chatting with your mate ‘down the pub’, Alan Davies: Live is Pain will suit you well. But this type of comedy strays into an arena that contains names like Jimmy Carr, Michael McIntyre, and Dara Ó Briain. In this ring, Davies’ comedy feels rusty and behind the times. You cannot fault just how sharp this man is: a bit more natural comedy with the audience and scenario creation would really show off this man’s talent.