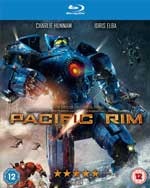 The problem is that the film tries to create archetypes more than people – the hero with something to overcome, the damaged love interest, the grizzled commander, the arrogant  colleague who’s convinced the hero with fail. It’s a common tactic with big tentpole films, and writers Guillermo Del Toro and Travis Beachman have certainly been thumbing through their copies of Joseph Campbell’s Hero With A Thousand Faces to try and understand the archetypes they need to fulfil the hero’s journey – from being reluctantly called to action, to a flirtation with resurrection – however the result is characters that don’t feel quite real.

It also suffers slightly from the other disease of the modern blockbuster, which is that is feels like some of the ideas for what would look cool didn’t come from the script, but had to be fitted into it, no matter whether it actually helps the flow of the film or even makes a huge amount of sense.

Luckily though, while it has some annoying flaws, Pacific Rim is still an entertaining ride and the action and effects are incredibly impressive. Guillermo Del Toro has an exceptional visual sense and storytelling style, but here its feels he was probably trying to make something mythic, but this quality is used as such a blunt tool that it make the characters feel little fake and flat.

The film is set several years after huge monsters – known as Kaiju – started rising out of a rift in the Pacific. To stop these creatures, humankind collaborated to build enormous humanoid robots, called Jaegers, to battle them. While the Jaegers were initially a success, eventually the authorities decided to retire them and build an enormous wall instead.

When the wall proves useless against the increasingly powerful Kaiju, former Jaeger pilot Raleigh Beckett (Charlie Hunnam) is called on to return to his machine, Gypsy Danger. He’s not keen, as the last time he was inside a Jaeger, a Kaiju managed to kill his co-pilot and brother, Yancy. However the commander of the programme (Idris Elba) wants him back as he has a plan that could close the rift. First though Raleigh must find a new co-pilot, as the Jaegers need at least two people to control them, and they must be ‘drift’ compatible – a state where the two pilots’ minds begin to meld so they can control the enormous machines.

The film’s world, which borrows extensively from the Japanese mecha canon, is fantastically well built, with a massive amount of attention paid to things such as the designs of the robots, the neon-glow lighting and the astonishingly detailed special effects. Indeed it’s worth watching the special features on the Blu-ray to see just how much detail Del Toro and the rest of the crew went into to make sure that the effects looked right and the physics of them seemed plausible. There are moments when it’s astonishingly impressive, such as the way water deflects off the Jaegers when they move in the rain.

There’s also a lot of thought gone into figuring out how things work, such as the idea of drifting and the control of the Jaegers. It’s just a bit of a shame they couldn’t have put more fully rounded people into the bots.

It does look beautiful though and that’s definitely brought out on the Blu-ray, along with a very impressive DTS surround audio track. The two-disc set also includes some very good special features. Alongside the movie you can watch around an hour of picture-in-picture focus points, which take you deep inside the making of the movie. With Guillermo Del Toro providing a wonderfully geeky audio commentary, plus some interesting features and deleted scenes on the second disc, it all provides plenty of fascinating info on the making of the movie.

Overall Verdict: Incredible to look at and the robot-on-monster action is great, but in trying to create archetypes, the characters and dialogue become a little blunt and the human side less interesting than it might have been