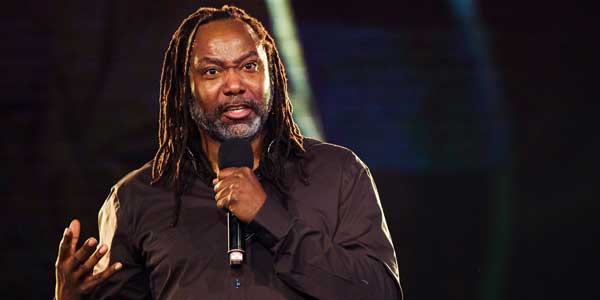 There’s no doubt that Reginald D. Hunter is a funny man. He has a wonderful mix of American openness and British sarcasm, as well as a great ability to cut to the chase with immense wit. That’s certainly on display in In The Midst Of Crackers, where he covers subjects such as racism, the differences between the sexes, the etiquette of sex and the difficulties he’s faced as he’s become better known.

He’s also good at coming across as a simple man with simple needs, but behind that he’s a man who likes to think. Around the jokes are plenty of ideas that he’s offering on the way he looks at life and the problems he sees with the world around him. A lot of what he has to say is smart and salient, although as the gig went along, I started to feel he was using his intellectual edge to abdicate any responsibility.

The first hint of this comes early on, when he talks about how he uses the ‘n’ word not to specifically refer to black people, but as a more general term, and because he can do that, he’s therefore allowed to do the same with ‘f*ggotry’. However he conveniently skips over the fact he’s a black man saying the ‘n’ word, but he’s not gay, or what he’d feel about white people saying the ‘n’ word to him.

There are several instances where he uses thought not to truly think through things, but to essentially find a reason why what he does is okay, such as his attitude towards women and racial politics. He does admit he’s often realising new things and changing his mind, and that’s fair enough, but what I think is slightly more frustrating in In The Midst Of Crackers is the way he gradually finds reasons why nobody is in a position to criticise him. For example I’m white and privileged, so my opinion apparently isn’t as valid as I don’t come from the same place as he does.

This wouldn’t be a problem except I did end up taking issue with some of what he has to say. If he presented it as ‘here’s something to think about but feel free to disagree’, that would be fine, but it’s not. It more comes across as ‘this is how it is and you’re not allowed to say any different because you’re not me’.

Luckily despite this he’s still very funny, and some of his material will have you in stitches. There are also ideas that he talks about where the more switched on audience members will be right on his side as he eloquently unpicks what’s really going on with situations such as the faux controversy over his PFA gig, where afterwards some people were apparently offended by his use of the ‘n’ word. But elsewhere he seems to be trying to make himself criticism Teflon, whether it’s white people criticising his comedy or women criticising his romantic techniques – nobody is allowed to say anything that’s valid.

Many people won’t mind the difficult edge to his thinking and they’ll just enjoy the comedy, and there is indeed plenty to enjoy.

Overall Verdict: Reginald D. Hunter is a very funny man, but perhaps it would be better if he used his intellectual edge to engage others rather than find reasons why their opinions aren’t valid.