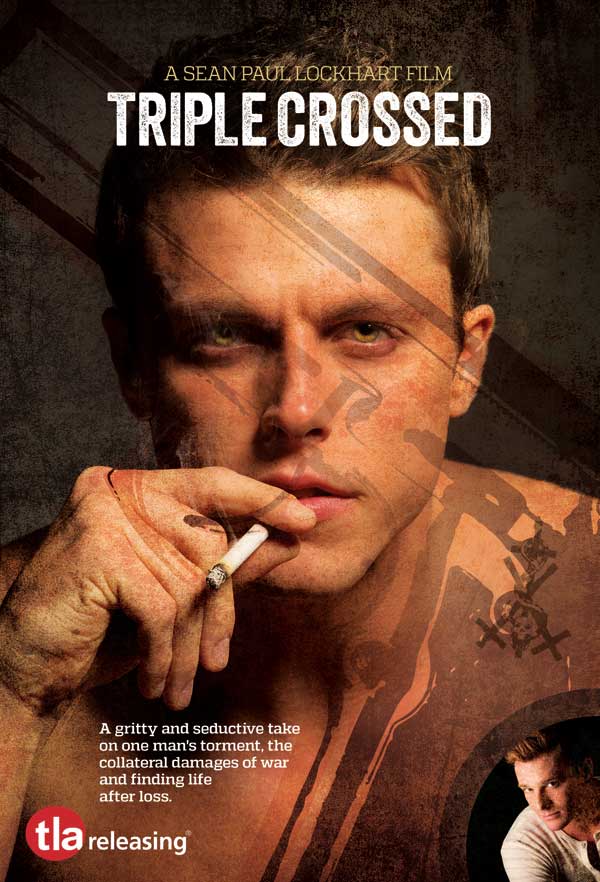 The film follows Chris (Jack Brockett), who’s newly returned from Afghanistan and while he waits for his veteran benefits to kick in, he’s living in his car. After applying for a job providing security for a rich woman, he gets a surprising alternative offer. She says she will pay him handsomely to kill Andrew (Lockhart), her brother’s lover, who inherited a large chunk of her family’s business when her sibling died in combat.

Chris agrees to turn assassin, but when he meets Andrew he starts to like the young man, which ends up with them sleeping together. However as the title suggests, nothing is as it appears and everyone has something to hide.

It’s nice to see a gay-themed thriller, as they’re pretty thin on the ground – apparently we’re still only allowed dramas and comedies. Triple Crossed is far from perfect, but it’s a decent watch with a surprisingly sweet romance at its heart – even if there are moments when credulity is stretched to keep the lovers together once they start to realise what’s going on.

The acting is pretty variable, ranging from the very good to the hopelessly amateurish but the cast nevertheless manages to keep things moving along and engage the audience’s interest. There’s a slightly soap opera aspect to the twists and turns, which means that as you try to work out what’s really happening, it turns out that pretty much everything you thought might be going on actually is, all layered on top of one another, no matter how unlikely or how little sense it makes when you actually start thinking about it.

Normally those things would destroy a film, but there’s a simple earnestness to Triple Crossed that’s very appealing. Lockhart may not have shown he’s a directorial genius, but he’s got a steady hand behind the camera and knows how to tell a story. The movie may not be great, but it’s worth a look for being entertaining and a rare case of a watchable gay thriller.

Overall Verdict: Triple Crossed may have its flaws, but it’s an entertaining thriller with a cute gay romance at its core.