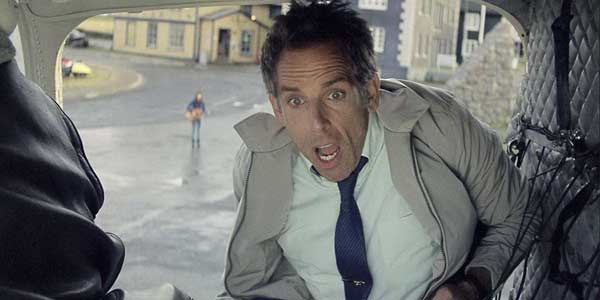 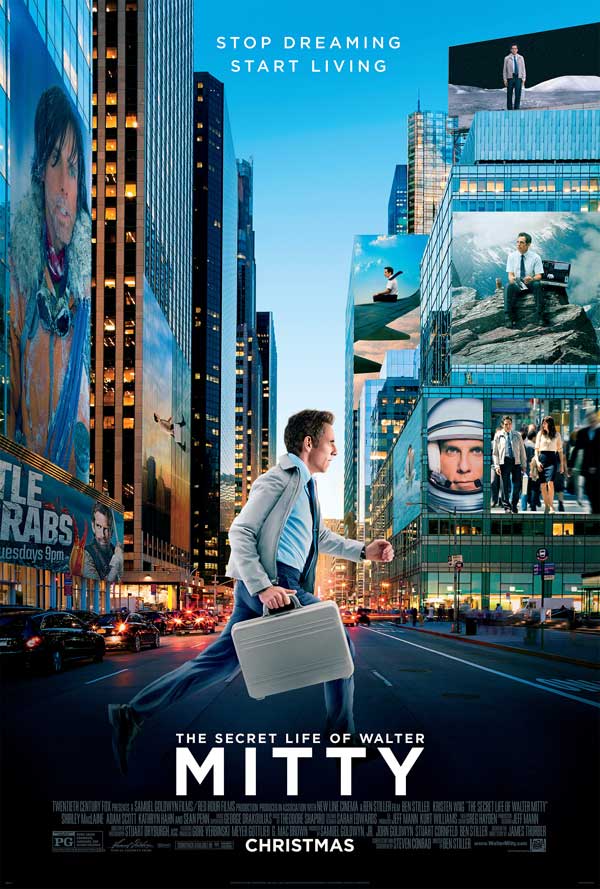 There’s one thing to be said of Ben Stiller’s reimagining of famous daydreamer Mitty – he certainly captures the mood of the times. Mitty works at Life magazine, which is going digital, and most of the staff are being laid off. The ‘digital takeover’ is being handled by Ted (a gloriously oily Adam Scott) and there are many scenes of upset worker carrying brown boxes containing their meagre possessions out of the building, security guard in tow.

It’s strange then that Stiller’s Mitty is still such a watery sentimental tale, with little punch. He lives a dour, colourless life, working in a dark basement with his pal cataloguing Life’s 35mm negatives – a valuable labour of love, for sure, but clearly one which is doomed in these digital times. He is an office drone, and escapes from his repetitive existence by daydreaming, especially about co-worker Cheryl (Kristen Wiig). He rescues her dog from a burning building, she throws herself at him, he beats up Ted in a lift – all, of course, in his head.

Mitty is a member of an online dating agency, and discovers Cheryl is also a member. When a technical error occurs he rings the company and forges a bond with Todd, who is alarmed that Mitty’s life seems to be so empty – Walter has done nothing, been nowhere and achieved nothing. Todd also – bizarrely – asks if Mitty works in the same office as Cheryl, why doesn’t he just say hello to her in person? Just to make things worse he has the world’s most annoyingly ditzy sister, and a mum (Shirley MacLaine) who treats him like he is still a boy.

Mitty’s life changes when he is sent a reel of film by famous photographer Sean O’Connell (Sean Penn) with No25 for the final cover, the best picture he has ever taken. Mitty, who has never lost a negative, can’t find it – and sets off to find O’Connell around the world, from Iceland to Greenland to Afghanistan, having lots of adventures along the way and, of course, finding his inner character.

The biggest strength of the film is its superb design – even the opening credits, with Mitty walking to his subway station and catching his morning train are enlivened by the brilliantly placed credits, on the tube signs, the side of buildings and even the train tracks. A shot of Mitty looking at a strip of negatives blends into him sitting by a fountain in a quite seamless, visually brilliant way, and when we get to Iceland and Greenland the glorious scenery takes over. Stiller and Wiig also have plenty of charm, and use it to the full – Wiig is especially winning seeing as the script gives her no jokes or anything of interest to say. And here lies the rub.

The key ingredient in any film, but particularly a gentle romantic comedy like this, is the script, and here it’s all just a bit, well, meh. Why Mitty lives such a dull life – he’s still basically a child – is never really explained, and his relationship with Cheryl is strangely handled – he seems to be able to talk to her, she seems to like him, why don’t they just have a coffee?

Also why does this man-child who has had blank travel diary suddenly jet off all around the world to exotic locations without a thought? Surely he would at least be a bit scared of flying? Scenes of him finding his inner adventurer, cycling, running and skaterboarding around Iceland, just seem to happen, the script doesn’t bother to fill in the huge gaps that must be in his mind.

Overall verdict: Great design and charming performances can’t completely cover up a rather unengaging experience. It’s fine, but for anyone looking for some depth, it’s very unsatisfying.