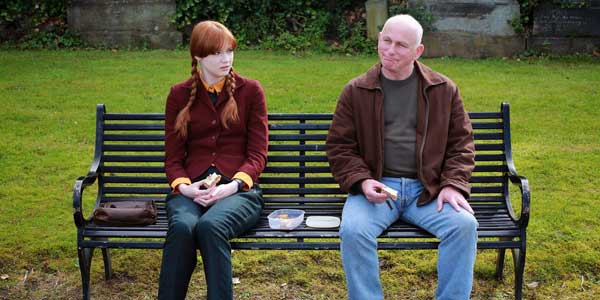 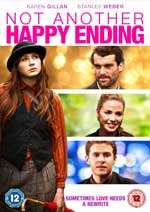 Jane’s (Karen Gillan) novel has been turned down by an endless list of publishers, so she’s thrilled when Tom Duval (Stanley Weber) say he’ll bring out her book. However when he changes the title without telling her they have a massive falling out. She says she’ll complete the second book she owes him and then they’ll have nothing to do with one another.

Her first novel becomes a major success, she starts to date the man hired to write the screenplay version, and the father whose hurtful actions inspired her book re-emerges and they begin to connect. Unsurprisingly she begins to feel exceptionally happy. Her writing has always come from a place of pain, so suddenly – with just the final chapter of her second book to complete – she gets writer’s block. Tom’s publishing company is having money trouble and he needs the novel, so he decides the only thing to do is make Jane miserable again. As he sets out to do so, he inevitably begins to realise his feelings for her.

Not Another Happy Ending really wants to be a quirky, charming, moving romantic comedy, but it never quite makes it. The problem is the script, which never finds a way to hold things together. For a start the first 15 minutes look as if they’re necessary, but they’re actually just filler, rushing through events to get us to the place where the story actually starts. A few tweaks and it could have started about 20 minutes in. After that it simply tries to do too much and doesn’t have time for it.

Jane’s relationship with her father has the potential of being really powerful, but it’s never properly dealt with and its effects on Jane are more theoretical than actual. Likewise Jane keeps seeing and interacting with one of her fictional characters, but it never goes anywhere and ends up seeming like a pointless quirk. All that might have been forgivable if the characters made sense, but they don’t. Everyone is rather lightly coloured in and there are too many things that are either ignored or where characters act in illogical ways. For example, the ramifications and believable reaction to Tom’s money woes are completely ignored and it only pops up when the plot really needs it to – and even then in a way that has little to do with the real world.

It’s a shame as Karen Gillan shows she can be just as charming outside Doctor Who as she was in the sci-fi show. And while the French Tom Duval may occasionally have difficulty getting his lips around the English language, with a better script he could have been a perfectly fine romantic lead – instead he often comes across as a bit of a dick where you can’t see why you’d want to root for him and Jane to get together.

Overall Verdict: It’s gets full marks for effort, but Not Another Happy Ending tries to do too much and replaces common sense with rudderless quirks so that ultimately it adds up to very little indeed.