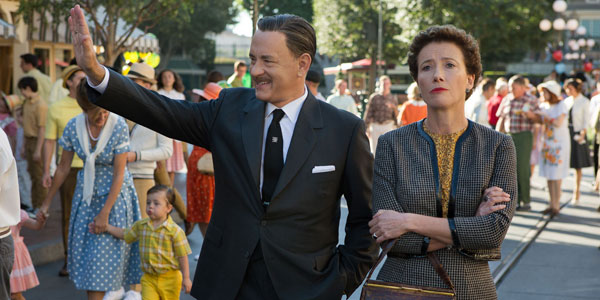 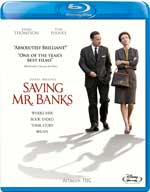 Cor blimey Mary Poppins! It’s 50 years since the Julie Andrews and Dick Van Dyke starrer arrived in cinemas, won the Best Picture Oscar and became one of the greatest family classics ever. However as Saving Mr. Banks shows, Disney’s attempt to get the character on the screen started a long time before the movies 1964 debut, as the character’s creator, PL Travers, wasn’t keen on selling the screen rights.

While looks behind-the-scenes tend to focus on what happened on the set, this is about what happened before they even started thinking about building sets. In this slightly fictionalise account, Travers (Thompson) has spent years snippily dismissing Disney’s (Tom Hanks’) advances, but when her agent tells her she’s running out of money, she agrees to travel from her London home to Los Angeles to explore a Mary Poppins movie. However that doesn’t mean she’s ready to give Walt what he wants.

Travers is a strong, self-possessed woman who’s not prepared to put up with anything she sees as nonsense – including the idea that a Mary Poppins film would be a musical or involve any type of animation. Going into the writing room with screenwriter Don DaGradi (Bradley Whitford) and the legendary songwriting team of Robert and Richard Sherman (B.J. Novak and Jason Schwartzman), it soon becomes a battle of wills, with Travers seemingly dedicated to setting up obstacles that will ensure the movie never gets made. Walt has promised his kids it will happen though, and he will do anything he can think of to get Travers to agree to sell the rights.

This is contrasted against the writer’s early life in Australia, which initially seems rather idyllic. However the father she adores (Colin Farrell) is actually a drunk with a tendency to get fired. She loves the magic he brings into her life, but as she grows she can’t help but to see his failings. And it may be that she brought so much of her own family into Mary Poppins that is the reason she doesn’t want to give the nanny and Banks clan to Disney as an adult.

Although Saving Mr. Banks didn’t get as many Oscar nominations as perhaps it hoped, it’s still a very entertaining, often funny and sometimes moving film. Thompson is terrific in the lead role. Indeed early on she’s almost too good, making Travers so believably blunt, tetchy and sharp that the character risks becoming unpleasant. However she always pulls it back to ensure we know she has heart and there is a child inside her, even if it’s hidden deep.

While there’s a sense that things have been slightly oversimplified compared to the reality, even so the movie pulls you in with its charm, ensuring there’s a smile on your face as Disney and his team attempt to work with a woman who clearly and decisively doesn’t want to be there.

The film looks extremely good on Blu-ray, with a nice, sharp picture and clear audio. There are a few good special features too. The best is the ‘The Walt Disney Studios: From Poppins to the Present’ Featurette, which takes us on a tour of the place where the Mary Poppins film was conceived, and shows us how in some respects it hasn’t changed all that much over the years. There’s also an interview with Richard Sherman, who’s full of admiration for Saving Mr. Banks. He also pops up in the ‘Let’s Go Fly a Kite’ Featurette, where he leads a rousing chorus of the famed song on the final day of shooting.

Overall Verdict: A charming, entertaining look at the difficulties getting Mary Poppins onto the screen, led by a typically impressive performance from Emma Thompson.