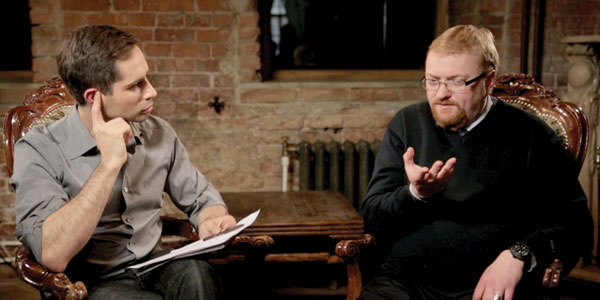 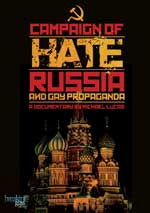 It’s not too surprising he picked these two countries for his first documentaries, as he has long regarded Israel as his spiritual home and took Israeli citizenship in 2009. Russia meanwhile is where he was born during the depths of the Cold War, a time when his family were forced to play down their Jewish heritage. As several armchair psychologists have suggested, it may be this forced suppression of his identity during his youth that has helped make him such a vociferous, attack-dog supporter of Israel, and such a strident critic of Russia, where he was born.

Of course there’s plenty about Russia to be critical of. Campaign Of Hate interviews a range of gay Russians to get their take on life in the country, and it’s fair to say that what they have to say isn’t good. The much publicised 2013 ‘gay propaganda’ law is just the tip of the iceberg, with Russia under Putin becoming increasingly conservative and religious, public attitudes being overwhelmingly negative towards LGBT people, and the authorities unafraid to either scapegoat or vilify sexual minorities.

Gay people have to be afraid that anytime they agree to meet someone it will actually be a set-up and they’ll be beaten or tortured. And now with the gay propaganda ban, their very existence – if noticed by anyone under 18 – is illegal. However the law isn’t just an assault of free speech and odious on principle, as it’s led to everything from families with same-sex parents having to worry about losing their children, teachers having to be terrified for their jobs, and many homophobes feeling that the government has essentially given them free license to attack LGBTs in any way they see fit (and the police pretty much agreeing with that).

Campaign Of Hate covers much of this through the voices of the gay people themselves, and as a director it has to be said Lucas seems to have matured from Undressing Israel. His earlier documentary was a little unfocussed and felt too much like a holiday brochure for Tel Aviv, whereas here there’s a more cogent voice, taking you into how Russia became the way it is towards gay people, the effects the current homophobia groundwell is having, as well as the outlook for the future.

On that last score the interviewees are mostly rather negative – the future is not bright. Given their experiences you can understand why they think that way. However while not directly addressed in the film, it’s difficult not to see parallels between Russia today and many western countries 30 or 40 years ago.

From the fear of gay-bashing to the almost unthinking conflation of homosexuality with paedophilia, you can certainly see the parallels – including the difficulties that stem from lack of visibility.

So while most of the interviewees in Campaign Of Hate can’t see gay marriages happening in in Russia in their lifetime, there is perhaps some hope. After all, hundreds of couples were able to marry for the first time in the UK last weekend, but 30 years ago if you’d asked LGBT Brits whether they ever thought gays would be generally accepted and able to marry, you’d have got a resounding ‘no’. Even Campaign Of Hate’s contention that nothing will change with Putin in charge is an over-simplification, as the Russian President is nothing if not an opportunist. If he could see political mileage in embracing everything LGBT, he would.

It would be nice if Putin decided he didn’t want to rule Russia with an iron fist anymore, but gay rights in Russia is far more than just about the President, and occasionally Campaign Of Hate slightly obscures that. It’s a shame as it’s a fascinating documentary, but when it comes to placing blame and looking to the future, it is perhaps a little biased and blinkered. After all, you need to change society to get rid of Putin, as just him stepping down won’t change people’s minds on its own.

Overall Verdict: An interesting, sometimes moving and occasionally disturbing look at the prevalence of homophobia in Russia and how it’s blighting many people’s lives, although it’s perhaps not as clear on where things should go from here as it could be.