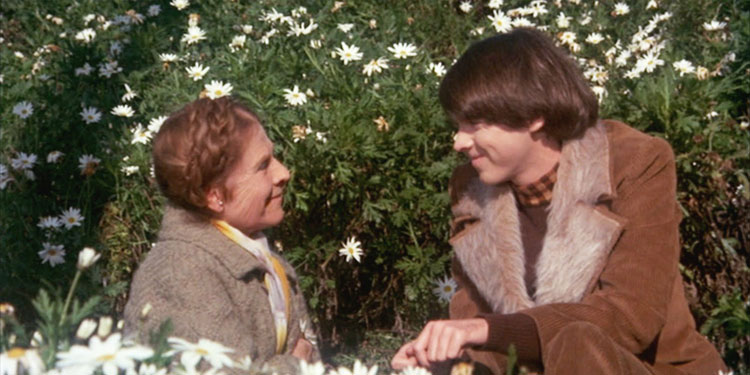 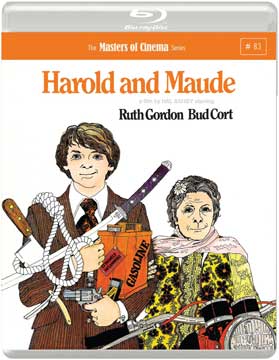 Harold and Maude can be a tough sell. Despite saying to people that it’s a small masterpiece that’s amongst the best American movies ever made, the moment you mention that it’s a full-on love story between a teenager and a 79-year-old woman you can see the horror start to mount in people’s eyes, especially when you confirm we’re not talking purely about platonic love.

Now it’s arrived on Blu-ray, and I can only hope the release convinces a few more people to indulge in its quirky and yet often profound delights.

Harold (Bud Cort) is the teenager. A young, rich man who’s obsessed with death and spends his days attending strangers’ funerals and faking his own suicide, which has become his primary method of communication with his mother (Vivian Pickles). She’s a woman who has decided what son she wants – a very dull, normal one – and nothing will deter her from that mission, no matter what Harold does.

Then the young man meets Maude (Ruth Gordon) at one of the funerals, as she too has a penchant for turning up even though she’s never met the dead person. While the shy Harold isn’t initially sure what to make of this near-octogenarian, he can’t help being drawn to her positive worldview, where joy can be found in even the tiniest of things. Almost in spite of himself, Harold starts to fall for Maude, irrespective of the massive age gap.

A movie about a teen and a 79-year-old falling in love sounds like it’s just in it for the shock value, but that couldn’t be further from the truth. The film is more about challenging your view of the world and why we see things the way we do, whether it’s extreme May-December romances or the meaning of a funeral. It’s helped in this tremendously by some truly magical moments, including one of my favourite shots in cinemas, where so much is almost instantaneously revealed about Maude without words in what seems like an almost incidental image of her arm.

Screenwriter Colin Higgins was gay and there’s undoubtedly a sense that this plays into the film’s challenging of traditional relationships. It also probably made him more sensitive to the possibilities of the sexual revolution, as well as that with the right viewpoint the future can be a beautiful place.

I know the moment I said ‘teenager and 79-year-old; some of you immediately switched off, but please give the film a try, as with nearly everyone I know who I have convinced to watch it, it’s become one of their favourite films.

This Blu-ray edition is definitely a step up from the DVD, although that’s more because the earlier disc was grainy, sometimes murky and lacked edge, rather than because it’s a perfect image. It’s about as good as you could expect for a film from 1971 that hasn’t gone through an incredibly expensive restoration process, and it does succeed in bringing out the films more vibrant colours, even if they are still somewhat dulled by the aging of the film stock it was shot on (which is a problem a lot of movies from the 70s face, as colour film from that time is notorious for fading and taking on a somewhat sepia tone).

There isn’t a massive amount of special features, although you do get a fairly interesting 25-minute Q&A with an expert on Hal Ashby, who fills in the background of the film, how it got made and what makes it such a success. There’s also a worthwhile audio commentary with Ashby biographer Nick Dawson and producer Charles B. Mulvehill, as well as a 40-page booklet.

Overall Verdict: In my opinions Harold and Maude is one of the best movies ever made. Ignore the age difference and just bask in its charm, wit and incredible thoughtfulness.