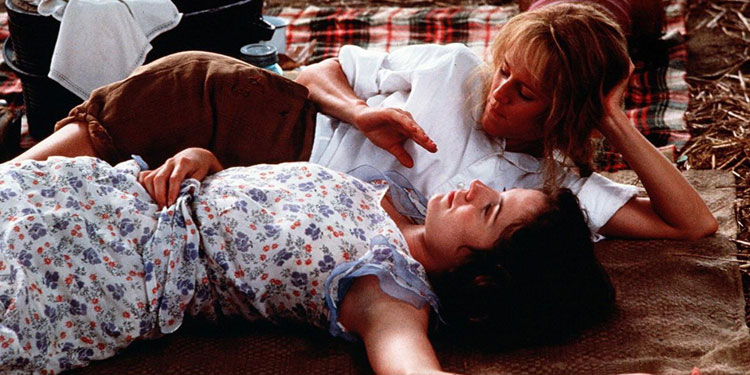 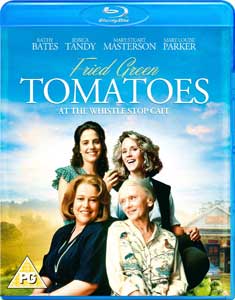 It’s a great pity as these sorts of film can be excellent and Fried Green Tomatoes is a wonderful example – even if there are some reservations.

Evelyn (Kathy Bates) is a middle-aged woman on the edge of menopause who’s increasingly wondering what’s wrong with her life. Her husband completely takes her for granted, young people disrespect her and she’s stuck in a rut. While visiting one of her hubby’s relatives in hospital she meets the elderly Ninny (Jessica Tandy), who regales her with stories of the past.

Ninny talks about life in 1920s Alabama and most particularly the friendship between Ruth (Mary-Louise Parker) and the no-nonsense tomboy, Igdie (Mary Stuart Masterson). As Evelyn and Ninny grow closer, the old lady talks about Ruth’s abusive marriage and how Igdie helped save her from it, with the two women deciding to open up the Whistle Stop Café with its famous Fried Green Tomatoes.

Ninny also recounts the difficulties the women faced after the disappearance of Ruth’s husband. But who was it who did the violent man in?

Evelyn finds inspiration in the stories, as well as in her friendship with Ninny, and begins to try and break out from the staid routine and boredom that her life has offered so far.

It’s a wonderful, charming and often very moving film, which takes on the unfortunately rare theme of female friendship and the strength it can bring. It’s helped in this tremendously by the wonderful performances. Although the spine of the film is the Alabama of the past, its heart is the relationship between Ninny and Evelyn. Kathy Bates in particular is brilliant and it’s criminal she didn’t get an Oscar nomination. Bates had won the year before for Misery, and Jessica Tandy picked up the gong the year before that for Driving Miss Daisy, so it’s little surprise they’re so good together here.

However even after 23 years it’s difficult to ignore the elephant in the room. In the book the film is based on, it’s made clear that the relationship between Ruth and Igdie is a romantic one, but the film completely and very deliberately obfuscates this. Director John Avnet has said a food fight scene is supposed to be symbolic lovemaking and there are certain things the women say that hint at lesbian undertones. The movie also sets up what is absolutely a family unit with two mothers and a child all living under one roof.

However it becomes frustrating in that Fried Green Tomatoes doesn’t just refuse to be explicit about the same sex relationship, but seems to be actively saying one thing and doing another. You can see why many reviewers and gay activists took issue with it when it was first released, even if GLAAD did give it an award for the film with the best lesbian content (which some said was done deliberately to try and highlight the whitewashing of sexuality in the film – that this was a movie about a lesbian relationship even if it pretended it wasn’t).

In some ways it’s odd, as the film is very keen to take on the idea of prejudice, such as racial and social discrimination, along with bias against women and the disabled, but it resolutely won’t say gay. In fact if you watch the film with the sound off, you would undoubtedly think the movie centred around a lesbian love affair, but the dialogue says something different.

It’s whitewashing of what is obviously going on is frustrating and it would almost be easier if the rest of the film wasn’t so sweet and charming. It is a wonderful movie, as long as you look past the fact it’s pretending the lesbian relationship isn’t a lesbian relationship. And even if you have issues with what happens in the 1920s sections, the relationship between Kathy Bates and Jessica Tandy is a brilliant look at female friendship and its transformative possibilities.

Overall Verdict: A nostalgic and wonderfully made film about the power of female relationships, which has oodles of charms and also plenty of frustrations with its refusal to deal with the lesbian elephant in the room.