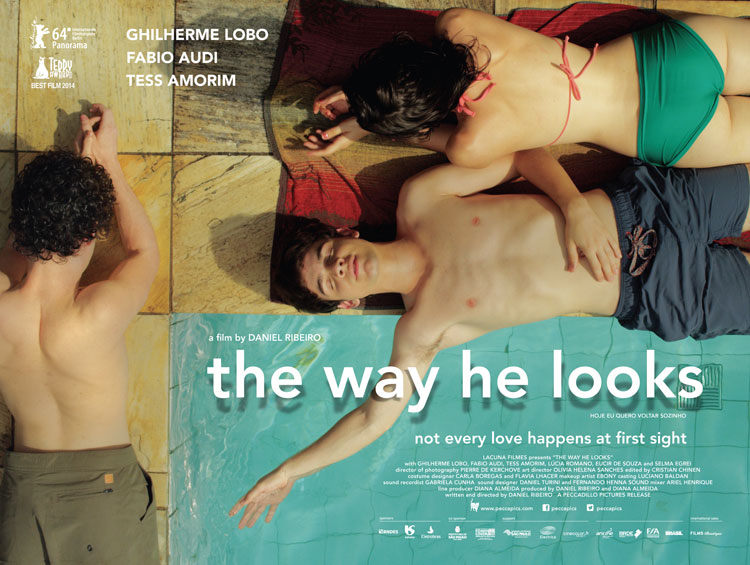 As blind Leo (Gilherme Lobo) begins to grow into young manhood, his best friend Giovanna (Tess Amorim), who looks out for him, starts to get in his way, so he begins to plan an exchange trip abroad. However, when a new classmate called Gabriel (Fabio Audi) arrives, the three become friends and Leo begins to consider revising his plans. As the bond between Leonardo and Gabriel deepens, they start to realise there’s something beyond friendship brewing, but must also battle the social pressures of girls and drinking and schoolmates.

While this premise might seem a little samey at first, the introduction of a blind protagonist gives it a little freshness. However, it’s not just this that makes it fresh; it’s a lovely film, executed confidently and tenderly by Ribireo and his cast.

It’s nice to see how these characters have all been fleshed out from the original short, as well as giving us more of the world around them than was originally shown; to the point where the viewer feels quite entranced by it and drawn into their existence. There’s some brilliant cinematography, with certain scenes shot from directly above, giving it an almost a comic book style which, while it’s interesting visually and very nice to see, doesn’t detract from the reality of the scenes shown – in fact it draws the viewer in further.

None of the characters feel caricatures; Giovana, who may well be secretly in love with Leo, is never made out to be anything more than a normal girl with understandable feelings and the relationships between all three of them are wonderfully tender and touching. The cast ably captures highlights of teenage behaviour such as pretending to be more drunk than you were to excuse embarrassing behaviour; and unexpected arousal in the showers. Even the class bully isn’t shown to be a monster or a one-dimensional bad guy; he’s just a teenager and, well, a bit of a dick. (Weren’t we all?) His behaviour is believably obnoxious for the fun of it, not because that’s all one feels there is to his character.

You can watch the original short the film is based on by clicking here.

Overall Verdict: A beautiful and heartwarming tale of coming of age and falling in love that will tug the heartstrings of all but the most hardened viewers. You might wipe away a tear, but you’ll do so with a smile.