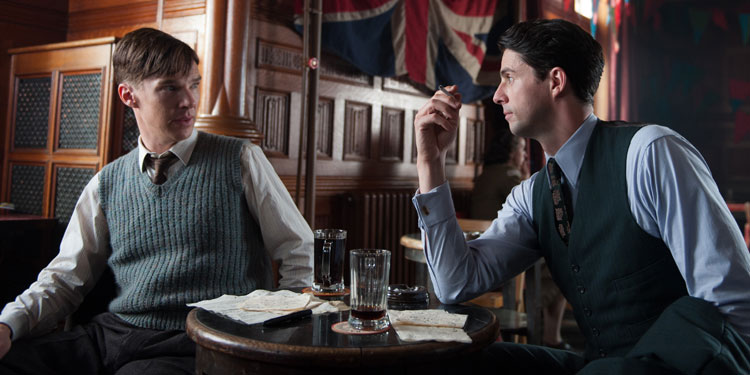 The story itself has been the subject of a West End play in Breaking the Code, and a film already, Enigma, although the central character was fictionalized. Here we get the true story of Alan Turing, the mathematical and linguistic genius who cracks codes for fun. However during WWII the Nazis invent a machine so complex it codes vital messages with 19,000,000,000,000,000,000 possible answers. It’s impossible to crack, right? But with U-boats sinking ships in the Atlantic and the Luftwaffe creating havoc in the skies it’s vital that someone crack the code.

Turing, a genius but loner at school, is the man for the job, although persuading Commander Denniston (Charles Dance) is a tougher ask than breaking the code itself. Funds are limited, so Turing assembles a team, promptly sacks two of them and puts a puzzle in the paper which, if it is cracked in six minutes, will get you the job. Enter posh girl Joan Clarke (Keira Knightley) – yes, a woman!

The race against time is on, but there are two elephants in the room. One is the team clearly has a spy in its midst, and the other is Turing’s personality – he’s rude, abrupt, does not suffer fools gladly and has some very strange tics. The explanation – blurted out halfway through the film with no preamble – is that he is gay, still illegal at the time. Will he win over his team with the help of Joan, and beat the machine – and what will be his reward?

What is desperately missing here is the massive irony of the theme of the film. Turing basically won Britain the War, he saved the lives of millions of people and shortened the conflict by two years. His reward, as we see thanks to time shifts, is to be arrested for his homosexuality and ‘chemically castrated’. It’s an appalling end to the story, but it is telegraphed and never adequately dealt with as a theme. It tells the story but in such a clunky, simple way the depths of the tale are never touched upon. He keeps telling everyone he is homosexual but the film is surprisingly coy about this – he has a crush as a boy which ends tragically, but no liaisons after that. His toe-curling proposal to Joan comes out of nowhere.

All of the clichés are there, present and correct, from Dance’s silly bugger Commander to Mark Strong’s oh-so-mysterious MI6 agent – complete with dreadful wig – to Knightley’s jolly-hockey-sticks Joan. Then there is Cumberbatch’s Turing. He basically reduces this fascinating character to a series of tics, flicks and stammers, from  his early OCD at school to his refusal of a sandwich because he is so wrapped up in his work. With his pompous, flat voice and smell under his nose, it’s a performance that practically screams ‘give me an award’. The scene where he proposes to Joan – they could sit and do puzzles together all evening – has none of the comic irony intended, partly because of his over-acting, partly because of the script which is, like the rest of the film, functional.

The only scene which really grabs the attention is where Turing finds the key to the code, runs to his beloved ‘Christopher’ (his machine), and watches in amazement as it finally spews forth vital German messages.

On BBC 4 recently, a TV film called Castles in the Sky was shown, about the eccentric inventor and his team who are given a meagre budget to invent the radar. There was a spy in their midst, the military wanted to pull the plug and they worked all night to work the miracle. In that film there was a real sense of what is at stake here – the future of the civilized world, basically – a quality sadly missing in The Imitation Game. Sure there are the usual shots of Hitler and planes bombing Blighty, but a shot of a Panzer tank crushing an allied helmet pretty much sums it up – this is not a film of any subtlety. Visually the TV film was its equal as well, there is nothing remarkable to look at here, and some of the CGI’d bombing scenes are ropey looking.

Overall verdict: Remarkably lackluster telling of an extraordinary story, which deserves far better. The performances are stilted, the script wooden and the whole thing never comes to life. There is a great film to be made about Alan Turing – this is not it.