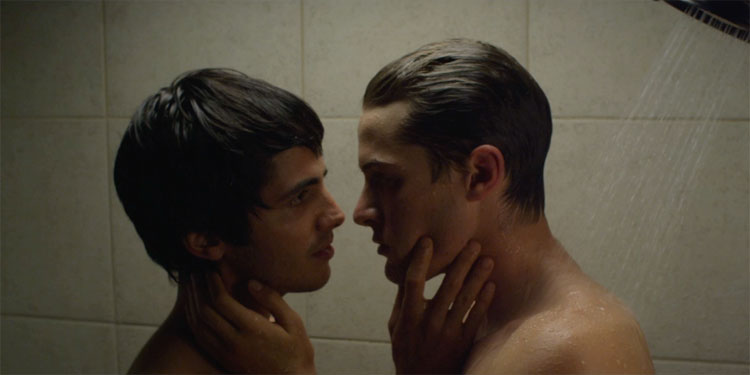 It’s certainly been noticeable in the past year or two that an increasing amount of gay-themed thrillers have been released. Some have been good, some have been dreadful and now we have The Dark Place, which sits somewhere in the middle.

Keegan Dark (Blaise Embry) is a young man who’s long been estranged from his family, but agrees to go with his boyfriend Wil (Timo Descamps) to see his mother at her vineyard. His first shock is that when he arrives he discovers that his mom, Celeste (Shannon Day), has a new husband, Adrian (Andy Copeland), and as a result Keegan suddenly has a stepbrother, Jake (Sean Paul Lockhart).

It doesn’t take long for Keegan to start suspecting that something is amiss, and that Jake in particular could be dangerous. However when both his and his mother’s lives come under threat, Keegan’s checkered history, abrasive personality and photographic memory mean that he seems more likely to be the culprit than the victim. After Wil leaves and his mother falls into a coma, Keegan is determined to find out what is going on, which may have something to do with his own past and the death of his brother.

The Dark Place certainly gets plenty of points for efforts. It’s clear that those involved have a real love of thrillers and have done their level best to make something entertaining and tense. However it’s only partially successful. The film’s largest issue is that like many other indie thrillers, it’s difficult to escape the sense that the story is dragging the characters around, rather than the characters leading the story.

Thankfully though, it makes efforts to ensure this isn’t as much the case with Keegan, and it’s largely successful, even if that does result in him coming across as a bit of an ass a lot of the time. However the others often seem merely to exist to do whatever the story needs them to at that moment, rather than being real people. That’s particularly true of the local policewoman, who would have to be spectacularly dense to jump to the conclusions she does, even if the movie does go to pains to try and explain why she would.

There’s also an almost inevitable decent into the rather silly and preposterous, but this is less of a problem than it might have been, purely because it does a pretty good job of twisting and turning, so that the viewer will keep second-guessing themselves. While it’s not too difficult to work out who the bad guys really are, The Dark Place keeps you wondering exactly why they’re doing what they’re doing, offering a few surprises along the way.

The Dark Place isn’t a great movie, but it is passably entertaining one, and I have to admit that unlike several other gay-themed thrillers over the past year, I never once wished I could switch if off. There’s enough interest and intrigue to ensure you’ll want to know what happens next, even if you might be raising your eyebrows in incredulity when you see what does occur.

Overall Verdict: It may be a bit silly and lots of it doesn’t work, but thanks to the enthusiasm of all involved and its sheer power of will in trying to keep the viewer entertained, The Dark Place just about pulls through.