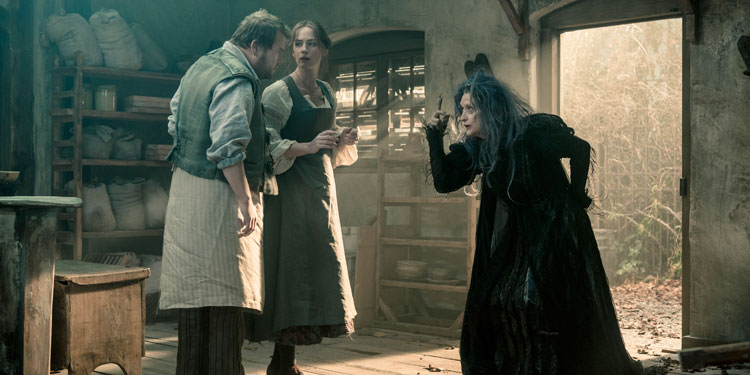 Throw in a top-notch cast – and James Corden – and you get a polished, great-looking and sounding, entertaining fable. The story itself peaks a little early and there are longeurs in the story of the giant, but overall it’s a successful adaptation of Sondheim’s stage musical.

It cleverly throws together several of our favourite stories of childhood – Little Red Riding Hood, Cinderella, Jack and the Beanstalk and Rapunzel – with Meryl Streep’s witch at the centre. She has put a curse on the baker and his wife (Corden and Blunt), who will remain childless unless they bring her four items – a white cow, a golden slipper, corn-coloured hair and a red cape. They have three nights to find these items.

Sondheim uses the dark possibilities of each story with sometimes dazzling effect, and sometimes gets a little close to the bone. Little Red Riding Hood’s encounter with the Wolf (Depp) is very creepy indeed, and borders on paedophilia, with him almost insisting she stop being a little girl and take a risk or two – nearly Jimmy Savile-esque. Cinderella is riddled with self-doubts over the Prince – how can she be what he wants when she doesn’t even know herself? Rapunzel is kept in a tower by her mother the Witch, who refuses to let her out when she reveals a sexual awakening for the prince. The baker is haunted by his father who abandoned him as a baby, and the prospect of becoming a dad himself terrifies him. And poor Jack learns about life the hard way when his favourite cow drops dead en-route to market.

Lyrically Sondheim’s songs are at times truly dazzling – the Witch’s song about why she laid the curse on the baker contains some extraordinary rhymes, and the underlying darkness is never far away. Where it is a let-down is his score – Sondheim’s tunes are never easy, and here they border on the tuneless far too often. The cast give it their best – Streep’s singing in particular is gung-ho and Lilla Crawford as Little Red Riding Hood is just terrific, and never cutesy – but too many songs go by leaving barely a trace of melody.

Visually it has the look for a fairy-tale, with dark lush woods, twisty brambles, lovely moonlit meadows and rural Berkshire doing a good job of looking like a medieval fantasy land. Special effects are kept to a mimimum, but when they do appear they make their mark – the beanstalk is impressive, and Frances de la Tour’s barely-seen giant is a wonder, especially the sound of her footsteps which are literally earth-shaking.

Overall verdict: Successful adaptation of Sondheim’s stage musical which keeps its gothic themes intact. Marvel at the wordplay and top notch acting and don’t worry too much about the lack of harmonies in the music.