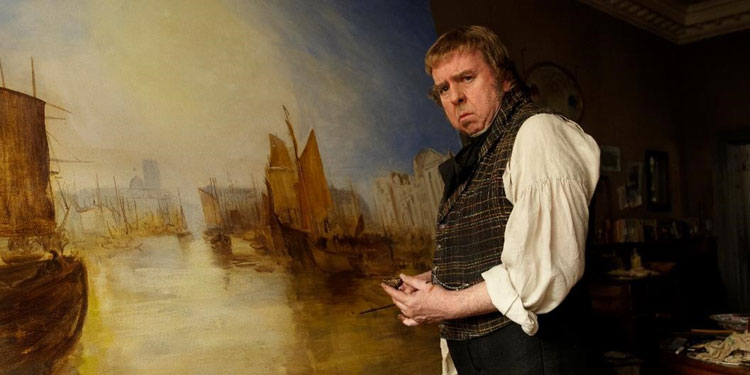 While it may not be plot heavy, that’s not to say it lacks incident, with Turner loved by some, loved by others and living a life that is part high society, part working class and part living by the rules of his own desires. He is profoundly affected by his father’s death, and for a mid 19th Century man possesses an attitude to women that ranges from extremely forward-thinking to the extremely base – working with a female natural scientist but simultaneously taking sexual advantage of his servant – before ending up secretly living with a woman he never marries.

With his paintings he amazes and infuriates. The establishment cannot doubt his talent, but many find it difficult to understand what he’s doing, especially as his paintings and technique become increasingly freeform and point towards the abstract. It gets to the point where his actions seem almost like madness, with many wondering whether he’s genuinely taken leave of his senses. It’s a seeming madness that continues to grow as he attempts to find new ways to depict the world around him, such as being tied to the mast of a ship so that he can see a snowstorm at sea that he wants to paint, and exhibiting paintings that don’t initially appear to be of anything except swirling yellow colours.

It is a character study in the truest sense, looking at a man who helped to change art but is presented here as merely trying to express the world around him. Timothy Spall is wonderful in the lead role, giving Turner a bit of a gruff, grunting, geezer vibe – a man whose art is a reflection of the fact that he sits slightly to one side of the world he’s a part of.

Perhaps it shouldn’t be a surprise that it works as it comes from Mike Leigh, a filmmaker where even his minor movies are worth watching. While not one of his best, Mr. Turner is far from his worst, and benefits from Leigh’s technique of using his actors to extensively improvise around the scenes he’s set out, before he refines it into a script. It allows a naturalness and feel for how people really interact that’s rare in film, and ensures that a movie that is more a look at a life rather than a series of plot points manages to keep your interest all the way through. There are times when it really does become a series of scenes that individually have nothing to do with one another or with the main thrust of the film, but it all weaves together to form a rich tapestry.

It also benefits from cinematographer Dick Pope, who manages to create some arresting images, some of which marvellously capture Turner’s fascination with the luminous abilities of light as the sun comes through the atmosphere.

It’s interesting the film comes out just a week after Effie Gray, as that film was about John Ruskin, the art critic who was one of Turner’s greatest defenders and helped ensure that his paintings became central to the story of British art. However if you put the two movies side by side, it’s difficult to imagine they’re about people who inhabit the same world. In Mr. Turner Ruskin is a young, effete, pretentious pillock – far from the middle-aged, austere almost emotionless man of Effie Gray, even though they’re both set around the same time (at one point Ruskin even mentions his wife Effie). They are very different films, and just go to show how period movies really do create a world rather than just point a lens at the past as it was.

Overall Verdict: It may sometimes feel like a series of scenes that don’t immediately show their connection to one another, but allowing the movie to wash over you as a whole allows Mr. Turner to reveal its immense charm and creates a fascinating picture of a man and a moment in art.