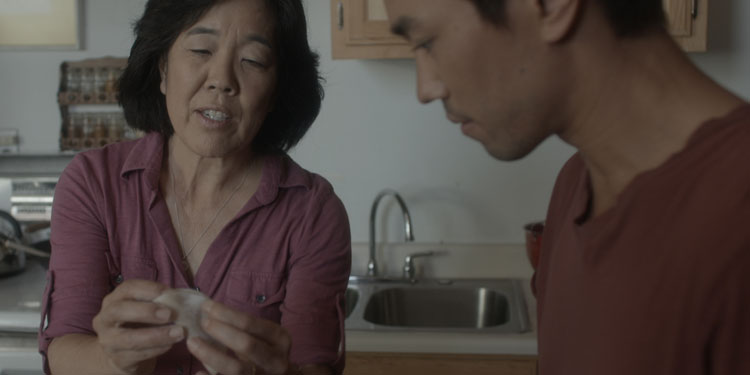 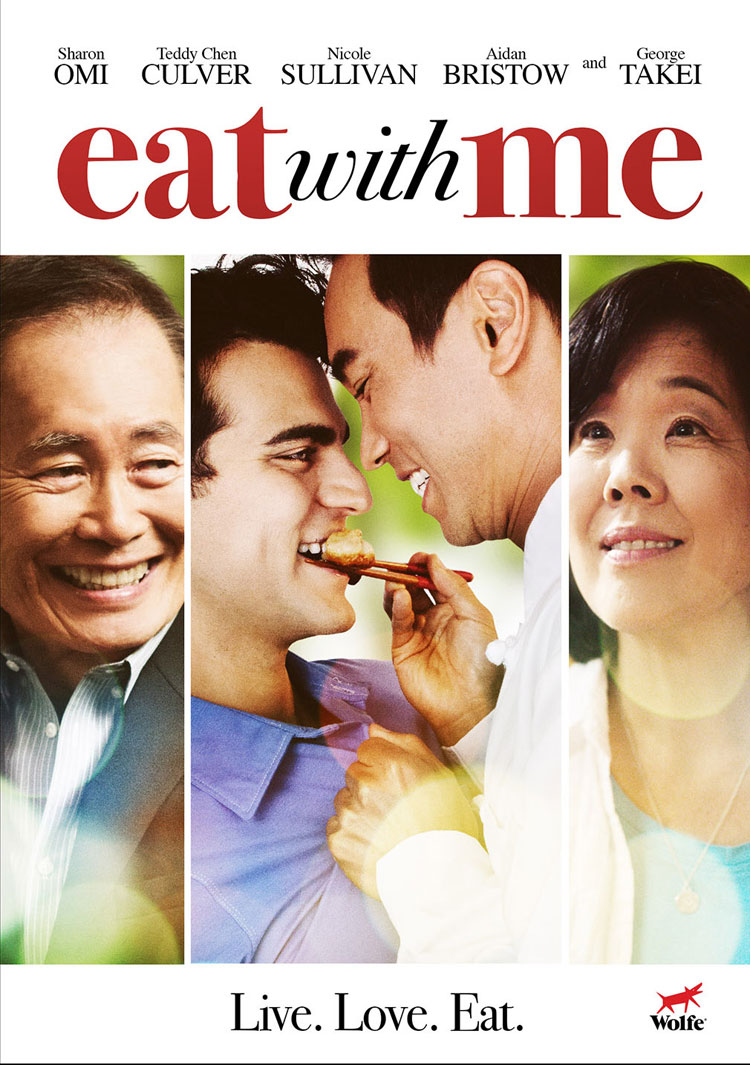 Elliot (Teddy Chen Culver) is a gay man running a Chinese restaurant (which is in major financial trouble). He’s trying to figure out his love life, which certainly isn’t devoid of men but none of them are around for long. His life is shaken up when his mother, Emma (Sharon Omi), turns up on his doorstep and asks to stay for a while.

It appears she’s left Elliot’s rather thoughtless and selfish father, although she doesn’t want to talk about it. There’s also the added complication that while Emma knows her son is gay, she’s not comfortable with it and isn’t sure how to reconcile it in her own mind. However with the help of Elliot’s next door neighbour (Nicole Sullivan), Emma begins to find a new way to look at her life and her possibilities. For Elliot meanwhile, having his mother stay forces him to re-evaluate his tendency to push possible relationships away.

Eat With Me is a sweet, witty and rather charming movie. While there are plenty of coming out films, there are fewer ‘after coming out’ movies. Coming out movies tend to treat the moment someone says ‘I’m gay’ as the end of the story, however most LGBT people know that it’s not that simple, not just because you have to keep saying it to new people, but also because there are various levels of coming out and of acceptance.

Here Emma knows her son is gay and while she’s not happy about it, she has accepted it and isn’t trying to change him. The film sees them negotiating the next steps, such as Emma having her preconceptions about gay people challenged. It’s nice that when they are challenged, rather than simply saying every preconception Emma has about gay people is prejudiced and incorrect, it’s her view of things such as promiscuity that may be wrong.

What Emma and Elliot also have to face is that there can be a difference between knowing that someone is gay in theory and dealing with that in practice. It’s something many gay people will recognise, especially if you’ve ever had friends or acquaintances who are totally ‘cool’ with your sexuality when it’s purely theoretical, but then don’t know what to do with themselves if they see you actually doing something gay, and make the whole situation feel horribly awkward. And it’s not a one-way street, as not only does Emma need to face the fact that her son dates guys in reality and not just in theory, but Elliot almost needs to force himself to show his mother he really does like men, by setting up an accidentally-on-purpose scenario that presses the issue.

It’s also great to see a film where the main characters aren’t white, but while their Asian-American cultural heritage informs the characters, the plot isn’t so hung up on their race that it becomes absolutely intrinsic to everything they do. In stereotyped, mainstream Hollywood land, there would be a lot of talk of dishonouring ancestors and homosexuality not being part of their culture (while Elliot did martial arts and maths homework, of course), but the movie isn’t interested in those sorts of clichés. Indeed it comes up with a neat metaphor for the synthesis of different cultures and the fact we share more than we don’t, with the idea of Chinese dumplings stuffed with various sorts of fast food.

Sharon Omi is wonderful as Emma, a middle-aged woman who knows she’s living a small life and wants far more from her remaining years. Omi is one of those actresses many will recognise from endless supporting roles in Hollywood movies and guest spots on TV shows, but here she shows she more than has the ability to hold a film on her own. To be honest the pickings are slim when it comes to movies centred around middle-aged Asian-American women, but Omi shows that’s rather short-sighted on the film world’s part.

There’s also a brief cameo from George Takei, playing himself, who reminds us that before he was the king of social media and a master at showing society that LGBT people are part of ‘us’ and not just a ‘them’, he was an actor – and a pretty good one at that.

Overall Verdict: Eat With Me is a movie that’s well worth seeking out, as it’s extremely heartfelt, sweet and entertaining, dealing with great empathy with a variety of issues, from facing middle-age and wanting more from life, to dealing with sexuality not just for the family of a gay person but also for the person themselves.