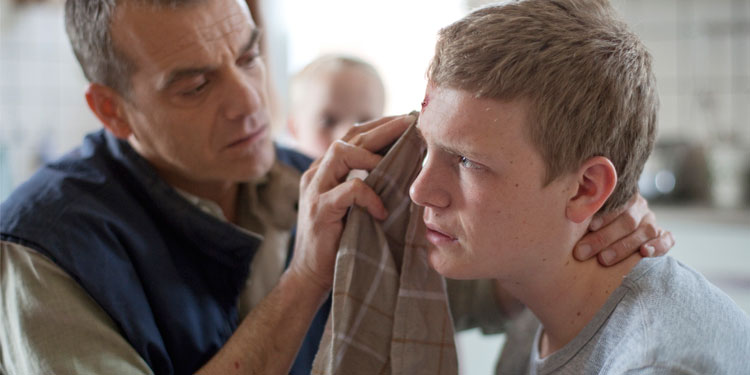 Then there’s young farmhand Henk, who is almost as quiet as Helmer, but who awakens feelings the farmer has repressed and which he may still not be ready to deal with.

This isn’t a movie for everyone. That’s partly because, as the title suggests, it is very quiet. The film attempts to reveal what is inside the characters through their actions (or lack thereof) rather than their words. Helmer spends a decent chunk of It’s All So Quiet sitting completely still looking at the wall. That may sound incredibly dull, but the film successfully builds a picture of a man who is so repressed and pulled away from everything that he now has an existence as much as a life. There’s the constant feeling that he wants something else, but has reached the point where he believes his small, sad, constrained reality is all that is possible.

However, he has perhaps convinced himself of this so much, that he doesn’t even notice the possibilities of the world around him.

The fact the film is based on a novel by Gerbrand Bakker called The Twin hints that perhaps Henk is almost Helmer as he was when he was young and there was still the possibility for him to reach out and live a more fulfilled life where he accepted his sexuality, if only the right circumstances had presented themselves. His father meanwhile may represent where Helmer is headed if nothing changes – left with nothing but regret and waiting for death.

However, perhaps Henk’s actions may open up a glimmer of hope for Helmer’s future.

Click here to watch the It’s All So Quiet trailer.

It may not be the most exciting of movies, but It’s All So Quiet is thoughtful and surprisingly interesting. To get the most from it, you do need to be able to appreciate a film that asks the audience to build a picture rather than holding their hand and telling them explicitly who these people are. If you can do that, the quietness and solitude the movie exudes are palpable, and while it may have a few too many shots where little is outwardly happening, it is effectiveness in building a picture of an unlived life, and done in a way that film would normally shy away from.

Overall Verdict: For many it will be far too quiet and lacking in action and explanation, but for those willing to do the work, It’s All So Quiet is a melancholic but surprisingly affecting look at isolation and sadness, seen through the eyes of someone whose sexuality and possibilities lie hidden perhaps even from his own consciousness.