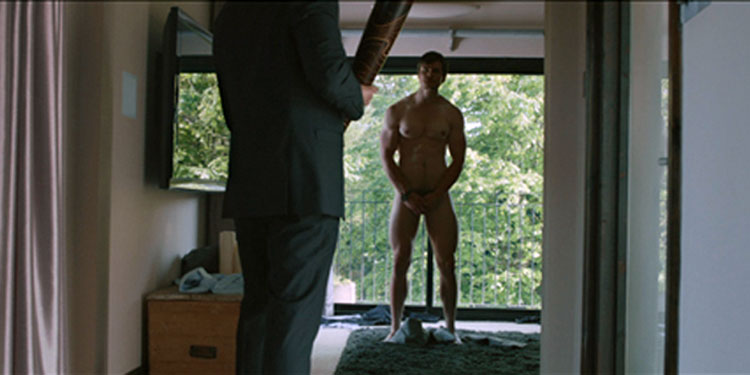 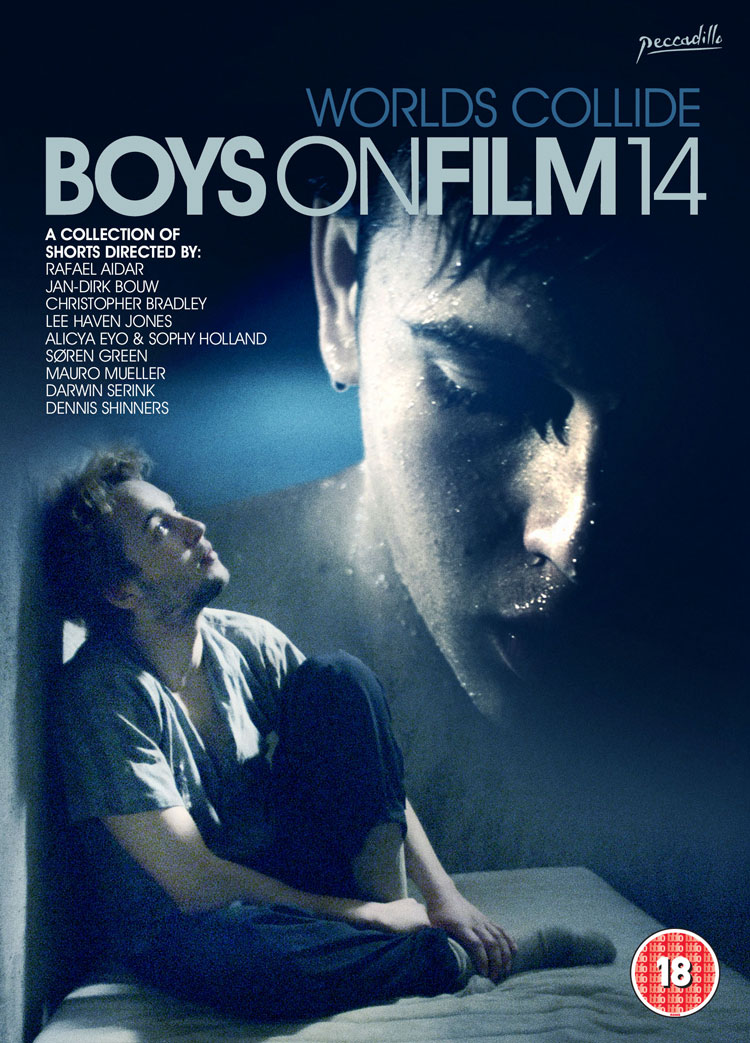 Want It – dir. Lee Haven Jones (UK) 11 mins 2015
In Want it an intruder breaks into a luxurious home. However, when the owner returns things get precarious for the potential thief. Having screened at the likes of the San Diego Film Festival and BFI Flare, Want It has a pretty good pedigree. It’s well made and at times perversely sexy – especially when the homeowner demands the intruder strips naked – but it soon becomes clear where the short is heading. Unfortunately it’s a slightly overplayed idea and Want It doesn’t have a hugh amount to add to it. Up until that point, it’s very good though.
7 out of 10

{Brace} – dir. Alicya Eyo and Sophy Holland (UK) 24 mins 2013
Adam breaks up with the woman he’s living with and then heads out into the pulsing world of London’s gay scene. There he meets handsome and mysterious drifter Rocky, who he feels an instant connection to. The longest film in the collection, {Brace} is an interesting and smartly told tale, interspersing the excitement of Adam’s new life, with the more everyday difficulties of breaking up with his girlfriend and coming out to his family. As it slowly begins to reveal itself, for example letting us know that there’s something Rocky wants to tell Adam but which Adam resists knowing, it ensures it keeps you pulled in as it plays with whether society’s lingering homophobia is as dangerous as Rocky worries it might be. As it reveals why Rocky is so edgy, as well as questioning Adam’s ideas and motivations, it moves in increasingly interesting and challenging directions, offering more than a few unexpected moments.
6 out of 10

Un Mundo Para Raúl – dir. Mauro Mueller (Mexico, Switzerland/USA) 14 mins 2012
Raul is a working class, thirteen-year-old, who is asked to head for the luxurious surroundings of the local landowner’s house in order to entertain the man’s son. The two young men knew each other when they were younger, but with both of them on the verge of manhood, things have changed both physically and in their understanding of their positions in the world. A game of power and pride grows, which reaches a head when things turn sexual in the swimming pool. Un Mundo Para Raúl starts out as an interesting and entertaining dissection of two young men finding their way in the world now that they’re both nearing adulthood, however as it goes on things get more disturbing and difficult, especially when power, social position and sex are brought together in two such young people. It’s a surprisingly thought-provoking short film.
6 out of 10

Barrio Boy – dir. Dennis Shinners (USA) 8 mins 2014
It’s a hot and sweaty day in Brooklyn, and a barber open up his shop. A handsome Irish stranger walks in wanting a haircut. In his head the barber almost immediately falls in love, letting us know via voiceover his feelings as he washes and cuts the man’s hair. However, in the Brooklyn hood he also knows that you can’t say you’re gay out loud if you don’t want major trouble, and so it seems the man’s feelings will have to stay within his head. A sweet, rewarding, award-winning short, Barrio Boy will resonate with those of us whose imagination can sometimes run riot, as well as finding a smart way to look at all the thoughts and feelings all of us have, but which for one reason or another we don’t feel we can express.
7 out of 10

Aban and Khorshid – dir. Darwin Serink (USA) 13 mins 2014
Inspired by a true story, Aban and Khorshid follows two young Iranian men, cutting between the sweet and happy domesticity they shared and their later lives in prison, where they await sentencing for the crime of loving one another. It eventually leads to the shocking image which inspired the short film. Aban and Khorshid questions how you would spend your final hours, especially knowing that it is the fact you love the ‘wrong’ person that could end your life. The film uses the footage of the happiness of their early relationship to really drive home quite how horrific their predicament is, as well as to help wake people up who might normally ignore the fact that globally homophobia is not an issue that’s being consigned to the dustbin of history. As you might have guessed, it is not a fun watch, but it is a rewarding one that will keep you thinking long after it’s finished. The darkness ratchets up so that even at only 13 minutes long, it becomes increasingly difficult to watch – but it never feels less than necessary.
8 out of 10

I Love Hooligans – dir. Jan-Dirk Bouw (Netherlands/ Belgium) 13 mins 2013
This animated short takes us into the world of football hooligans, where an all-consuming love for a particular club is mixed with machismo and violence. However the hooligan the film is about is also gay, something he knows doesn’t fit with the world he is part of, and which could put his life in danger if it’s ever discovered. Based around a real interview with a gay hooligan, the film successfully sets out the fascinating and contradictory dynamic of a man whose identity is split between two different and mutually exclusive worlds. I Love Hooligans is fascinated with how he can feel so strongly part of a world that would hate him if it knew he was gay, as well as why anyone at all would identify with the ugly, angry and violent world of hooliganism, which often seems so alien to those on the outside. It’s a fascinating subject and the film handles it extremely well.
8 out of 10

Watch the trailer for Boys On Film 14: When Worlds Collide.

The Violation – dir. Christopher Bradley (USA) 13 mins 2013
Teenager Mickey spies on his neighbour Oscar through a telescope, where he sees Oscar ‘romancing’ a pillow dressed in a bikini. It soon becomes apparent that the swimsuit belongs to Mickey’s sister. The Violation very quickly sets up its dynamic, as well as the fact that maybe these young people don’t always handle their attractions in the best way. Things get even more complicated when Mickey is house-sitting in Oscar’s house, and decides to take a look around Oscar’s bedroom. Right from the outset The Violation manages to create a feeling of tension, with burgeoning sexual desire pushing someone to act in ways they know they probably shouldn’t. With a cameo from the wonderful Beth Grant, The Violation is far more morally complex than it first appears and all the better for it. It might have been nice if it had gone a little further, but it’s still an interesting film.
7 out of 10

The Package – dir. Rafael Aidar (Brazil) 18 mins 2012
No, the title isn’t referring to the sort of package you’re thinking of, you pervert. Instead it follows Leandro, who is just starting at a new school. He quickly forms a strong friendship with Jefferson, which looks like it may be developing into something more. However, Jefferson has something he needs to tell Leandro, because, as his teacher explains, being honest about it is part of the package. This short film takes what in ideal world should be something simple, but because of social issues and prejudice, is far more difficult than it ought to be. Handled with compassion and feeling, The Package is a well-made and surprisingly sweet film that’s oddly charming.
7 out of 10

An Afternoon – dir. Søren Green (Denmark) 8 mins 2014
Teenager Mathias is in love with his friend Frederik, but has never been brave enough to tell him. However, he decides that now is the time, although knowing he want to do it and actually saying it are two different things. With many of the short films in the collection being pretty challenging and dark, it’s nice to end things with something a little simpler and very easy to relate to. Most of us will have been in a situation where you have feelings for someone but don’t know whether they feel the same way – and even if they do that the road to figuring that out can be tricky. An Afternoon is a good way to put a smile on your face at the end of Boys On Film 14, telling a sweet tale in a direct and amiable way, while playing with how bad we can sometimes be at saying what we really think, especially when we’re young.
7 out of 10

Overall Verdict: Themed around dealing with sexuality across societal and class divides, Boys On Film 14 is another successful and very interesting collection of gay-themed short film that is well worth a watch. It is however darker than some previous instalment, so don’t expect every one of the movies to make you feel all warm and fuzzy.