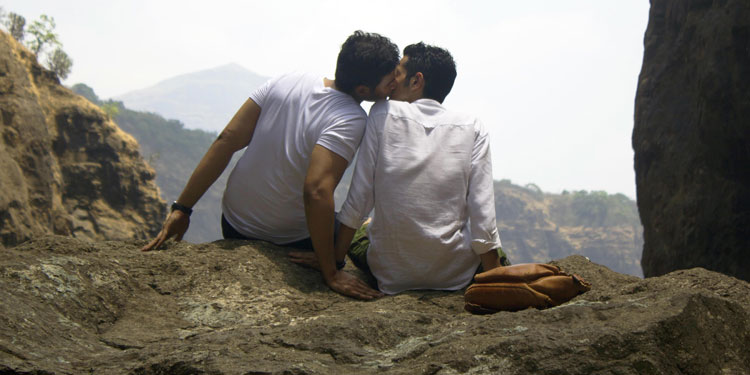 Sahil is a young, Indian music producer who’s getting increasingly frustrated by his boyfriend, who seems incapable of taking anything seriously or remembering something as simple as paying a bill. When Sahil’s longtime friend Jai – who’s now a Wall Street hotshot – reveals he’s heading to Mumbai for the weekend, Sahil drops everything to go and see him.

Heading off into the countryside and then back into the city, the duo delicately negotiate their feelings for one another, trying to figure out whether there is something more there than friendship. However, is there potential for love, or is Sahil – as Jai begins to suspect – really interested in the escape to a more luxurious and exciting life that Jai’s money can buy?

Of course there’s also Sahil’s boyfriend, who turns up towards the end of the weekend with another guy in tow.

Loev was shot in India but had to do so in secrecy due to the fact that homosexuality is still illegal in the country (while the criminalisation of gay sex was ruled unconstitutional in 2009, it was recriminalized by another court in 2013) and that is still seen as a major taboo in large parts of the country. Loev has a lot of passion and heart as it tenderly unpacks a longtime friendship that may be on the cusp of either becoming something more or otherwise possibly imploding.

Unfortunately though, there are a few moments in Loev that don’t really work, where you can see what the filmmakers were trying to do, but don’t succeed emotionally or for the characters. Thankfully these moments don’t overpower the rest of the movie, with both the script and the acting keeping you pulled in and wanting to know where it will go.

That said, there is a scene towards the end that nearly destroys everything. It’s something a few gay films have done which, if they were done in the same way between a man and a woman, the character who did it would be considered completely irredeemable and the lack of repercussions would be seen as almost irresponsible on the filmmaker’s part. Although you can see the film’s rationale – not least to create a moment of emotional crisis, danger and a point of no return where something has to change – it is unpleasantly extreme and some will undoubtedly feel that using it purely for dramatic purposes with no real ramifications is indefensible.

I’m not 100% sure whether it is something we can overlook or not, and to be honest I don’t think the film needs it as it’s almost a crutch. All around it the film is interesting, often intriguing and sometimes quite sweet. That’s particularly true early on when it’s dealing with a friendship where the duo almost revert to a childlike state when they meet. They then have to switch to dealing with their adult lives and also figuring out whether their playfulness is a way of not really dealing with what’s going on between then. When it’s doing that, it’s extremely well handled. This section also allows the movie to show off some of the startling beauty of India.

Again, after the extreme incident, it again becomes interesting and smart with a scene where Sahil, Jai, Sahil’s boyfriend and another guy all sit down for dinner and without actually saying it out loud, try to work out where they all stand (although not really dealing with what’s just happened). There’s a huge amount of potential here and a fair amount of success, but a couple of rough edges mean it’s not a complete success.

Overall Verdict: Often smart, charming and intriguing as it explores a relationship that may be on the cusp of becoming something more, Loev sometimes undermines that (particularly with one scene), but still offers enough to make it worth watching.

Loev recently had its North American debut at SXSW and screens on March 21st, 23rd and 25th, 2016, at the BFI Flare London LGBT Film Festival.