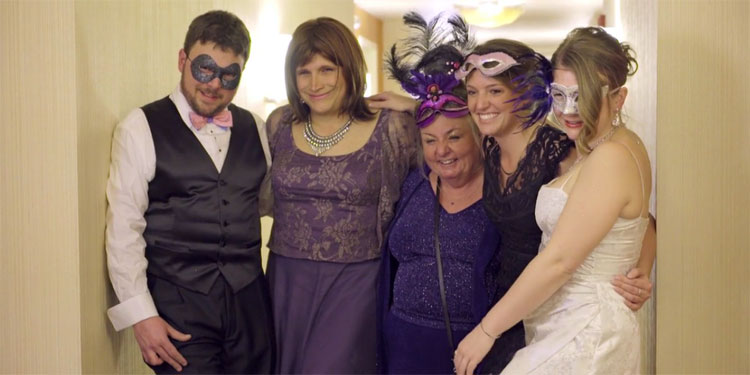 Derek Hallquist has worked as a cinematographer on documentaries such as Freakonomics, but decides with Denial that due to his strong interest in climate change, he will turn the camera on his father, Dave, who runs a small energy company in Vermont, which is working to increase the amount of renewable energy the US produces.

However, there is a problem, which is that while the nation’s enormous electricity grid works okay with the amount of wind and solar energy produced at the moment, it will have increasing problems as more is created. The wind and sun aren’t reliable in terms of the amount of energy they can produce at different times of the day, and with no economical way to store excess energy for use when the wind dies down or the sun goes behind clouds, there will be large issues if there’s high demand and not enough sun or wind to meet that. Dave thinks the answer is smart products, which can talk to the grid and adjust their power demands depending on the supply – taking more when it’s plentiful and less when it isn’t.

Unsurprisingly, with many politicians still sceptical about the existence of climate change, and the fact that what he’s talking about sounds difficult and potentially raises privacy concerns, it’s difficult to get people to listen.

Initially that’s all the documentary was supposed to be about. However, Dave has something else going on in his life, which is that after decades of holding it inside, and with his kids now grown, he’s decided to be open with them about the fact he is transgender and will be spending an increasing amount of his time living as a woman.

Derek is initially shocked by the news, but as he increasingly accepts the idea and meets his father’s more authentic self, Christine, he starts to become more concerned about her apparent flip-flopping on important issues surrounding renewables, and wonders whether Christine’s private struggles may be reflected in her public life as Dave. Are Christine’s worries about being rejected by society and others around her allied to her decision to call for a moratorium on new renewable energy projects in Vermont – where she’s also concerned society isn’t ready to accept the truth? However, as she becomes more comfortable living more publicly as a woman, Christine also begins to find a renewed passion for moving forward to find solutions, rather than stopping everything until the problems have already gone away.

Initially the two sides of the documentary – renewable energy and a transgender woman’s journey – are slightly uncomfortable bedfellows. While the film tries to draw parallels and both sides are interesting, there’s a slight sense that you’re watching two different documentaries rubbing alongside one another, rather than one. This may be due to Derek’s initial mixed feelings about his father’s revelation, where he knows the truth lies in telling both aspects of the story, but he is still compartmentalising things and in his head is still splitting Dave the energy engineer, from Christine the transgender woman.

It’s as the documentary goes on that it pulls together movie. It feels as if Derek is increasingly realising that Dave and Christine are not completely separate entities, as well that the journey his father is on in terms of both being transgender and trying to fight back against climate, is all part of the same story, rather than two things that sit beside one another.

Denial could perhaps have spent a little more time simply delineating what the issues surrounding the increasing use of renewable energy are, but that’s a minor quibble. It has plenty to hold your interest though, particularly in the final third, where it begins to more strongly show the effects of denial on both Christine and some people’s attitudes towards climate change – some things are painful and difficult, and it’s easier to try to ignore them than deal with them. However, Dave’s transition to Christine, as difficult and with a much uncertainty as it causes, shows there is a way forward, and that while people may not like change, when confronted with a truth they cannot deny, many will adapt to it and learn from it. It also shows that the alternative – pretending the truth is something else – isn’t good for anyone.

Overall Verdict: It’s often interesting when events overtake a documentary and it ends up being about something different to what was originally intended, and that’s certainly true here. While renewable energy and a transgender woman’s transition initially seem to have little to do with one another, Denial draws out the parallels, not least the transformative possibilities for change, no matter how difficult or filled with uncertainty the journey is.