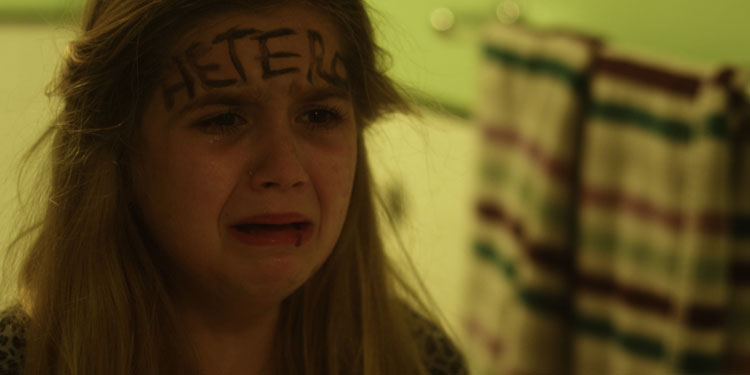 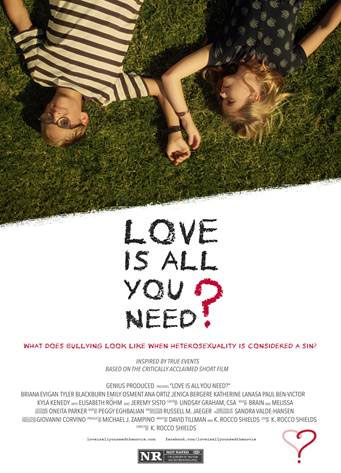 The basic set-up is the same, taking us into a world where nearly everyone is paired up in same-sex couples, and those who fall for someone of a different gender are looked down on and vilified. Jude (Evigan) is a female football star at her high school, with a gorgeous girlfriend (Osment) and plenty of popularity. However, when she meets university fraternity pledge Ryan (Blackburn), unexpected thoughts start to emerge. As their relationship develops, Jude begins to wonder whether she’s really a ‘ro’ (a derogatory shortening of heterosexual).

There’s also the younger Emily, who already seems aware she may be interested in boys, rather than the girls her mothers and society expect her to fall for. She befriends Ian, who she begins to have feelings for and suspects might feel the same way. When her liberal teacher (Sisto) announces that rather than doing the usual Romeo & Julio, they’ll be turning it hetero by performing Romeo & Juliet, Emily is excited, while many others aren’t so sure.

Connected to all of them is the Reverend Rachael (Röhm), a fundamentalist Christian who believes God is clear that only homosexual relationships are acceptable, and that people should do whatever it takes to stamp out perverted heterosexual behaviour. Jude, Ryan, Emily and others all begin to face increasing prejudice and threats, which begin to turn deadly.

Love Is All You Need? is far from the first film to present an alternate role-reversal world. Many of these movies have been hampered by seeming rather heavy-handed, obvious and melodramatic, bashing you over the head with their allegories in a slightly eye-rolling way. Unfortunately, this new movie doesn’t fully escape that, although it manages to stay on the right side of it for much of its running time. Indeed, it’s only towards the end that some will feel it’s becoming a little histrionic and taking things too far.

I think the problem is partly who the audience is supposed to be. I suspect that so-called Social Justice Warriors will love it, as it will reaffirm a worldview that paints straight people as evil oppressors. There’ll also be appreciation from those people who may not be big fans of gay people, but have an open mind. Indeed, on that score it may be quite successful, as it’s been shown that one of the best ways to get across an argument to those who oppose you, is to show the common ground and, if possible, how your positions aren’t as different as they might appear. By reversing the roles, Love Is All You Need? does a good job of showing homophobic straight people the basic unfairness of their position on a human level. That said, it’s likely to turn a lot of them off by painting religion as such a one-dimensional villain.

Click here to watch the trailer for Love Is All You Need?

For gay audiences it’s more difficult, partly because it’s so focussed on the terrible things that will happen to ‘ros’ once people find out what they are. It’s partly problematic because the film is unclear on the internal rules of this alternate world. Is it supposed to be exactly the same as our world but reversed, or has it taken the homophobia (or in this case, heterophobia) to the extreme? If the former, you can certainly understand the angry, violent and dark direction it takes all of its stories as it’s trying to make a point about prejudice, but it still seems a little over-the-top within the context of the film. There so little counterpoint to its depiction of prejudice and bigotry, except for one background heterosexual couple who seem relatively normal, that it feels like it’s taking things too far.

You can perfectly understand why it does it, as it’s trying to show the dangers and intolerance LGBT people really face, where violence and even murder are not out of the question. However, it’s so focussed on them that it presents it as pretty much an inevitability, where every gay person will live a life of misery and isolation. It gets to the point where if I was a young gay person thinking of coming out, this film might terrify me so much I’d not just stay in the closet, I’d put an extra lock on the door.

It seems a shame to be negative, as all involved should be applauded for what they’re trying to do – to show exactly what the repercussions of homophobia can be, and that if roles were reversed how instantly unfair it would seem. Unfortunately, like many before it, it’s fallen into the trap of bombast and a single-minded focus on showing a narrow truth, so that it doesn’t feel quite real due to the fact it ignores wider truths. That said, there will definitely be many who will appreciate it. That’s especially true as the first half, where it’s focussing of new desires and the emergence of love between people of different genders in a difficult environment, is pretty well handled and sometimes quite moving. Some will also find the ending both provocative and perhaps even a bit of a call-to-action. Other though, myself included, will find it a bit over-the-top and maybe even a little myopic about the effects and repercussions of homophobia.

Overall Verdict: A valiant attempt to explore homophobia through an alternate reality, and perhaps to show ambivalent straight people the unfairness of oppressing LGBT people. However, by taking things to the extreme in an attempt to drive the point home, it ultimately undermines much of the good work it’s done up to that point.