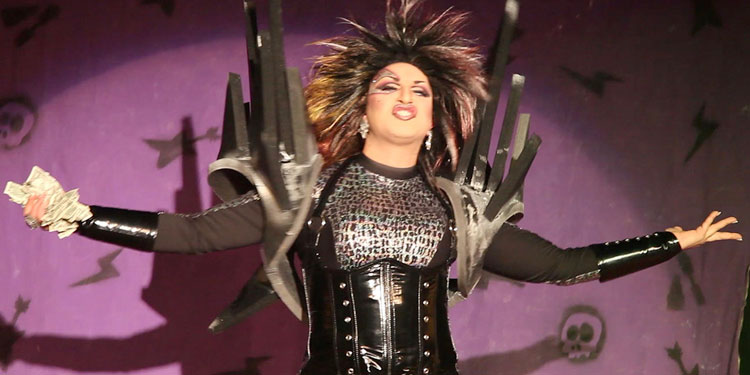 Who knew that Columbus, Ohio was a hotbed of drag? Well, I expect a lot of the LGBT residents of the city knew, but it’ll come as a surprise to most of the rest of us. Director Gabrielle Burton delves deep into that world in her documentary, Kings, Queens & In-Betweens.

Across its 90-minutes the film attempts to highlight the diversity of the drag world, which isn’t just about gay men going on stage dressed as caricatured women. There are also drag kings, some identifying as women, some men and others living between the two genders. Likewise, while most of the drag queens are happy to pull off the costume and makeup, and live as men for the rest of their lives, the documentary introduces us to at least one for whom drag became an outlet until they transitioned to living as a woman full-time.

As some other documentaries have realised, there is a lot more to drag than just silliness, costumes, a bit of creativity and people lip-syncing to popular songs. It’s a place where sex, gender, feminism and sexuality meet, and sometimes butt heads. For example, is a drag queen expressing themselves and celebrating strong womanhood, or are they making fun of women and also (perhaps inadvertently) furthering the idea among bigots that trans women are just men in dresses?

Kings, Queens & In-Betweens goes some way to attempting to unpack some of the political and philosophical ideas surrounding drag, but as with some other drag docs, it ultimately finds that while it can introduce audiences to plenty of interesting ideas, getting to some sort of truth proves more elusive. That’s partly due to the fact that while some involved in drag are consciously doing it as a political act and challenging ideas about gender and sexuality, others are doing it for entertainment or just a paycheque. They may not think they’re doing anything political or socially challenging, but as the documentary shows, they are. However, as they don’t know that, or at least haven’t fully thought about all the ramifications, it’s sometimes makes it difficult for the film to delve as deep into the meaning of what they’re doing as it might like.

What it does do a good job of though is laying out the issues and the ideas about drag. It also becomes a real celebration of diversity. In many people’s minds the Midwest of the US is not a place that’s welcoming of anything LGBT. However, Columbus doesn’t just have a thriving drag scene, but it’s become a place where the downtown is remarkably inclusive, with a community that stretches beyond the expected ideas about L, G, B & T, to those whose gender and sexual expression lies somewhere else. While the documentary doesn’t hide the fact that this can cause issues – such as a trans man talking about how they are criticised for not slotting into traditional masculine roles – it is largely a salute to the diversity of life and the fact that such a thriving community can exist in an unexpected place.

It’s also keen to highlight that drag is not split solely into the extremes of the metropolitan queens of Drag Race and the rather messy, lazy, smutty drag acts of gay dive bars. Columbus is home to a wide variety of drag acts, but what’s particularly nice is how seriously and creatively they take it. There are those making thought-out statements, and those who’ve put in weeks of rehearsal to create the best, glitziest show imaginable. Some are largely doing it for fun, some are looking for a feeling of empowerment, acceptance and belonging, and some to make money. It also has more than a few interesting moments, such as a gay couple where one has almost deliberately learned nothing about his partner’s drag life, as well as relationships that have gone through issues of gender identity.

It is certainly an interesting world, and a fairly enjoyable one to spend 90 minutes in, even if there are times when it’s difficult not to feel there is more going on underneath the costumes and pageantry than the documentary is able to fully dig into. However, as a look at diversity it works extremely well, showing the complexity of the world we live in, and how both people and relationships often stretch way beyond the boxes we typically like to put them in. And the fact all this is taking place in an area of the US where stereotypes say such public celebrations of the variety of human sexual and gender expression shouldn’t exist, makes it all the more intriguing.

Overall Verdict: A worthwhile look into the surprisingly vibrant drag world of Columbus, Ohio, revealing a diversity and celebration of difference you might not expect from the American Midwest.