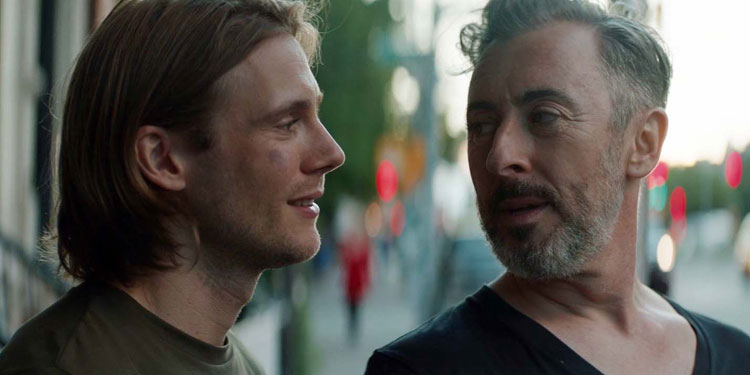 He meets the much younger Braeden (Zachary Booth), initially assuming the young man must be a rent boy, and so pays him for sex. Braeden also has a boyfriend, but starts to see more of Sam. They start to challenge each other’s assumption, with Sam angry that the younger generation don’t seem to care about the AIDS crisis and the battle against heteronormative culture he and his friends engaged in. Braeden meanwhile shows him that his generation have a very different experience of the world – and HIV – and that while Sam’s generation’s battles helped pave the way for that, it’s impossible for younger people to truly comprehend what it was like to watch so many people die amidst a society that didn’t care and in many cases attacked them.

It’s a movie that could have seemed preachy, but manages to pull its ideas through the prism of the characters and so manages to entertain while also informing. The characters are all flawed people. It would have been easy to turn Sam into a plaster saint – a lone voice crying out about young LGBT’s people’s indifferent to their past. However, the film is interested in something a bit more complex than that, exploring the impact of AIDS on the generation that survived the crisis and how it is difficult for many that the deaths of tens of thousands of people is now treated by many – including many younger gay people – as just a footnote in history. Not just that, but After Louie wants to be fair to the lives of younger gay people, for whom AIDS/HIV never completely went away, but who have a very different relationship to it.

Part of the problem is that so little LGBT history is taught in schools, that for gay people who grew up in the 90s and beyond, it’s not surprising AIDS in the 80s and early 90s seems a slightly tangential issue – it becomes difficult to make it feel like it’s something that’s about them. Films like this are a reaction to that, but unlike some, it’s more self-aware of the generational changes and that we are now living in a very different world for gay people.

It’s not just with issues surrounding AIDS, as Sam is also angry about how he felt he was fighting for queer culture and against the heterosexual norms, but now that ‘culture’ is something very different – some would say dead – and that with things such as same sex marriage, queer life is far more heteronormative. However, the movie hints towards ideas of whether the fight for a queer culture aside from the heterosexual world, was as much about sticking its finger up to a world that hated them as it was about finding a truly new way of living.

Indeed, it’s interesting with Braeden, who to a certain extent is living the life Sam was fighting for – with a boyfriend, but able to have sex with whoever he wants, whenever he wants, and without society trying to stop him. However, Sam has difficulty understanding this without the anger and confrontation that his generation had. Ultimately he’s now alone, unable to think a younger man would be interested in him if they didn’t want money (although there is a hint in the film about that being a defence mechanism).

Is Sam’s problem that his generation did an important job that’s now finished – or at least drastically changed – but he’s been unable to move on from that? Or is it that the gay world has become complacent, ignoring the lessons of its past and seduced by the comparative ease of a heteronormative life? The film doesn’t ultimately come to any conclusions, other than that both sides are probably at least partly true.

It’s an interesting, thoughtful and entertaining film. It doesn’t hurt either that it’s sometimes quite sexy, or that Zachary Booth is incredibly cute.

Overall Verdict: In the last few years there have been quite a few films and documentaries about the AIDS crisis, often feeling angry that something so powerful seems to be being forgotten by younger generations. After Louie takes that on, giving a well thought out look at the issues involved, not just during the crisis but how it is seen now.