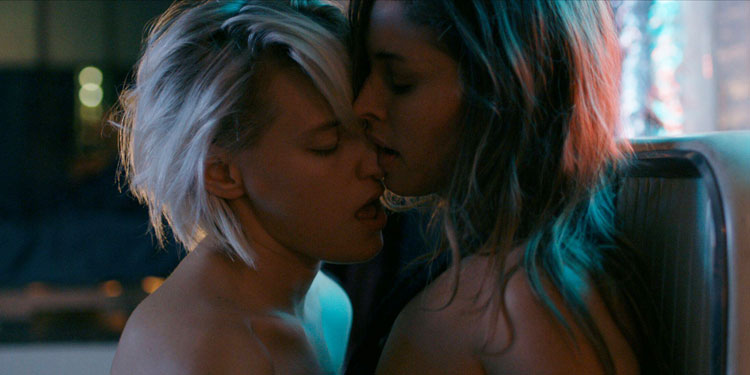 Below Her Mouth has attracted interest partly because of the unfortunately unusual fact that it was made with an all-female crew.

Dallas (Erika Linder) has just split up with her girlfriend and moved out of their home. She sees the beautiful Jasmine (Natalie Krill) while working on a roof, and then decides to pursue her when they meet in a lesbian bar. However, Jasmine says she’s not a lesbian, she’s only in the bar because her friend dragged her. Jasmine is engaged to a man and known for being faithful.

However, after Dallas kisses her, it starts a flirtation that leads into an incredibly intense, passionate affair. While Dallas has previously found it difficult to fall as deeply for her lovers as they fall for her, with Jasmine it’s different. Jasmine meanwhile finds desires and passions that she’s repressed awakening in her. While she can finally express them while her fiancé is away on business, she knows everything will change when he returns.

If you were expecting an all-female crew to bring a radically different perspective to a passionate, erotically charged look at lesbian love, you may be surprised to find Below Her Mouth isn’t too different in tone or story to other similar movies. Admittedly, there’s little sense of this being set up largely for male viewers to get vicarious thrills from viewing girl-on-girl action, and the movie is genuinely interested in who these women are as people, but equally I can’t say it felt like we were getting a particularly new viewpoint.

That’s not to say it’s a fault with the film that it doesn’t offer that, indeed it’s quite interesting that it doesn’t. It did get me wondering something though. This is a film filled with hot, steamy, passionate and quite explicit sex scenes. While these aren’t designed solely to titillate men, straight guys are likely to get off on viewing them. So is it a problem that despite the intentions, some straight men will objectify these women in rather sexist ways, or is that an inevitable side-effect of creating something that is erotic for, and speaks to the needs of, women?

There is a hint of contrivance to the story, although I did wonder if that was deliberate. A lot of lesbian porn (not made for women), centres around the idea of a woman who’s never done that kind of thing before suddenly getting down with another woman. It’s the same basic plot here, but far more invested in the people, where the sex isn’t solely about the mechanics, it’s about expressing the passion of what’s going on in their minds. Likewise, Dallas is not a lipstick lesbian, she is quite butch and what she says suggests she’s somewhere along the genderqueer spectrum. The movie doesn’t go too far into this, although Dallas is undoubtedly a woman who takes on roles that are traditionally male – not least that she owns a roofing company, and likes to be the penetrative partner in sex.

It does have some flaws though, as there is a sense on occasions of the film dipping towards filmic fantasy and moments of romantic cliché. This would be more of a problem if it weren’t for the terrific performance of Erika Linder as Dallas. She has a tough job, as particularly in the early stages Dallas doesn’t seem like the nicest of people. Indeed, when she initially pursues Jasmine, there’s a jock-ish sense of cocky selfishness, a rather masculine feeling of her assuming she’s god’s gift and not caring about the consequences for those around her. It’s something that could have easily made her seem unpleasant and irredeemable, but Linder brings a sense of both charm and complexity to Dallas, which means that as we learn more about her and her assumptions are challenged, the audience hasn’t given up on her and is prepared to go on that journey.

Jasmine is also an interesting character, even if is she does spend most of the movie cheating on her boyfriend. To get around this, Below Her Mouth does somewhat indulge in the LGBT-movie conceit of seeming to think same-sex cheating isn’t proper cheating, and that the opposite sex partner is almost mean for caring about someone whose true identity wants something different. At least it makes a change from the stream of gay male movies where a shrewish woman is shown as vaguely villainous for being peeved her husband has been seeing another man.

Although it does have a few issues, Below Her Mouth certainly has enough to keep a viewer intrigued. It invests deeply in building the romance and connection between the women, so that you care about what will happen to them, ensuring that the audience stays with them and their journey.

Overall Verdict: There’s intrigue in both the similarities and differences to how this might have played out if filtered through a male gaze, but underneath that there’s a slightly flawed but involving lesbian romantic drama.