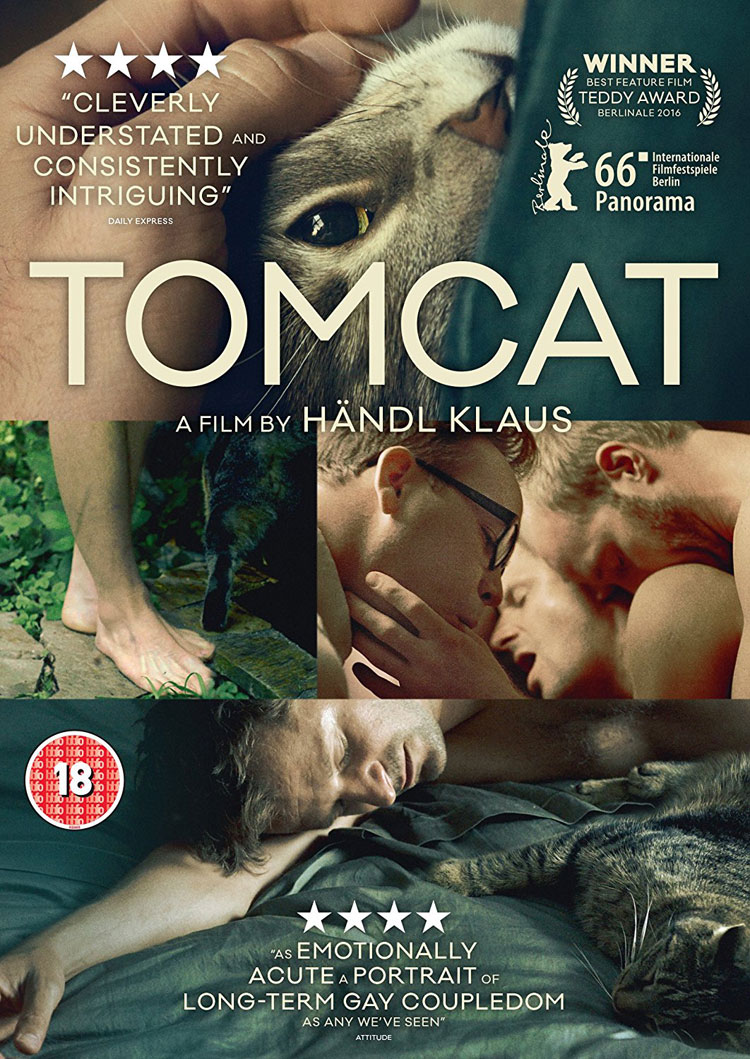 Tomcat is a bit of a tough movie to review. Much of the film pivots around a single, shocking moment, which takes place around a third of the way into the film. However, revealing too much about it would take us into spoiler territory, and it’s the sort of thing the needs to come as a surprise – although the amount of foreshadowing may give you a clue something ominous is gonna happen. That said, there are some who’ll be genuinely shocked and probably won’t be able to get past that moment.

Andreas (Philipp Hochmair) and Stefan (Lukas Turtur) are a seemingly happy gay couple, with fulfilling careers and plenty of loving friends. They live in a beautiful house with their cat, Moses. Their lives are full of music, sex, socialising and a sense of connection with both each other and those around them.

Then suddenly and completely unexpectedly Stefan does something inexplicable, violent and totally out of character. Andreas is beside himself, unable to comprehend exactly what has just occurred, and it soon becomes apparent that it is not something they can easily work their way through and put behind them. As time goes by, Stefan struggles to allow Andreas back in, while Andreas tries to understand why he did what he did and also to bring Stefan back to him. As they fight to find a way to get over what has happened, Andreas has a terrible accident, but even that may not be enough to redress the balance.

Perhaps most frustrating is that in its desire not to follow conventional melodramatic film tropes, after the ‘event’ it consciously avoids having the characters react in the way you’d expect. That means it also avoids a lot of things that would be logical to happen, not least a few conversations about what took place and why. Stefan may insist Andreas goes to see a shrink, but there’s too little context, to the point the movie verges towards seeming almost obtuse in this regard, and frustrating for the audience when yet another scene comes along where neither character asks the simplest question that would seem necessary in that situation.

Director Klaus Händl has insisted that Andreas does what he does on purpose, but the film itself leaves that open, only properly addressing it in a single scene later on that isn’t quite as clever as it thinks, and actually isn’t that convincing (it has the whiff of a director thinking they’re making a statement about the vagaries of human nature, rather than being true to the character). Thankfully, that openness allows the audience space to consider what they’ve seen – was it almost an accident? An impulse Andreas couldn’t control? Is it something he wanted to do all along but kept it inside? All these hang over the second half of the movie, adding a sense of both dread and intrigue.

The film is undoubtedly thematically interesting, considering things such as the communication between couples and how they face adversity, whether there are some things that are unforgivable, and also whether we should treat what occurs as much as a metaphor for an unspoken problem at the core of Andreas and Stefan’s relationship and what holds is together, as it about the violence itself. T

What helps hold it all together is a real empathy for the characters, both of whom are flawed in different ways (interestingly, by the end of the movie, some viewers have come out on Andreas’ side, despite his shocking act, feeling Stefan was almost torturing him in a way that goes beyond what was deserved). Through the lengthy opening scenes we’re brought into the cost domesticity of their world, which is presented as the sort of thing many gay men aspire to. The film starts off sweet and sexy – including a couple of pretty full-on sex scenes, complete with both guys dancers with boners on display – to ensure you have empathy. While it then takes a very different tone, it’s more than tight enough to keep you hooked in and hoping that they can somehow find a way through.

It is frustrating that in its avoidance of cliché it misses out a few things that you’d think would be vital both for the viewers’ and the main characters’ themselves to the point where its seems to be obstinately defy logic, but it’s still and interesting and powerful movie. Some will undoubtedly find it a tough watch, but it’s worth sticking with.

Overall Verdict: On the one hand pretentious and too pleased with itself, and on the other powerful and intriguing, Tomcat may have its frustrations but it’s undoubtedly a powerful experience.