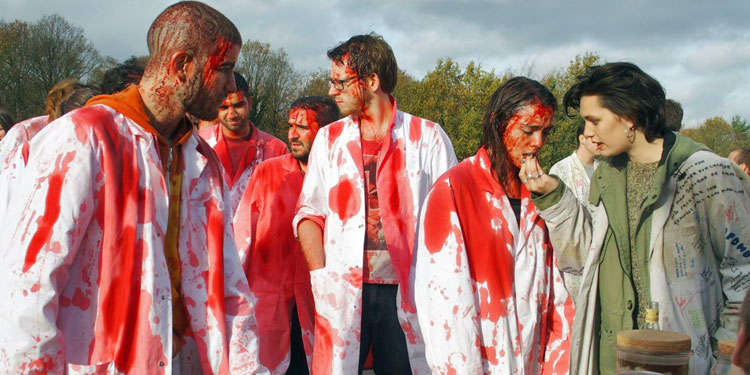 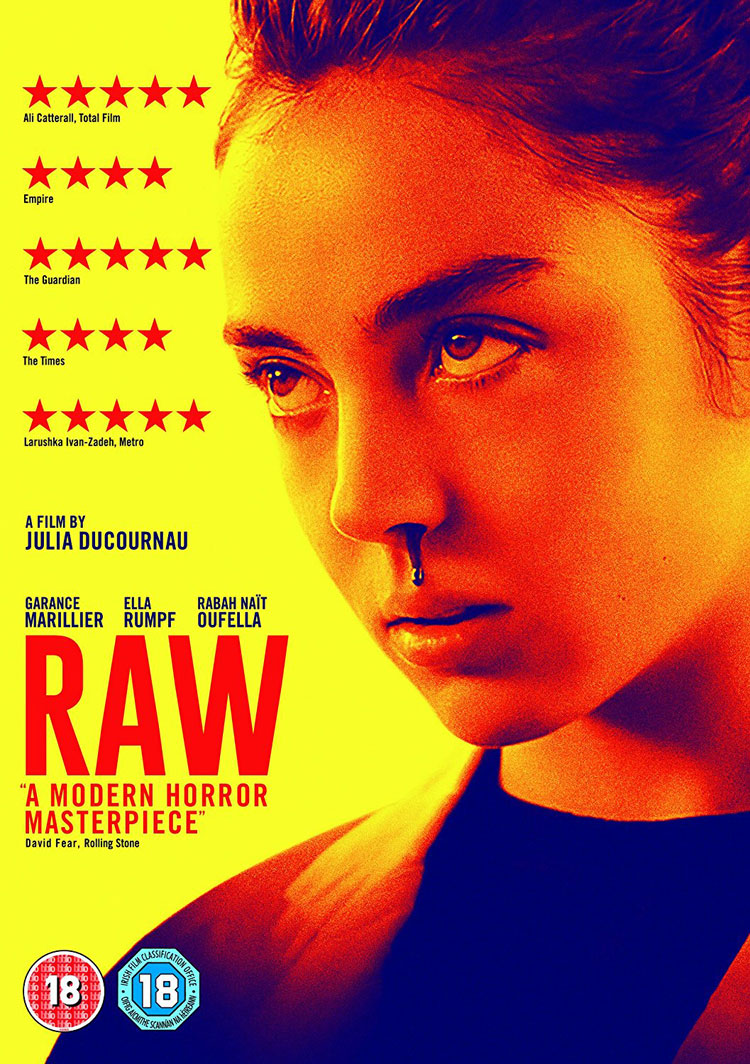 On its festival debut the Belgian movie was met with a lot off buzz, as well as talk of people walking out and fainting because of its intensity and levels of gore. It now has a 90% Fresh rating on Rotten Tomatoes, which is pretty remarkable for a ‘horror’ movie, but I’m not completely sure whether it deserves it or not.

Justine (Garance Marillier) comes from a family of strict vegetarians, and seems to have lived a strict, rather buttoned-down life. She heads off to her first year at veterinary school – a place her older sister Alexia (Ella Rumpf) is already attending. Justine soon discovers this is a very different world from the one she comes from, and that includes some rather extreme hazing rituals.

One of those rituals involved dousing the freshmen in buckets of blood and getting them to eat raw meat. This seems to awaken something in Justine – a need to devour raw fresh. As she experiences more of the freedoms, fears, alienation, cruelty, camaraderie and growing sexual desire of college life, her urges increasingly move towards cannibalism. Her gay roommate Adrien (Rabah Nait Oufella) initially looks like he might be an unexpected stabilising force, until Justine starts having ravenous feelings for him too.

I have to presume the fainting and walkouts were either PR, or because this isn’t the typical sort of movie for the film festival crowd. It has the DNA of both a rather high-minded, arthouse coming-of-age movie, and of a slightly grand guignol horror movie. Those solely expecting the former may have been shocked by the latter.

It ensures that no matter what’s going on, it feels like there’s intelligence at work here – a look at emerging female sexuality, dysfunctional families, the eruption of desire, society descended into a Lord Of The Flies insanity, and perhaps most pertinently that no matter how much you try and hide and ignore what’s inside a person, attempting to repress it isn’t going to stop it emerging. But what it has to say about these things is more difficult to say. Indeed, it’s noticeable looking at the cinema reviews that people have come away thinking it was addressing almost contradictory things.

That’s not least whether it’s equating Justine’s burgeoning cannibalistic desires with her sexual ones, and whether doing so is problematic or not. In fact, I cannot help but wonder whether, if Raw had been written and directed by a man (instead of debut filmmaker Julia Ducournau), people would have seen it as a misogynistic attack on female sexuality. You could easily read Raw as saying that sexual desire in women is dangerous and once ‘unleashed’ becomes a problem that no one has found a solution to. That’s not the point, but you could easily take it that way.

As a result, I have a sneaking suspicion that Raw’s continental, slightly arthouse nature is hiding that it’s not actually that smart, and perhaps isn’t even meant to be.

Another theme that comes up in multiple reviews is Raw’s ‘sense of humour’ about itself, even if no seems able to quite pinpoint what that sense of humour is. I can understand where those reviewers were coming from, as quite often you end up smiling, but that’s largely because of how ridiculous the movie is at times. Some may take it as deliberate irony and smile at its knowingness, while others will just laugh at something that they feel is taking itself way too seriously for something so silly.

However, it’s the intensity of Raw that many people seem to have responded to, so that even though objectively it’s not as gory and blood-soaked as its reputation might suggest (and certainly less so than a lot of slasher flicks), people have felt dragged into its nightmare. What helps on this score is Garance Marillier as Justine, who plays the whole thing completely straight, treating it like a serious drama. She starts out young, naïve and virginal, before becoming increasing libidinous and cannibalistic as the movie goes on. Marillier is very good, as is Ella Rumpf as he duplicitous sister, Alexia.

Although I did tend to feel like I was on the outside looking in, I can understand why those who were pulled so fully into Justine’s world might have reacted more viscerally to it.

Purchase from
Amazon.co.uk
There’s a lot of potential for Justine’s gay roommate too as part of the mix, but ultimately – and despite a couple of scenes that try to suggest otherwise – his inclusion comes across as oddly tokenistic. Whether deliberately or not, he’s rather treated like the disposable female love interest in a lot of more typical movies, at least in terms of the fact he existence is solely about furthering the straight character’s journey. I’m not sure whether that’s progress for LGBT characters or not.

Overall Verdict: As you might have guessed, it’s difficult for me to come to a conclusion about Raw. Perhaps I just missed something, but for me it was a somewhat intense – and admittedly very interesting – horror movie, which kept hinting at intelligence rather than demonstrating it, and couldn’t quite hide that some of it verges on the farcical.