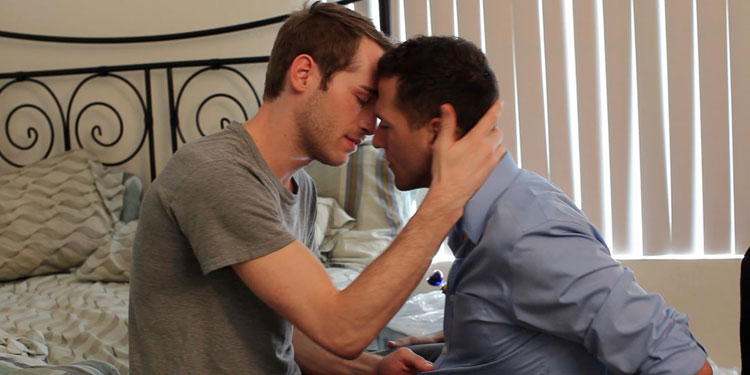 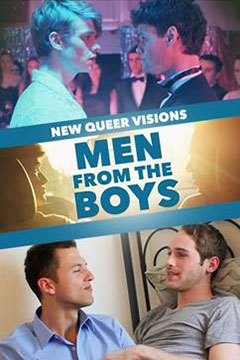 For several years New Queer Visions has been presenting programmes of LGBT short films at various film festivals. Now some of the shorts that have been screened by NVQ have been brought together into a package available for us all to watch via Filmdoo (worldwide) and Amazon (in both the UK and US).

While a previous New Queer Visions collection we covered concentrated on female-led films, this one is all about the boys. They range from how sexuality touches race and ethnicity to dating someone deep in the closet. Take a look at what we thought of the films below.

Cigano (Gypsy)
Dir. David Bonneville (Portugal)
Touching on issues of class and ethnicity, Cigano follows wealthy young man, Sebastian, who accepts help from a Gypsy, Zé-Tó, when he gets a flat tire. Sebastian isn’t sure how to relate to his new companion, initially assuming Zé-Tó is just helping him to get cash. However, what he’d really prefer is a ride home. As they drive, they begin to find they have more in common than they expected, although Sebastian still finds it difficult to trust his new ‘friend’. Cigano is a bit of a slow burner, managing to build tension between its seemingly mismatched leads, both due to the race/class assumptions each makes about the other, and then a growing, but subtle, sexual tension. Compared to the other films, the gay content here is relatively understated, but it’s still an intriguing and well-made short.
3 out of 5

Talking To My Mother
Dir. Leon Le (USA)
The first of two films from Leon Le, who was born in Vietnam but came to the US as a teenager. It’s not too much of a surprise that Talking To My Mother is interested in culture clash and identity, following Asian American Michael, as he tries to discuss his life with his Chinese mother. However, he feels that her expectations and background will make it difficult for her to understand him, especially as he is gay but feeling pressure to meet familial expectations and marry a woman. Nicely put together, Talking To My Mother’s only flaw is that when placed within a gay short film programme its twists become a little obvious. Even so, it’s still a stylish and melancholy look at the pressures some people still feel surrounding their sexuality, while also knowing that sometimes if you hide things, it will eventually be too late to do anything about it. The ending is nicely done too.
3.5 out of 5

Dawn
Dir. Leon Le (USA)
The second of Leon Le’s film is about African American New Yorker, Tye, who is heading home one evening when he spots an Asian American man looking at him. Tye thinks there’s racism in the man’s stare, and so decides to follow him, which leads to a robbery. Both men make assumptions about the other based on their race, and both may be wrong. This is the sort of challenging cross-cultural short that gets your brain working while it plays with how racism can work in different directions and the danger of assuming that all people are the same based on generalisations. It’s not always a comfortable watch, especially as it seems to deliberately bait the audience into wondering if the film is making its own racist assumptions, but its certainly interesting. While there is gay content, it’s comparatively minor.
3 out of 5

Spilt Milk
Dir. James Dunstan (UK)
I don’t know when proms got the UK, but they’re certainly here. This rather sweet and well-constructed short follows British teen Scarlett and her male best friend Frankie. The prom is coming up, and as they prepare for it, the two friend face issues of gender, sexuality and unrequited love. Can either of them get what they really want when Scarlett is in love with Frankie, and Frankie wants to be genderqueer and date guys? With a neat little Sliding Doors-type sequence, it’s an unconventional love story of people exploring and challenging identity and expectations. In many ways it’s the sort of film we need more of, which responds to the modern world and the fact that while young people can express themselves in ways it would have been difficult to before, that comes with its own set of complex challenges.
4 out of 5

Dinner Confessions
Dir. Chih-Jen Lin (Taiwan)
We return to Asian mothers and their sons in this Taiwanese short. Teenage Che is having dinner with his mom when their chitchat turns to a magazine she discovered while tidying his room. She assumes the fitness mag full of flesh-displaying men must be an embarrassing present he was planning to give to her, but of course there may be other reasons Che has it. Then Che’s ‘close friend’ Chun-Hao shows up! Although Che’s mother seems ridiculously dim not to realise what Che’s muscle mag may mean, that’s probably due to viewing it through gay eyes and not in terms of the fact ‘gay’ is the last thought of many straight people (it sometimes stuns me how blind people can be to everything LGBT). Apart from that it’s a nicely naturalistic short (the whole thing was improvised), which may not cover much new ground but tells its coming out story well, with an interesting undercurrent concerning the amount of control people have over their own lives.
3 out of 5

Pittsburgh
Dir. Rory Dering (USA)
Brett is a young, deaf man, in a relationship with the hearing Alex. The two have been fighting, but Brett has gone over to Alex’s apartment in the hope of making up. However, they can’t ignore the fact that after two years, the confident and out Brett wants more, but Alex is still in the closet, afraid of everything and most particularly terrified of himself. Their problem isn’t love, but Alex is so filled with confusion and self-loathing, he may be willing to throw their relationship away rather than confront his issues. On the surface Pittsburgh doesn’t seem to add up to an awful lot, but there’s more going on under the surface than it first appears, not least how it plays with expectations, such as that while we might expect their communication issues to concern one of them being deaf, it’s actually the massive, self-created issues around Alex’s attitude to his sexuality that he seems incapable of addressing. Sweet and sad, but be prepared for the fact the fast & furious signing means you need to read the subtitles pretty quickly.
4 out of 5

Kiss Me Softly
Dir. Anthony Schatteman (Belgium)
17-year-old Jasper has had to get used to the fact his father is rather self-involved and likes to be the centre of attention, even if that leaves him bored and on the sidelines. He’s also being bullied by some of the other kids at his school. Then, when his friend kisses him, Jasper decides it’s time to start taking charge of his existence, which he hopes will encourage his father to make some changes too. A well-made and nicely told short film, Kiss Me Softly has enough going on that it would be interesting to see it expanded out into a feature-length movie. In fact that’s the only complaint, as while it sets up an interesting situation and characters, it doesn’t really have the time to play out the issues it raises. The ending of the film is almost what should be the beginning, which is fascinating and frustrating in equal measure.
3.5 out of 5

Overall Verdict: A good selection of short films looking at a range of LGBT and LGBT-related issues. Although sometimes a little too eclectic for its own good, all the shorts are worth a watch.