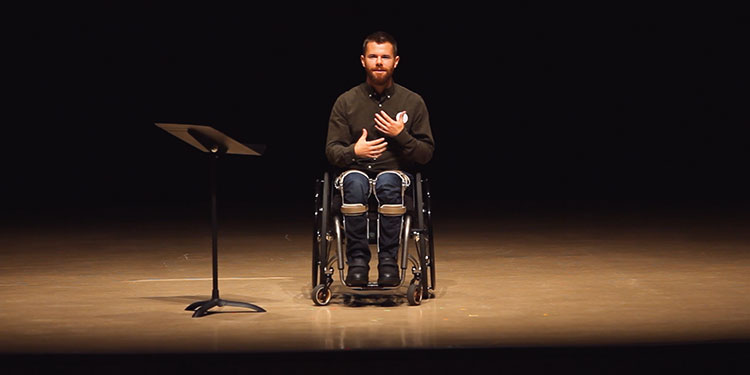 This documentary follows Scott Jones, who was stabbed in the street after leaving a bar in Nova Scotia. The homophobic attack left Scott paralysed and using a wheelchair. Now trying to piece his life back together – partly through music, leading choirs and speaking publicly about his experiences – he tries to deal with the impact of the attack. Scott attempts to find some form of catharsis, whether that’s making a kind of peace with his attacker or processing the changes to his life.

Love, Scott is a moving and sometimes haunting film, helped by having an eloquent and thoughtful subject at its core. Scott is a man who’s been thrown one hell of a curveball but wants what’s happened to him to have some sort of meaning. There are times when the film’s director (& Scott’s friend), Laura Marie Wayne, seems to be pushing things in ways that could verge towards the exploitative or result in the audience pitying Scott, but he always manages to pull it back. His artistic mentality ensures the film becomes as much a meditation as a look at one particular story.

Due to the way he looks at life, it becomes natural for Scott and those around his to try to unpick the meaning of everything and to try to understand on a level that goes far beyond the purely physical. This allows the documentary to look at and talk about ideas that would feel forced in most circumstances, but becomes natural here because of who Scott is. That ensures the documentary can take things to places it would be difficult to access otherwise.

Well put together and with a thoughtful, broad perspective on its subject – from the pain caused by the legal system not acknowledging the homophobic aspects of the crime, to an appreciation of the constant life adjustments Scott is still going through – it’s a fascinating watch. With a couple of extremely effective emotional crescendos and a contemplative understanding that the mental is often more profound than the physical, it’s a sensitive and moving film and one well worth watching.

Overall Verdict: An emotionally engaging look at the ramifications of a homophobic attack on one young man. It’s a moving documentary that will linger in the viewers’ mind.