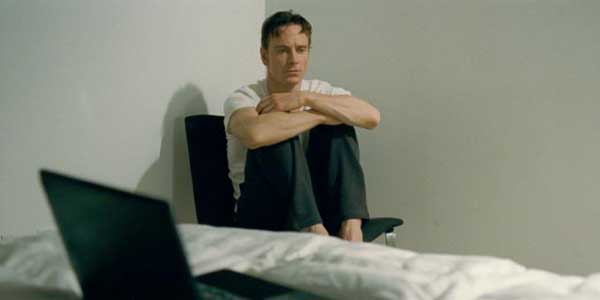 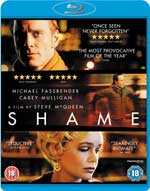 A man is on a subway train and notices a beautiful woman sitting opposite. Their eyes meet, and each smiles at the other. When the train gets to her stop, she stands up. The man stands too, coming up behind her where their hands brush and a jolt of electricity passes between them. He follows her off the train but in the jumble of people loses her. In most films this would be the start of a great love story – two lost souls destined to find each other again. However even in the first few minutes it’s clear Shame will not be that kind of story, signalling right at the beginning that the Hollywood idea of sex and romance isn’t real.

Michael Fassbender is Brandon, who’s living in New York, has a good job, nice apartment and on the outside seems to be living the high life. However it soon becomes clear he’s reaching a point of desperation, using sex as a way to feel alive – even if only briefly – but which merely ends up highlighting the emptiness of his life and prevents him from finding anything real to connect to.

After trying to ignore his sister’s incessant phone calls, Sissy (Carey Mulligan) turns up on his doorstep needing somewhere to live. Her presence begins to bring Brandon’s life into focus, and as he sees himself reflected in the damage that’s etched onto her face, as well as comparing her almost despairing need for love and validation with his succession of meaningless sexual encounters, his existence begins to fragment. When she sleeps with his boss, blurring the lines of the worlds that he’s just about managed to keep separate from each other, his life plunges downward, with the main question being whether he or Sissy hits rock bottom first.

As you can tell from that synopsis, this is not a film full of rainbows and puppy dogs. It is bleak, spare and often rather dark, with moments of painful humanity contrasting sharply with the rawness on display elsewhere.

Fassbender and Mulligan really give themselves to their performance. Indeed while a lot of fuss has been made about Fassbender getting his cock out, it’s not really on display much more than quite a lot of others actors have let it all hang out in the past (indeed, Ewan McGregor’s made a career out of it), but it seems like it because of the performance. The exposure is Fassbender not holding anything back in portraying the damaged soul of Brandon, rather than in the presence of his penis.

It’s certainly not a film that offers easy answers though. It’s filled with long shots where the camera stays trained on the characters longer than is comfortable, where the audience is asked to fill in the gaps. There’s no point where Brandon or Sissy spill out every issue they’re dealing with and how they got to be such damaged people. There are hints that there were major problems in their childhood, but Shame isn’t interested in the easy answer of blaming their problems on that, instead looking at the anger and never ending search for a feeling of stability and happiness they’re both trapped in now.

Some will undoubtedly find Shame dull and too bleak for its own good, but give it a chance and it works under your skin as you begin to feel Brandon’s sorrow, who is his own worst enemy and can’t find a way to make life tolerable except to medicate himself with no strings attached sex.

The fact the film doesn’t hold the audience’s hand does make a scene towards the end potentially awkward. At one point Brandon’s desperate need for sex leads him to the backrooms of a gay club, where he knows he can find a meaningless blow job. You could see this as saying having gay sex is some sort of low point – oh my god, he’s so desperate he’d even sleep with a man! And while there’s some truth in that, it’s more about how sex for him has become so detached that the release is more important than where he gets it, rather than suggesting going gay intrinsically means you’ve reached the nadir of existence. Some critics have taken issue with the scene and indeed on its own it would be problematic, but taken within the scheme of the film it kinda makes sense.

The picture quality on the Blu-ray is good, which is more important than you might expect for a character drama. The high contrast, desaturated world the film presents is rendered perfectly, allowing you to fully experience the cleverly designed shot composition and editing. It also highlights director Steve McQueen’s vision of New York as a virtually empty wasteland, offering small hubs of connection, and where the starker the light shone on something the less visible it is. Indeed with Brandon’s nudity, it’s noticeable that while removing his clothes for strangers isn’t a problem, he keeps some clothes on if the sex might actually mean something.

The Blu-ray includes a half-hour Q&A with Michael Fassbender shot at a screening earlier this year (and which you can watch here, to give you a taste), as well as short, interesting interviews with Fassbender and Mulligan.

Overall Verdict: Not a fun watch, but Shame is a deep, extremely well made character study of sexual addiction, with superb direction from Steve McQueen and absolutely raw performances from Fassbender & Mulligan, all held together by Abi Morgan’s insightful script.