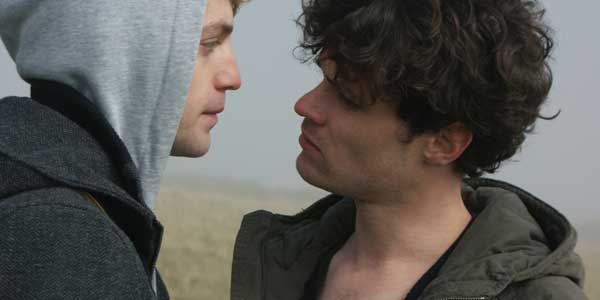 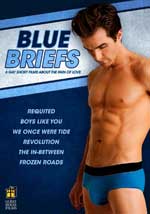 While we’ve mainly concentrated on the UK releases of gay interest entertainment, now we’ve got one from the US. Following on from last year’s release of Black Briefs comes Blue Briefs, a selection of six award-winning, gay-themed short films, ranging from looks at unrequited love to dealing with being gay in a restrictive environment. It’s a great selection. Let’s take a look at the shorts:

Requited (20 mins)
Director: Sal Bardo
Any film that starts out with two hot guys lying in bed wearing just their underwear has to be worth a look! Requited opens with Nicolas in bed with a guy, seemingly trying to ward off any type of real commitment. He’s busy thinking about going to the wedding of his best friend from high school, something complicated by the fact he still in love with his old pal and can’t let it go. Most people will know the pain of unrequited love and how powerful it can be, largely because it happens in your own head, without the complication of another real person being involved. Requited is a well-made, well-written look at the difficulties of getting over something you’ve never had. With some smart observations and a good cast, it’s a great little short.
8 out of 10

Boys Like You (12 mins)
Director: Daniel Armando
Another short about the complications of modern life and relationships – especially when the boundaries between straight and gay, friendship and sex, begin to blur. Sal and Jimmy are roommates and friends. Sal is aware that the boundaries are beginning to blur when he asks to take pictures of Jimmy, resulting in a slightly confusing flirtation. However things go to a whole new level when Sal gets intimate with Jimmy and his female date. Is Jimmy gay? Does he just like Sal’s attentions? Is he abusing their friendship by playing with Sal’s emotions? Is Sal making something simple more confusing that it is? The film poses questions many gay men have had to deal with due toguys who like to blur the edges for various reasons. It doesn’t offer too many answers, but it has fun exploring its ideas.
7 out of 10

We Were Once Tide (18 mins)
Director: Jason Bradbury
Note: This review first appeared as part of our coverage of Boys On Film 8: Cruel Britannia
Anthony lives on the Isle Of Wight with his terminally-ill mum. The main bright spot of his life is his boyfriend, Kyle. Over the course of 12 hours or so, tensions rise and fall as they try to define their relationship and negotiate the issues surrounding Anthony’s mother. But while Anthony begins to see hope, bad news is just around the corner. A film about what people don’t say or can’t admit, We Were Once Tide has a sad melancholy to it, contrasting the bleakness of the rocky Isle Of Wight shore with the potential intimacy and future of the lovers. The ending is sad but understandable – one of those moments where nothing you can do is fully the right thing, everything is a bit wrong and choices need to be made – even if people can’t voice them.
8 out of 10

Revolution (16 mins)
Director: Abdi Nazemian
Many of the most interesting LGBT short films are the ones looking at the gay experience in particular cultures. Revolution is set in 1989 in LA, following 16-year-old boy Jack, who’s from a family that 10 years before escaped Iran during the 1979 revolution. His parents fire the Filipino maid Jack loves and replace her with Emily (Busy Phillips), who brings her teenage son, Gabe, with her. Romance soon starts to bloom between Jack and Gabe, but when Jack’s parents try to fire Emily, he decides to stage his own revolution. Despite a short running time, Revolution cleverly crams in thoughts on culture clash, homophobia and class, as well as the excitement of teen love. It’s particularly fascinating when it touches on the confusion faced by many who grow up in a country their parents weren’t born in, especially if they’re gay.
8 out of 10

The In-Between (10 mins)
Director: Alain Hain
Alain Hain’s films are kind of fascinating. I reviewed his short Curious Thing when I covered Boys On Film 7, and while The In-Between is similar in conception, it’s different in substance. Like Curious Thing, it’s real audio interviews with gay men, complimented and contrasted to visuals that tell a fictional story of love and relationships. This one concentrates on monogamy and the problems of cheating. Various people talk about being in relationships where they discovered the other person was playing away (or they had cheated themselves), looking at why people overlook it or are oblivious to it, and what the consequences can be.  The visuals tell a similar story, commenting on and challenging the audio with the story of a relationship being town to bits by infidelity. It’s a great idea, and while The In-Between doesn’t work quite as well as Curious Thing, it’s still very involving.
7 out of 10

Frozen Roads (17 mins)
Director: Mark Pariselli
In a remote, wintry Canadian town, three teenage friends – Balthazar and siblings Christian and Lyla – try to confront their escalating feeling for one another, despite having been friends since childhood. Balthazar is finding it increasingly difficult to ignore his feeling for Christian, even while his religious parents try to separate them. But does Christian feel the same way, and if he does, what will Balthazar do? Although it occasionally seems on the edge of being pretentious, Frozen Roads has a nice feel for the ennui, anger and bottled up feelings of teen life, as well the sometimes foolish way young people deal with those emotions. There’s a desperation and confusion in the film that sometimes makes it a slightly uncomfortable experience to watch, but it’ll certainly leave you thinking.
7 out of 10

Overall Verdict: A great selection of shorts without a dud amongst them. Exploring the difficulties of life and gay love, they take on some fascinating subjects in deep and interesting ways.