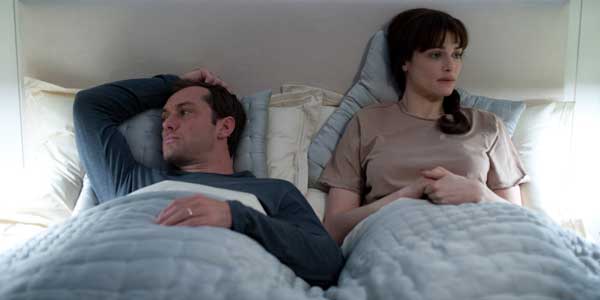 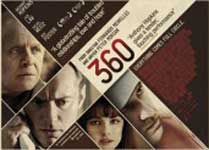 Meirelles showed his skill with complex ensemble tales with City Of God, but 360 is a slower affair, more meditative than the driving energy of his Brazilian favela movie. Amongst the many stories are Jude Law and Rachel Weisz’s married couple, who both find themselves in adulterous situations. Anthony Hopkins is an older man looking for his lost daughter, who makes a random connection with a young Brazilian woman. Ben Foster is fresh out of prison after a six-year stretch for paedophilia, trying to withstand the temptations and distractions of the outside world. There’s also a prostitute sent to an appointment with a brutish Russian businessman, while her sister makes friends with a man outside, whose marriage is on the rocks.

360 is the sort of film some will love and others will loath. If you like films where stories are neatly wrapped up, loose ends are tidied away and motivations are clear and concise, this isn’t the film for you. The movie instead meditates on things, positing possible meanings and thematic ideas without ever leading the audience by the hand. Running through the film are some interesting ideas about sex and love. The opening mini-stories present sex and human connection in essentially economic terms, and it’s through that prism we then view the rest of the movie.

It’s all rather intriguing but with each character given little screen time, none of the stories really go anywhere, leaving everything up to the audience a little too much. The result is that while the film constantly seems to be searching for something profound to say, characters leave just before it actually gets there. The brevity of each story also tends to give the impression that the connections between the characters are a little arbitrary and convenient, simply so that it can move smoothly from one to the next.

A lot of the reviews of 360 have been pretty harsh, but I think the problem is that many people looked at the cast, director and the fact that it has a script by Peter Morgan, and expected it to be something different to what it is. Perhaps with slightly lowered expectations and the realisation that this isn’t just about human connections of all types, but also the connections the audience themselves can make in what’s going on, they’d have realised there’s actually a fair amount to take away from 360. It’s by no means a masterpiece, and sometimes could do with picking up the pace, but it’s still a worthwhile multi-narrative film.

Overall Verdict: An intriguing multi-strand, globe-trotting movie that suffers from the fact each story is so short but still offers some interesting thoughts on sexual politics and the economics of human connections.