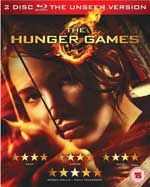 In the early days of DVD, studios went to great trouble putting together really good packages, with feature-length documentaries, plenty of featurettes and various other bits and pieces to please film fans. These releases are becoming increasingly rare, with even major mega-budget blockbusters often getting paltry extras that are only there because they’re expected and give the marketers something to write on the back of the box. It’s nice then that The Hunger Games gets a two-disc Blu-ray release with around three hours of features, including an extremely good 122 minute ‘making of’ documentary.

Not only that but if you go for the HD option, you’re getting the full, uncut version of the movie, which you don’t get on DVD. For the film’s cinema release, the distributors wanted a 12A certificate for the UK, which certainly makes sense for a young adult franchise. However an advisory screening with the BBFC and the eventually submitted version were deemed too strong for young stomachs. As a result various cut and alterations were made, mainly involving the sight of blood, wounds and potentially imitable violent acts, in order to obtain the required 12A rating. While that slightly sanitised version is what you get on DVD, for the Blu-ray they’ve included the full, 15 rated movie.

Do the changes make much difference? To be honest, not massively, but it is one of those cases where the BBFC’s attention to specifics rather than the overall picture may have resulted in cuts that have the opposite effect to what they wished. By removing some of the blood and consequence, it makes kids killing one another more palatable, which is the opposite of what the film is all about, but never mind. Therefore it’s good to get the uncut version, and to be honest, I really don’t think there’s much added back into the movie that would have caused anyone sleepless nights compared to what was in the 12 version.

If you didn’t catch it at the cinema (or haven’t read the book), The Hunger Games is set in the future, where the US has been replaced by Panem, a nation split into 12 districts that are ruled with an iron fist by the Capitol and President Snow (Donald Sutherland). After an uprising decades before, the titular games were inaugurated, which see a young male and female tribute from each district sent to the Capitol to compete in a tournament where they must fight to the death in a huge arena.

Katniss Everdeen (Jennifer Lawrence) is from the very poor and depressed District 12. She volunteers for the Games to save her younger sister from having to go when the child’s name is picked. Katniss heads off to the Capitol alongside 12’s male competitor, Peeta Mellark (Josh Hutcherson). As they’re dragged through training, personal appearances and eventually into the arena, Katniss begins to realise that there’s more needed to survive than being the strongest.

As with Suzanne Collins’ bestselling book, a story about a bunch of kids being forced to kill one another doesn’t sound particularly entertaining, but thanks to the film keeping to the core story and taking the time to add heart, emotion and serious themes to the mix, it works extremely well. Although fans of the book may have a few quibbles with some of the alterations, the movie was inevitably going to be a different beast. The novel is told in the first person and so we know exactly what Katniss is thinking but little else. Of course you can’t do that with a movie and so things have to change. Although fans will miss the cynical, distrustful and often mistaken internal voice of Katniss, getting to see other’s viewpoints does sometimes add something, particularly the view of the Games through the eyes of the Capitol.

Director Gary Ross sometimes make missteps with tone, particularly early on, but largely his decisions pay off, particularly to shoot the movie in a handheld, almost documentary style (although thankfully not with the OTT shaky-cam that’s been popular recently). It’s gives things an immediacy and sense of danger they might otherwise have lacked. Interestingly, despite the verite look, it’s revealed in the ‘making of…’ documentary that the film was planned out pretty much shot for shot long before it was filmed, partly due to the number of effects shots (there are about 1,200 of them) and partly because Ross wanted to ensure every moments counts.

Huge kudos also needs to go to Jennifer Lawrence, who holds the movie together as the tough but vulnerable Katniss, whose mix of resolve and humanity helps ensure the movie never starts to revel in the spectacle of people killing one another. She’s ably assisted by Josh Hutcherson as the charming Peeta and, in a smaller role, Liam Hemsworth as Gale, a character who will become more important in the sequels. Some well-judged casting in the supporting roles helps a lot too, including Donald Sutherland, Elizabeth Banks, Lenny Kravitz, Stanley Tucci, Wes Bentley and most particularly an excellent turn from Woody Harrelson as Katniss and Peeta’s alcoholic mentor, Haymitch. It all adds up to a very entertaining ride that never lags over its 142 minutes, and will keep you on the edge of your seat even if you know what’s going to happen.

The film’s handheld visuals and slightly gritty look mean you don’t get the pin-sharp, over-saturated HD visuals of some major movies – but that’s exactly as it should be. The Blu-ray retains the deliberate slight grain of the film and really shows off the film’s aesthetic, from the almost monochrome appearance of District 12 to the gaudy, Third Reich-ish oppressive feeling of the Capitol and on to the lush greens of the forest arena. It looks good, with the HD picture handling the colour palette well and giving us the images as they were meant to be seen. Likewise the audio is excellent, with a superbly mixed 7.1 DTS HD Master Audio track, as well as a stereo optiong that is apparently for late night listening.

As previously mentioned, the features package is very good. The two-hour making of documentary is extremely well made and holds your attention for its complete running time. It covers pretty much everything from the publication of the book to just after the release of the movie, giving a wonderful insight into the film and why it was made the way it was. It’s refreshingly frank and comprehensive, pointing out many things you probably won’t have noticed when watching the movie, including the sheer number of special effects (although I was wondering why things such as certain props and people wandering along in the background were added in later – surely it couldn’t be cheaper than shooting them on set?).

Alongside this excellent documentary are a number of featurettes, many of which offer more thoughts from the very in-depth and revealing Gary Ross. Add onto that some marketing materials and the complete version of the propaganda film seen in the movie, and you have an excellent selection. It’s one of the few times where I’ve watched every single extra and never felt as if I was only continuing to plod through because I had to write a review.

The overall impression is that The Hunger Games is something everyone involved in it wants to take real care with. That seems to have started the moment Lionsgate snapped up the rights and continued though the making of the movie and onto the cinema and DVD releases. That attitude certainly bodes well for the sequels.

Overall Verdict: With a well thought out, exciting and extremely entertaining movie backed by an excellent set of special features, this is a very good Blu-ray package, which will delight fans and perhaps even convert the sceptical who thought this was just for kids.