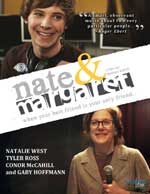 Nate & Margaret could have been a very generic affair, and while it doesn’t exact break new narrative ground, it’s nice that it doesn’t go to the places you’d immediately think it would. Normally a film about a young man and a middle-aged woman would concern itself with asking why such a friendship would develop in the first place, but the film treats it as perfectly natural. Admittedly both are slightly socially awkward, particularly Margaret, whose lack of a husband and/or kids is at least partially the result of a history of abuse.

Instead the movie treats their friendship as something that doesn’t need to be questioned much if it makes them happy, even if other people’s reaction to them is sometimes a slight problem. You might then expect that the movie would be all about the fact Nate is gay, and the older Margaret having a problem with that. But again, the movie doesn’t go down that obvious route. Instead it concentrates on the title characters’ dreams, aspirations and very human emotions, such as Margaret trying to make something of her comedy, despite the difficulties she faces. Although a middle-aged single woman may initially seem the one with problems, ultimately it’s Nate, trying to figure out who he is and getting caught up in the excitement of a first romance, who’s the more insecure (particularly when his boyfriend turns out to be a bit of an ass).

It’s a sweet and rather charming film, and although it has a few issues with character motivation about two-thirds of the way through, its heart pulls it through.

Overall Verdict:  Nate & Margaret is no Harold And Maude, but it’s fun, entertaining and feels fresh, eschewing big, cheap theatrical scenes in favour of concentrating on character and emotion.