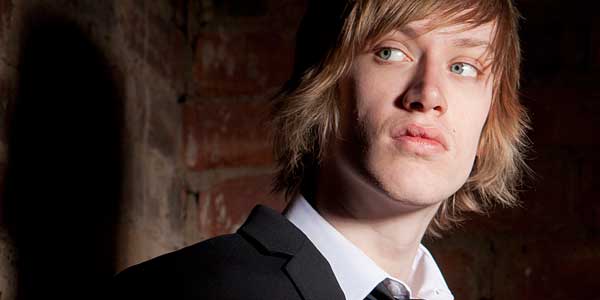 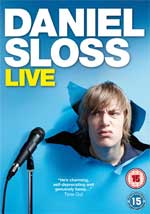 Daniel Sloss makes me feel old, and not just because he’s only 21. It’s due to the fact that I remember thinking the way he did when I was younger – such as the annoyances of younger brothers and dealing with that time when you’re an adult but still finding a new status outside the family home. Over time much of that drifted away so that now watching him is almost an odd sort of nostalgia, as there’s a slight feeling of him tapping into something many of us lose when grown-up life bashes it out of us.

It’s both a boon and a bust for his comedy, as while he can be very funny about being young and dealing with relationships and the world around him, there are times when older cynics will think he’s talking about stuff that may be new to him, but which seem from a time past for them. But then, like I said, he is only 21 and still finding his feet as a comic – as well as as a person – and so it’s little wonder that old farts might tut and feel he’s chatting about stuff that in a few years he won’t think matter anymore (and I couldn’t have made that sound more condescending if I’d tried, but I didn’t mean it that way).

Luckily for him though he’s very funny, with great timing and a lot a jokes that work perfectly. Indeed his natural talent and skill with timing is a massive bonus, as there are quite a few times when if you look at the joke or subject objectively, it’s not really particularly funny or has been dealt with so many times before there’s a sense of him covering old ground. While that would kill the set of most comics, it doesn’t matter too much with Sloss, who manages to make it funny due to excellent timing and a great mix of longer patter with quick asides, ensuring that there’s nearly always something to laugh at. There is a slight over-reliance on double punchlines, where he hits the joke, pauses and then briefly subverts it with something darker (such as repeated references to wanking on his ex-girlfriend while she sleeps). However that’s ultimately just nit-picking about technique, as while it’s something he does over and over, it rarely fails to be funny.

There are a lot of laughs here, from how his mother went from being blessed with the pregnancy of his first siblings to being diagnosed with the fourth, to the difficulty of the first time your family wants to go on holiday without you. The DVD definitely has the sense of a comic who hasn’t reached his peak yet – which is probably a good thing, as it’d be a bit shit to hit your peak at 21 and then have it all downhill from there.

The only extra is a visual commentary, or at least semi-commentary, where we watch Sloss and three of his comedy chums watching the gig and giving their thoughts. While some of it’s very witty, much of it is just three guys pissing about on a sofa in a way that doesn’t really invite us in. Indeed, I presume a lot of it was even weaker, as they only talk about half of the set, with the rest magically removed via editing. It’s worth a look, but don’t expect anything amazing here.

It’ll be interesting to see where Sloss goes from here, as his rather wry yet optimistic style, which has just the slightest hints of surreal zaniness to it, continues to evolve.

It’s a mix of luck and talent that gave him the Michael McIntyre’s Comedy Roadshow slot that’s opened so many doors for him and seen the Scottish comic becoming an increasingly familiar face – and indeed has resulted in him getting a solo DVD at such a young age. It’s something he certainly has the comic chutzpah to take further, as few people could pull off something this funny at his age. I may get the feeling he’ll be even funnier in the future, but that doesn’t mean this disc is a slouch, and I have the feeling that if you’re around his age and not an old fart like me, it’ll speak to you even more.

Overall Verdict: Sloss might be a bit of a work in progress, but he’s one who’s already more than funny enough to deserve a live DVD, which will hopefully just be the first of many.