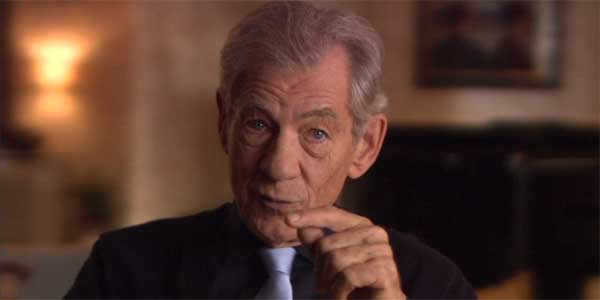 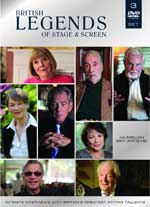 At the end of British Legends Of Stage & Screen I got the distinct impression that you weren’t allowed to be an actor from the 1940s to the 1980s unless Sir Laurence Olivier said so. I’m sure it wasn’t quite as strict as that, but of the eights actors interviewed here, seven have Olivier based stories and six owe a large chunk of their early success to him. The only ones who don’t are Glenda Jackson and Christopher Lee, but even he claims to have snuck onto the set of Hamlet and hung around in the background.

But then, it’s not too surprising Britain’s aging acting greats were spotted by Olivier early on, as he basically had the pick of the crop. So while working with Laurence on screen, at the Chichester Festival Theatre or the newly founded National Theatre certainly gave people a leg up, they wouldn’t have piqued his interest if they weren’t insanely talented in the first place.

British Legends Of Stage & Screen features eight 45-minute episodes where in each one a different actor takes us through their career, from their childhood through how they got into acting, their rise up the career tree and onto where they are now. We get to hear from Sir Derek Jabobi, Sir Michael Gambon, Sir Christopher Lee, Dame Diana Rigg, Glenda Jackson, Claire Bloom, Michael York and Sir Ian McKellen. They’re fascinating people and it’s well worth listening to all of them.

Derek Jacobi talks about the stage fright that kept him out of the theatre for years (stemming from a moment he nearly forgot his lines during Hamlet), Claire Bloom goes into her affair with Richard Burton, Glenda Jackson discusses how she may have worked with Oliver Reed three times but they really didn’t get along and Sir Christopher Lee seems to think he should have been Gandalf rather than Saruman in Lord Of The Rings. It’s fascinating to get all these greats to discuss their careers and what it was like for them to rise through the ranks, as well as their attitude and approach to their profession.

The format lets you get a great feel for each of the actors, as it’s just them talking with occasional voiceover to join the dots. Michael Gambon seems incredibly down to Earth, while Christopher Lee comes across as rather arrogant but convinced he’s the world’s sweetest, most polite man. Then there’s Glenda Jackson, who seems much more jovial than the rather grumpy figure she often comes across as since she’s taken up politics. Indeed it’s particularly interesting with her how you see that it wasn’t just her working class background that caused her to stand as a Labour MP, but also things such as being one of the few Northern, non-posh people at RADA (Royal Academy Of Dramatic Art), and the fact she only got there because of the financial support of her local council.

Ian McKellan is perhaps the most interesting, partly because he’s so jovial and such a great raconteur, and partly because he’s a bit more open about the peculiarities of the profession than the others. When he talks about how so many of the people who helped him in the early days of his career were contacts he got at Cambridge, you can see he’s well aware that there’s something unfair about the old boy’s club, establishment nature of it, even if he can’t deny that it certainly helped him. He also, of course, talks about coming out as gay and why this was so important to him. What makes him so interesting is that his greatest fame didn’t come until after he was openly gay and well into middle-age, which is something that’s exceedingly rare. He takes it all in his stride and seems absolutely thrilled that even in his 70s he can be Gandalf and Magneto.

If you’re at all interested in acting as a profession this is a bit of a must see. It’s likely to make you pine for a long gone theatrical world of repertory, the emergence of the ‘angry young men’ playwrights and the ubiquity of Laurence Olivier. The series is a very simple idea but it’s well done and the people behind the scenes have done a great job getting the actors to talk openly and in depth. It certainly helps that the actors all so well established that there’s pretty much nothing they can say that would hurt their careers, but it does seem to be a format that allows them to feel free to open up (the only one who feels like he’s slightly holding back is Michael York, who also oddly wear sunglasses throughout his episode, even though it was filmed indoors).

By the end I was hoping that this leads to a second series, as while they really have skimmed from the cream for these eight episodes, there are others actors it would be great to hear from in the same way, such as Anthony Hopkins, Julie Christie, John Hurt, Albert Finney, Terence Stamp, Vanessa Redgrave, Julie Andrews, Judi Dench and Maggie Smith.

The three-disc set is a fascinating six hours in the company of some incredibly interesting people, who not only have some wonderful anecdotes about the great and the good, but also offer a wonderful insight into the acting profession through the eyes of some of its most legendary practitioners.

Overall Verdict: A wonderful series that takes you into the lives of eight of our very best actors, allowing us a privileged insight into their careers and the way they view their craft.