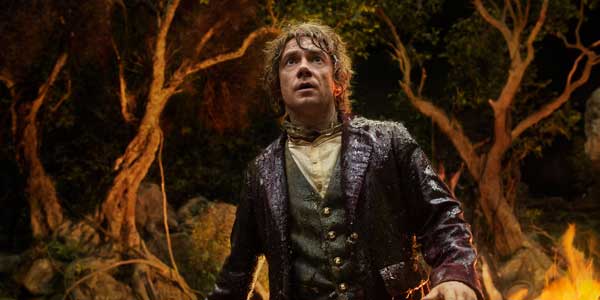 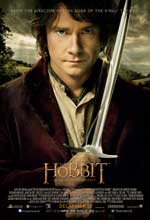 However, while there are definitely a few issues with the movie, for my money this is a largely successful trip back to Middle Earth, although as with Peter Jackson’s earlier fantasy movies, we’re only really going to be able to judge things once the final movie is released (people may have liked Fellowship and Two Towers, but if Return Of The King had been a load of old balls, it would have completely ruined the entire trilogy, as they’re essentially one very, very long film).

The Hobbit kick off with an old Bilbo (Ian Holm) in his Bag End home, writing his memoir of the time her went off on an adventure. This allows for a brief appearance by Elijah Wood as Frodo before we jump back 60 years, when Bilbo looked a lot more like Martin Freeman and is rather surprised when the wizard Gandalf turns up on his doorstep.

Before he knows it, Bilbo’s house is full of rather rowdy, unwelcome dwarves, who invite themselves in even though the Hobbit has no idea why they’re there. It turns out they are about to set off on a quest to the Lonely Mountain, where years before the dragon Smaug drove the dwarves out of their underground city, Erebor, taking all their gold in the process. Gandalf is helping with this quest and has decided Bilbo should be the group’s burglar, even though the hairy footed one has no experience and initially has little desire to go on an adventure.

However they’re soon all off, travelling across Middle Earth and meeting numerous challenges along the way, from murderous goblins and orcs with a grudge against dwarf leader Thorin, to a cave-dwelling, grey-skinned, precious-ring-obsessed creature we’ve all met before.

Those simply expecting more Lord Of The Rings may find the tone of this new adventure takes some getting used to, which like Tolkien’s book is less portentous and grave, and much more of a fairy tale fantasy. Jackson tries to tip us off early on that this will be more straightforward fun, giving us a dwarf song and an almost Snow White-style washing-up sequence. The film doesn’t completely give up on the more serious side though, with dark portents swirling in the background as the film builds the elements of the story that lead into Lord Of The Rings, most of which surround the emergence of something that could be a necromancer.

However much of it is just fantasy fun. It certainly takes a while to get going, largely because Jackson is keen to introduce us to all 13 dwarves in a way that isn’t really necessary. Once the band of adventurer leave The Shire things start to pick up with a series of action set-pieces, plenty of new characters and creatures, as well as welcome reappearances for the likes of Galadriel, Elrond and Saruman.

It’s a lot of fun, and while initially I found Martin Freeman a little annoying as Bilbo – largely because he recycles his tics and mannerisms from various other performances and it feels like they’re slowing things down – by about a third of the way through he begins to settle into the role and by the end I was won over. Of the dwarves, Ken Stott’s Balin and James Nesbitt’s Bofur are the stand-outs, although Jackson hasn’t forgotten how many people swooned over Orlando Bloom’s Legolas, so he provides a couple of totty dwarves in the form of Dean O’Gorman’s Fili and Aidan Turner’s Kili.

However the one actor whose career is likely to get the biggest boost from The Hobbit is Richard Armitage as Thorin. To be honest, for much of the running time the character is a bit of dick, running Bilbo down and saying how he doesn’t deserve to be on the quest. However Armitage does a great job making us believe in this princely warrior and his determination, verging on desperation, to regain the dwarves the kingdom they’ve lost.

The main issue with the film isn’t its length – which is what some people have moaned about – but the fact that it’s very episodic. While Lord Of The Rings also jumped from one thing to the next, the central driving force of the narrative – getting the One Ring to Mordor and defeating Sauron – always made it feel like we were being propelled forward, whereas An Unexpected Journey has a tendency to feel more random, with things happening that have little to do with the central story and occur by chance. If you just let the movie wash over you it’s fine, but if you start thinking about it there’s a lot of stuff that essentially there to fill time (and much of that is Tolkien’s fault, to be honest). There are also an awful lot of deus ex machina moments that get the adventurers into and out of trouble, as well as action-shots that may look cool but stretch credulity that anything could possibly survive them.

It’s all a lot of fun though, and if you can shake off the occasional sense of ‘what was the point of that?’, it’s easy to have a good time. Although the more family film tone is sometimes a little too broad when it delves into comedy – particularly Sylvester McCoy’s gurning wizard, Radagast the Brown – it does ensure it’s entertaining.

No review of The Hobbit: An Unexpected Journey is complete without some discussion of Peter Jackson’s decision to film it at 48 frames per second.  As you probably know, normal movies are filmed and projected at 24 frames per second, which is about as slow as you can go without your eyes noticing it’s essentially lots of still images and hence a flickering effect to occur. However, problems have emerged in the last few years as it’s not really fast enough for 3D, as having two separate image going to each eye causes your brain to have to do far more work and often results in a blurring, jumpy effect when there’s fast camera movement at 24fps.

Filming at 48fps is designed to help iron out the effect, and it’s certainly true it helps in this regard and results in some truly astonishing images with almost preternatural clarity. The potential problem comes with the fact the image is far sharper and more fluid than we’re used to, which gives an uncanny feeling that’s far more jarring that you might expect. Many have compared it to cheap, shot on HD TV movies or the look of hi-def sports broadcasts, and at least initially you can see what they mean.

To get a bit technical, part of the issue is that shooting at 48fps means using a far faster shutter speed and with far more images per second, there’s less motion blur. While that might sound good, motion blur is actually quite helpful in normal 2D movies to trick the eye into believing it’s seeing genuine movement, so if you start to eliminate that, it does produce a picture that initially looks less ‘real’ because it looks too real  – if only because it’s not what we’re used to (that may sound contradictory, but if you watch The Hobbit at 48fps you’ll see what I mean).

As mentioned, it is jarring, producing a dual reaction where you’re somewhat awed by quite how much better the 3D is and how it looks like you could reach into the screen, but also somewhat discomfited by the fact it that doesn’t look right and often tips into the hyper-real. I was left wondering whether it’s an issue with the format as a whole or if it’s just the teething problems of something new. It’s certainly true that while some shots look a bit weird, others look utterly gorgeous, and it would be interesting to know in what order Jackson shot the film.

It’s quite possible it’s the shots from early in the production process that are most jarring, particularly right at the beginning of the movie where some of the bits with Ian Holm are horrible. Peter Jackson has said they were pushing technology so far that the company behind the cameras, Red, was providing software updates sometimes on a daily basis, so it’s more than possible that the tech improved massively as the production went on.

It’s also true that while there are some bits through that don’t quite look right, you do soon adjust, and you can particularly see what the format offers during the big action scenes. It offers a scope and fluidity to the 3D that’s impossible to achieve at 24fps – it looks like a full, complete 3D world, rather than various planes of depth someone has added to a flat image – and as Jackson loves the sort of fast-moving, swooping shots that tend to get lost in the blur of normal 3D, 48fps gives them a gorgeous fluidity and sense of space we’ve rarely seen before in three-dimensional filmmaking. It’s incredible to look at, even if it takes some getting used to.

And while there’s been some talk of the format making people feel nauseous, I can’t see why, unless they find normal 3D nauseating too. Indeed it should be the opposite, because the extra frames and clarity should make it easier for your eyes to process. I certainly found it an easier watch than normal 3D. However, if you don’t want to take the chance with 48fps (or it’s not screening in that format in your area), there are plenty more screens showing the movie at 24fps, both in 3D and 2D.

Sorry to get rather techy there for a while, but it’s not often something comes along in a major movie that makes such a massively noticeable difference to the viewing experience. However outside frame rates, The Hobbit may not be as good as Lord Of The Rings, but it’s a fun adventure. After a slow start things pick up and there’s plenty to hold your attention across its episodic two and a half hours. The film can only be truly judged once we’ve seen The Desolation Of Smaug and There And Back Again, but things get off to a promising start.

Overall Verdict: The tone may be more jolly adventure than Lord Of The Rings, but once it gets going The Hobbit: An Unexpected Journey is a fun ride, with a few truly wonderful action scenes. While I would suggest seeing it at 48fps – even if just to check out this intriguing new tech – be prepared for the fact it’s not quite like anything you’ve seen before and particularly during the opening scenes, the effect is jarring. It does offer some astonishing sights when it fully works though.