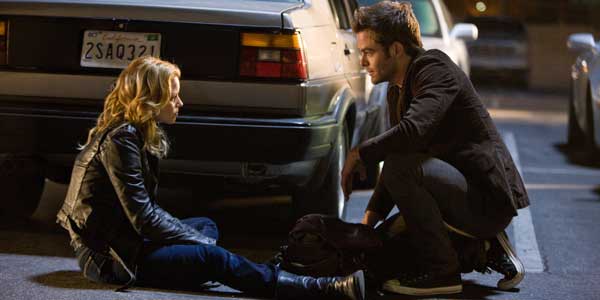 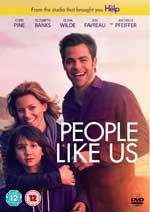 Alex Kurtzman is best known for writing (alongside Roberto Orci) Mission: Impossible III, the Transformers movies, Star Trek and Cowboys & Aliens. You might expect then that for his first directorial outing he’d go for something bombastic and action-packed, but instead he’s dusted off an old screenplay he wrote with Orci and Jody Lambert, which is far more character drama than action spectacular.

Chris Pine plays Sam, who’s just discovered that a business deal has gone hideously wrong when he’s told that his father died. Although he knows he’s expected to go to the funeral, he doesn’t wants to and tries to avoid it, unable to let go of the anger he’s long felt towards his feckless dad, as well as the baggage he’s built up with his mother. Once there he does he duty and plans to leave as soon as possible, but he gets delayed when he’s handed a bag from his father containing $150,000, along with a note asking him to give it to someone he’s never heard of.

He discovers the intended recipient is the son of Frankie (Elizabeth Banks), the half-sister he never knew that he had. Rather than telling her who he is, he anonymously befriends her, getting increasingly involved in her life. He needs the money himself to sort out the professional mess he’s gotten himself into, although it soon becomes clears the struggling Frankie needs it too.

It’s nice to find a film that’s emerged from Hollywood but which was made for grown-ups. Unfortunately though, while its themes are aimed at adults, the script itself delves into plenty of Tinsel Town cliché, so that the audience is nearly always one step ahead of the story and where it’s going. The themes of family dysfunction, an alcoholic mother raising a difficult son and meeting a half-sibling for the first time as an adult are all interesting and the ideas behind them are well thought out in the film. It’s just the story itself, as well as its use of coincidence and timing that feels a tad hackneyed.

There’s also some good acting on display from Michelle Pfeiffer as Sam’s slightly passive-aggressive mother, who’s angry that her son never visited while she was dealing with his dying father. It’s Elizabeth Banks who steals the show though, once more being the best thing in a film she stars in (it’s ridiculous she’s still to reach a-list status), delicately handling the role of Frankie and imbuing her with real verve, dynamism and vulnerability.

Sadly there’s one giant problem with all this, and that’s Chris Pine. It’s not really his fault, it’s more that he’s miscast. You can certainly see why Kurtzman thought he’d be good for the role, as on the surface Pine’s cockiness (some would say obnoxiousness) seems a good fit for the rather arrogant Sam. The problem is that for a large chunk of the movie Sam is a bit of an ass, thinking only of himself and hurting those who love him. It’s a deliberate part of his journey in the movie, but in Pine’s hands I didn’t feel this is a man who’s lost his way and who I hoped would learn the value of family, I just thought he was an disagreeable dick. By the time his character arc started to move it was too late.

Pine’s brand of cocksure, slightly oiled charm can work well, such as in Star Trek and Unstoppable, but here it works against the story, making his character more unlikeable than conflicted, to the point where he just seems rather unpleasant and someone you think Frankie probably doesn’t need in her life. If you can past this, it’s not a bad film, even if the direction is a little heavy-handed and the ending seems conclusive while actually explaining little. It’s an interesting film, even if it’s not a great one.

Kurtzman could well be a director to watch out for though, even if he might be better suited to something a bit more commercial next time.

Overall Verdict: While the characters and ideas are well thought through, a tendency towards cliché and a miscast Chris Pine make it less effective than it would have been. Elizabeth Banks is exceptional though.