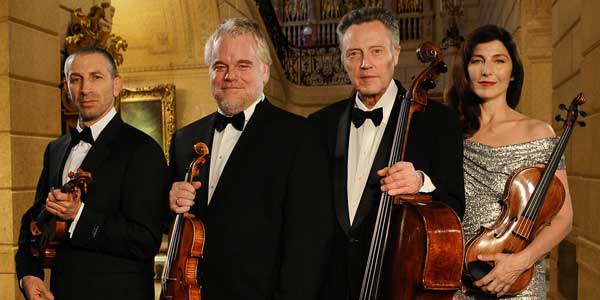 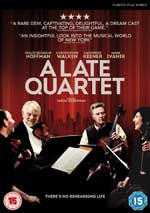 The world famous Fugue Quartet has reformed a year after cellist Peter’s wife passed away. Determined to play Beethoven’s notoriously challenging Opus 131, the aging Peter (Walken) is now facing retirement due to the early onset of Parkinson’s, while second violinist Robert (Hoffman) and his wife, violist Juliette (Keener), have reached a breaking point in their relationship. All the while the cold first violin, Daniel (Ivanir), refuses to accept that the people in his quartet are struggling to survive together. Can the quartet keep it together for one last grand farewell to Peter?

Early on Peter explains the analogy of Beethoven’s Opus 131 to the struggle of life, perhaps intended by the composer who was near to death. As the film progresses, we can see how this plays out: the piece (here, the Fugue Quartet) continues for so long without a break that the instruments go out of tune in their own unique way. As life takes its toll, the four begin to buckle under the pressure it brings. It is, quite simply, exquisite drama.

A Late Quartet serves as an insight into a world many have no clue about: obsession with classical music and a love for instruments to the point of sociopathy. The film, in the most unpatronising way, teaches the audience more about the life and of the composers themselves. Through musical teaching the film gives lessons on life: how passion and idiosyncrasy is something to be treasured and enjoyed, and how mistakes can make life beautiful.

There is a danger that only classical music fans will appreciate much of it, but like Brassed Off and Strictly Ballroom, there is so much more for non-music lovers to relate to. It’s the human touch that we can all feel and ache over. Despite this element, it is still difficult to attach to the urgency and severity of the impact of events on the quartet: their determination to play the opus may seem rather trivial to anyone not as passionate about playing music.

Technically, the film is superb. The shots are gorgeous, effortless cuts let you become so engrossed in the human story, and all to a sumptuous soundtrack that lingers like a dream.  Every piece of music is truly luxurious. The character’s dialogue is so devoid of false emotion, so real and earnest that the characters become endlessly relatable and truly strike a chord with the audience. The ensemble cast is given the opportunity to really strut their stuff, particularly Hoffman, who is completely at home in Robert’s shoes.

This subtlety and respect for the audience lets the acting shine as the cast communicate all you need for the narrative through their expressions – shared looks and even silences. Some audiences may dislike this understated approach, but it is refreshing to see and the viewer can feel rewarded for reading between the lines rather than being smacked in the face with dialogue. There are not enough films that show this level of trust in the audience.

While it is a very serious drama, there is a pleasant cheeky streak running throughout, mostly provided by a charming Imogen Poots. The tragedy stays balanced well with the light-hearted aspects, until the point where all seems lost and hopeless. It is this point that the film really trips: there is a large jump to a moment where we have no idea how things have come to this. With the relationships falling apart to the extent they have, it is cruel to leave so much to guess-work and, while it may be brave, it could be seen as lazily avoiding picking up the pieces the film broke in the first place.

Overall Verdict: Like the piece of music it focuses on, A Late Quartet flows from fun and pleasing to dark and painful before the audience knows what hit it. This unexpected nature and the sublime acting will keep you enraptured. More so the pity that the ending falls so flat.