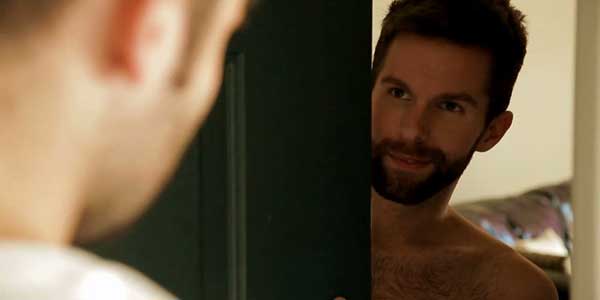 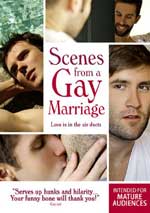 Spending most of his time in his small apartment, he passes the hours listening to the ups and downs of the relationship of his neighbours, whose arguments, conversations and noisy lovemaking comes straight through the air ducts.

Almost in spite of himself Darren starts to make new friends, such as the funny Luce (Thashana McQuiston) and the hunky maintenance man, Joe (Jared Allman). Joe seems to want more than just a friendship, but Darren appears stuck and pushes him away. He’s more interested in whether his upstairs neighbour is having an affair (having heard him lying to his partner about where he’s been). In trying to find out the truth he becomes his neighbour’s stalker, following him around and even breaking into his apartment.

While the film’s title is a play on Ingmar Bergman’s 1973 film Scenes From A Marriage, they’re very different films. Riddlehoover’s movie is a funny yet introspective movie; a character study looking at the modern gay experience, particularly for those who’ve left their mid-20s behind and feel slightly adrift and unsure of their place in the world – desiring connection yet afraid of it at the same time.

Although the film is occasionally a little too wistful for its own good – as well as feeling a tad episodic – it’s held together by Riddlehoover’s strong central performance and the intrigue of what’s happening with the upstairs neighbours (as well as Darren’s rather unhealthy obsession with it). It also helps having Thashana McQuiston around, who’s great in a role that could simply have been the comic relief but ends up adding a welcome dose of grounded reality to Darren’s life. Jared Allman also puts in a sweet, understated performance as Joe, a man who perhaps has more reason than Darren to feel lost and confused, but whose straightforward manner means he knows what he wants.

The film could have perhaps done without its meta-critique of other gay films – portraying them all as shallow and obsessed with sex scenes – as Scenes From A Gay Marriage perhaps isn’t revolutionary enough to pull it off. However it is undoubtedly part of a new move towards films that are about the experience of living a gay life, rather than just the seminal (but increasingly clichéd) moments of coming out or finding first love. It will speak to many whose hopes in their early 20s haven’t quite panned out and who are now looking for meaning in a world where there isn’t much of a template in how to be gay and grown up. For Darren, living vicarious through his neighbours initially seems a more attractive option that fighting for a fulfilling life of his own – and haven’t we all had moments when living life to the full seems like too much effort?

It’s also slightly ironic that while the film tuts at the fact all gay movies must include sex, Scenes From A Gay Marriage fills its cast with ridiculously good looking men (even if they don’t get down and dirty). Darren’s neighbour, played by Carson Nicely, looks like he just fell out of an Abercrombie & Fitch catalogue. There’s pretty much nobody who has a neighbour who looks like that (except whoever actually does live next to Carson).

It’s also noticeable that apart from Nicely, the film has a penchant for the more hirsute gentleman, so if you like a bit of chest hair this is the movie for you. I’m sure Jared Allman and Matt Riddlehoover are gods to lovers of otters (which in case you don’t know is like a gay bear, but slim and hairy rather than burly). And if you don’t believe me about the attractiveness of the guys in this film, just take a look at this post.

Scenes From A Gay Marriage has proved popular enough that a sequel is in the works, which should hopefully be with us in 2015. I’m sure that after watching the first film, many will be keen to see what Darren gets up to next.

Overall Verdict: A funny, entertaining looks at a gay life that’s adrift after the roadmap starts to unravel. It’s a strong new entry in the emerging genre of gay cinema that looks at LGBT life beyond coming out, sex and campery.