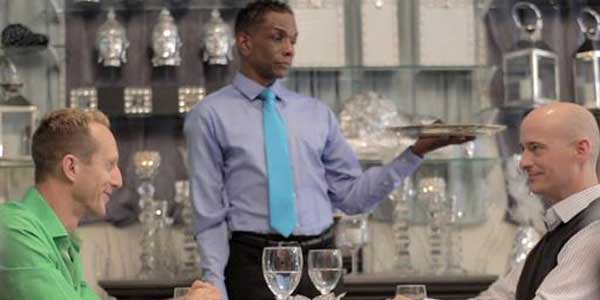 Dirty Talk
Director: Jeff Sumner
This hilarious retelling of the perennial ‘awkward sexual encounter’ is well made, smoothly-played and slickly shot. Conservative, repressed Nathan tells his best friend (and their arch-eyebrowed waiter) about a chance encounter with a fiery Latino man who loves to get chatty in the bedroom.

As with all stories in this particular genre, the story has to come second to the telling – it’s a generic story that we’ve all experienced, but when it’s told as warmly and with as much humour as Dirty Talk, the viewer can’t help but laugh. Cheekily camp with fantastic performances from all cast members, there’s a lot to recommend this particular short. Campy, fun and incredibly sassy, it’s also heart-warming, genuine and honestly funny.
http://www.dirtytalk-themovie.com/

Barry’s Bespoke Bakery
Director: Denis McArdle
The titular bakery is a lavish wonderland of impressive cakes owned by the fastidious Barry, where everything has its place, except for his talented employee Brian.

A love letter to the artistry of making and decorating cakes, this short has tones of The Odd Couple, with interplay between the fussy and the messy, each being the yin to the other’s yang. And, while the narrative is straightforward and the ending quite predictable, it’s a lovely film. It’ll warm your heart and tease your tastebuds in equal measure.
http://barrysfilm.com/

For Dorian
Director: Rodrigo Barriuso
A father fears the sexual awakening of his disabled son, a teenager living with Down syndrome, and struggles with the notion of letting him grow up.

A  gorgeous, subtle and incredibly moving piece of film, For Dorian is an amazing short, played to perfection by the main cast. Between them they manage such subtle and nuanced performances that the viewer can almost become lost in the story. Superbly told with little in the way of expositionary dialogue, this is a story of the unspoken words, the bonds shared between a father and son and the reality of how growing up can challenge that relationship.
https://www.facebook.com/fordorian

The First Date
Director: Janella Lacson
Amanda recalls the embarrassing events surrounding a first date with a beautiful sous-chef named Kelly as she prepares to ask her out on a second date.

What should be a by-the-numbers back-and-forth comic short is given a fantastic level of fresh life and energy by Lacson and her cast. Witty, charming and downright hilarious, this is a perfectly-told story of the awkward first date. The script is sharp, the actors believable and the awkwardness palpable. Even the ‘sassy best friend’ role is played well, never pulling focus or straying into over-the-top, bitchy-one-liner territory.  Brilliantly done.
https://www.facebook.com/pages/The-First-Date/477161175627601

My Mother
Director: Jay Bedwani
Winner – Best UK Short
Jay Bedwani’s award-winning short documents the relationship between Gustavo and his recently-deceased mother, who is the inspiration for his weekend trips to San Francisco, where he lives as his alter ego, Donna.

Heartfelt, and bittersweet, this is a truly honest story of a young boy and his love for his mother. Shot with care and interspersed with photos of mother and son, this is occasionally challenging to watch, but compelling, well-told and very human; the love they shared was very real, and the loss Gustavo feels now that she’s gone is both tangible and harrowing. It’s not difficult to see why this film caught the eye of the judges.