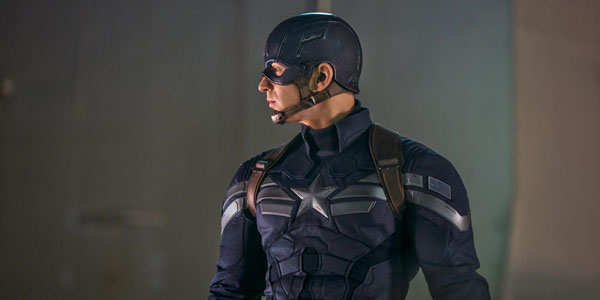 It’s a sign of the times that our superheroes these days are not quite all macho and invincibility, rather plagued with doubts and worries – Batman as Hamlet for example. Captain America seems to be no exception – this actioner has as many scenes with him frowning and worrying over America’s place in the world as zooming around fighting baddies. It’s still not exactly complex – at one point his pal asks, “Which ones are the bad guys” – and he answers, “If they’re shooting at you they’re the bad guys.”

America’s status as the world’s governors of freedom is questioned in a fairly deep way for an action movie here – are they as squeaky clean as they think? Have they done bad things? Yes, in the Second World War they were absolutely pivotal in defeating evil, but since then? Can they be trusted? There’s an interesting tecchie aspect to this too – S.H.I.E.L.D. claim they can stop crime by predicting behaviour, based on DNA, emails, phone calls – spying on people, in other words. Even Captain America smells a rat with that one, but again, it has a kernel of truth in it – Google admits they scan every one of your emails, and the average person appears on camera several times a day.

The film opens with Captain America going in to save a ship which has been kidnapped by pirates, giving an early glimpse of his fighting powers and the help he gets from Black Widow (Scarlett Johansson). We also get the first taste of a running joke where she tries to set him up with a nice girl while the two of them are punching and kicking away – a joke that wears pretty thin. The Winter Soldier is not a film to break the mould of big action sequences followed by cheesy lines, only one of which, delivered by Jackson at the end, is actually funny.

From here it’s a long road to the inevitable huge battle climax, with flashbacks to WWII, where Captain America found himself in a simpler world, and he and Black Widow trying to work out what is going wrong with S.H.I.E.L.D., headed by the smarmy Pierce (Robert Redford). The plus points here are that Chris Evans is both a fine physical specimen and a pretty good actor. He can carry off the vulnerable look as much as anyone, impressive for a man whose biceps are bigger than most people’s thighs. Johansson meanwhile still seems to think wiggling her arse and pouting a lot is the same as acting. She can get away with it in a superhero movie but…

There are also some great cameos, mainly from Jenny Agutter as the posh British representative in S.H.I.E.L.D. and who adds polish to the film’s denouement – she should have been in it longer really. Toby Jones clearly enjoys himself as a cryogenetically frozen Nazi whose body has died but whose brain is kept alive by computers – am I the only one to think of Psychoville here? It’s a reminder that this is after all a superhero movie, not Hamlet. A more effective cameo comes from Stan Lee, of course, playing a security guard looking after Captain America’s old uniform in a military museum – he always raises a cheer.

The main weakness of the film is the theme of a soldier gone bad, the Winter Soldier of the title. Bucky Barnes (Stan) fought alongside Captain during WWII, but has since gone over to the dark side – the Russians, interestingly enough. As a theme it’s weak, and the script doesn’t help much here. His final battle with the Captain, while there are at least two other battles going on at the same time, feels forced and dragged out.

It goes without saying that the summer’s first popcorn movie is too long, baggy and introspective, and the final battle scene is far too indulgent and looks like a computer game. That said, the underlying theme here is pretty interesting, it’s just frustrating it isn’t explored more. The final scene too is far too obviously a trailer for the next instalment, the plot of which seems pretty obvious already.

Overall verdict: Perfectly ok summer popcorn action movie with a fine lead, and some big fight sequences. It could do with trimming, some more attention to the script and some better pacing, but for what it is it’s serviceable.