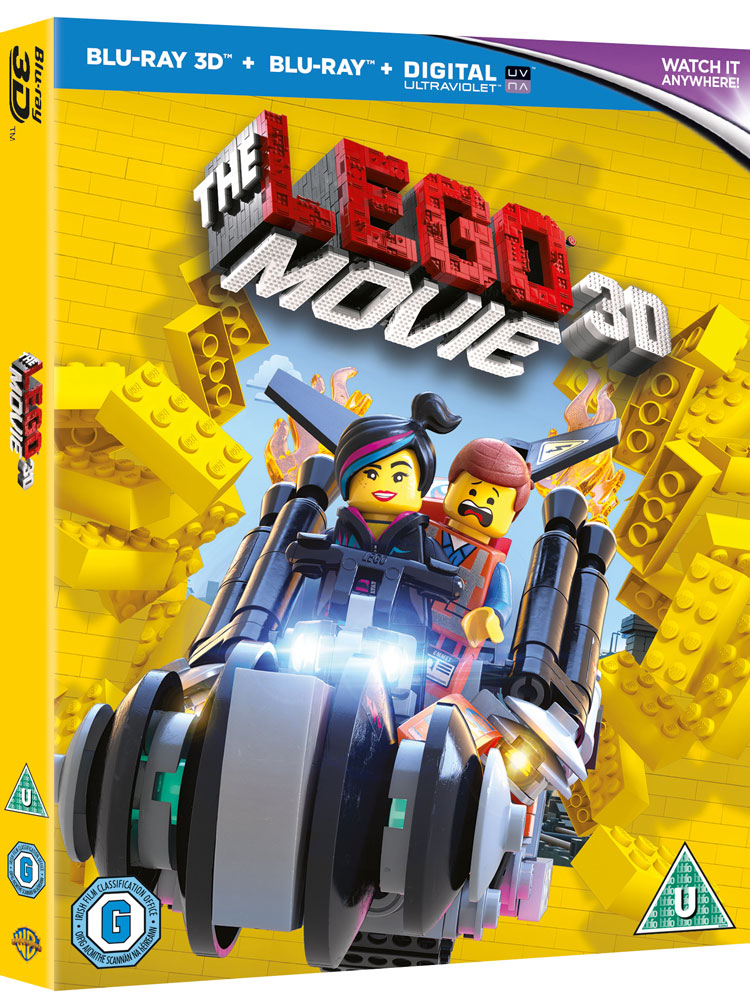 When the movie arrived in cinemas, all those who’d pre-judged it to be a desperate cash-grab had to eat their words, as the movie is very good and very funny, which helped it to a worldwide gross of over $465 million. Now it’s come to home ent. and if you missed it in theatres, you need to check it out now.

The movie’s hero is little Lego man Emmet (Chris Pratt), who’s about as ordinary as it’s possible to be. He works in construction but is a bit useless unless he’s got instructions to follow. Things change drastically for Emmet when he falls down a hole and accidentally discovers ‘The Piece Of Resistance’, an object prophesied to enable the bearer to stop the evil President Business (Will Ferrell) from using the Kraggle to freeze the Lego world and prevent anyone creating anything that isn’t exactly what he sees as being perfect.

Teaming up with Wildstyle (Elizabeth Banks) – who’s initially thrilled to be in the presence of the fabled chosen one – Emmet finds himself thrust into a world of Master Builders, superheroes and types of Lego he never dreamed possible. There’s a big problem though – the prophecy may say that whoever has the Piece Of Resistance can save the world, but Emmet is just an ordinary guy with little that seems special about him.

The Lego computer games, based around the likes of Star Wars and The Hobbit, are noted for their irreverent style and thankfully that’s been brought across to this film. It’s gloriously silly, with its tongue in its cheek and it’s well aware of its own absurdity. The result is that while it can thematically be a little confused – so that it sometimes says one thing and does another – it’s very, very funny, with some great laugh out loud moments.

The script is hilarious, with a sense of humour that’s reminiscent of South Park or Robot Chicken, but cleaned up and made family friendly. However the irony, satire and gleeful embrace of childish silliness is very much intact. It ensures that while it goes to all sorts of weird and wonderful places – including some that might be seen as a little mean in other circumstances – audiences will be swept up in it with a smile on their face, helped along by the heart the movie ensures it injects.

Those weird and wonderful places include a major merging of franchises, so you end up with Batman, Gandalf, Leonardo (the turtle), Lando Calrissian, Superman, Green Lantern, Abraham Lincoln, Shakespeare and Shaquille O’Neal all in one movie, and all in Lego form. As you might expect from all this, some of the jokes will go right over the heads of younger members of the audience, but that fits perfectly with the film’s attitude that we’re all there playing with our Lego blocks, no matter how old we are.

Sometimes it’s tough to tell what the point of having a star voice cast in a children’s animated film is – after all, no kid begged their parents to take them to The Croods because Nicolas Cage voiced Grug – here you can see (or at least hear) exactly why the well-known faces were cast, as they’re pretty much perfect for the roles. Chris Pratt is tremendous as Emmet, bringing just the right level of positivity and heart, mixed with being just a tiny bit dim.

There are also great turns from Elizabeth Banks, Charlie Day, Alison Brie, Will Arnett and Will Ferrell (and plenty of smaller cameos from everyone from Jonah Hill and Channing Tatum to Dave Franco and Cobie Smulders), but for my money the standouts are Morgan Freeman and Liam Neeson. Although neither of them get to do comedy all that much, Freeman is absolutely hilarious as the deadpan blind sage Vitruvius, while Liam Neeson gets to show off both his tough guy persona as Bad Cop and a surprisingly sweet, playful side as Good Cop.

The film looks great on Blu-ray, as you would expect. It really highlights what a great job they did of creating a world that looks like it’s live-action and made of Lego, even though 99% of it was made inside a computer. That said, the crew are keen to point out in the special features that it is ‘real’ in that absolutely everything was created using types of Lego blocks that you can buy in shops, even if they are virtual ones.

Although some of the features are a little random, such as a Lego faux trailer for ‘History Cops’ with Michelangelo and Abraham Lincoln, most of it is interesting and a lot of fun, aided by the fact they keep the tongue-in-cheek wit alive even when going behind-the-scenes. The navigation isn’t the easiest of things to work through, but it’s worth it to find some genuinely interesting and funny ‘making of’ featurettes and great nuggets such as the outtakes.

Just one word of warning – after watching the film you will be singing the annoyingly catchy ‘Everything Is Awesome’ in your head, whether you want to or not.

Overall Verdict: Wonderfully silly, genuinely funny and with plenty of heart, The Lego Movie is a lot of fun for all ages. Hell, I had so much fun I watched it twice, back-to-back.