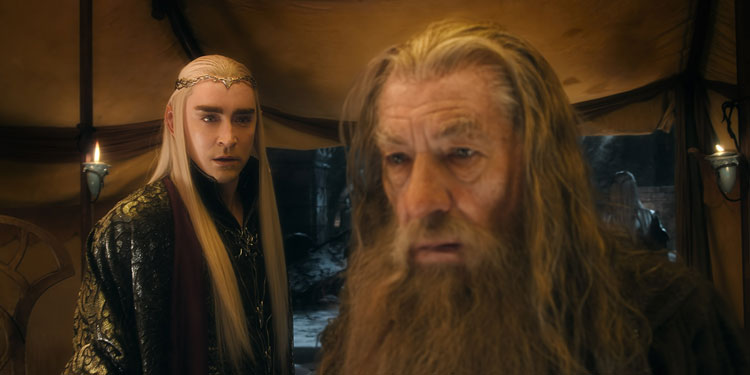 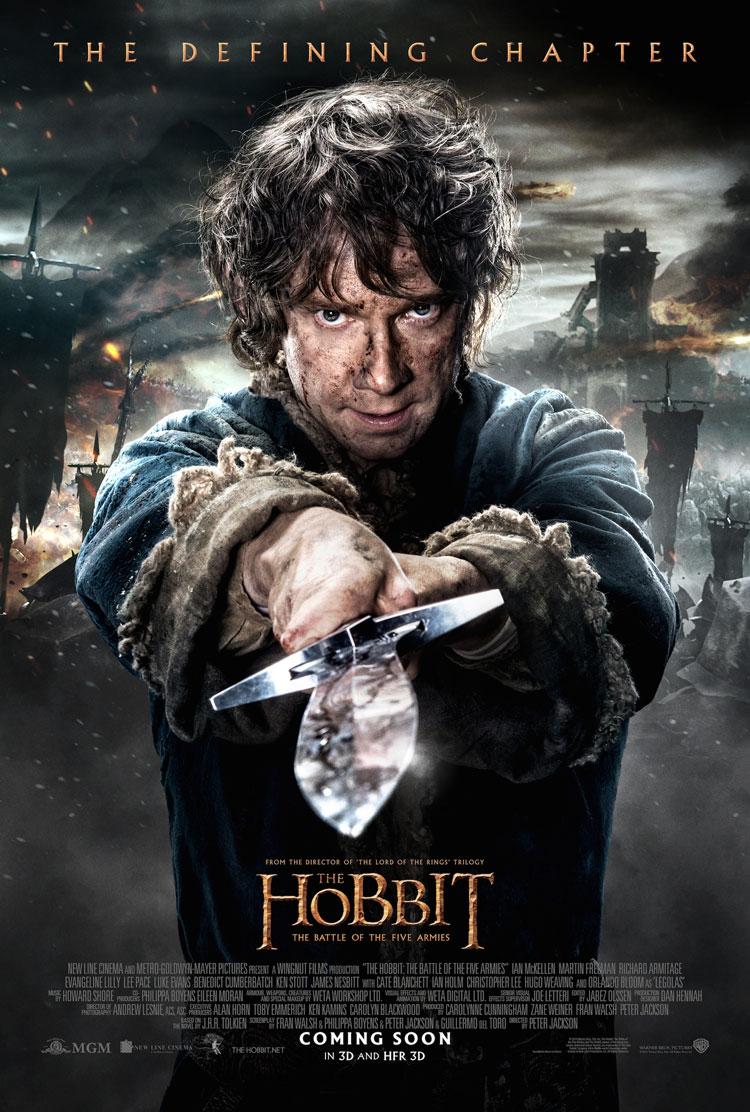 It’s been more than a decade since I went to the cinema to see The Fellowship of the Ring (2001), and at the time I went in with little expectation, just knowing that it was a fantasy film based on a beloved book that had gained legions of fans worldwide. I was captivated by a fully realised world and became attached to the characters and their quest. And then suddenly it ended and I couldn’t believe I had to wait a year for more!

That trilogy had a near perfect balance of great acting, amazing costumes and sets, some purely jaw dropping set pieces, humour and heart. You could tell that this was a labour of love for all involved and it really showed. It is sad to say that I didn’t get the same feeling from watching the Hobbit trilogy.

When it was announced that The Hobbit would make the transition onto the big screen I was excited, having read the book on the back of the Lord of the Rings films. What followed was a fascinating and public tale of studio politics over rights which unfortunately had original director Guillermo del Toro walk. This was a damn shame as I would have loved to see his vision. There was also the decision to stretch a small book into two films with extras taken from J.R.R. Tolkien’s books, which I was fine with, and then the decision to stretch it out into three movies.

They have done it with Harry Potter, Twilight and The Hunger Games, and in my mind it’s purely for financial gain. It’s called the movie ‘business’ for a reason, but this decision is the main issue I have with the Hobbit films. The first two are stretched and overly long and I almost fell asleep watching The Desolation of Smaug (2013). The middle should have been the end of film one: the fantastic barrel escape sequence. Then we got to Lake Town and it just dragged out. Finally we saw Smaug, who came off less fierce and more naive and stupid, with the dwarfs doing their best to piss him off. And then he flew away and it ended on an anti-climax.

However the beginning of The Battle of the Five Armies (2014) thankfully hits the ground running with a brutal (yet brief) attack on Lake Town.  It sets the pace for the final film, which I’m pleased to say is much better that the last.

The plot sees the Dwarfs defending the now vacant Lonely Mountain from the survivors of Lake Town and Elves. Bilbo is trying to keep the peace when more dwarfs and goblins show up and as you have probably guessed it, it all kicks off.

I admit that I went into this film with little expectation. Part one was a welcome return to Middle Earth but was lacking character depth and a show stopping ending to keep me going for a year.  I was caught up by the hype of part two and was disappointed. I also thought that as Legolas has been introduced into these films, then surely he would be best to take down the dragon with the black arrow, and as predicted he is nowhere to been seen in the opening attack in this film.

What I was expecting from this one was a dragon attack, Bilbo pretending to be in life threatening danger (but we all know he will survive), a drawn out ending where everyone says goodbye, at least 75% of it to be a massive fight sequence and some more stunning shots of New Zealand.

As such I found this the most enjoyable of the three. Straight off the bat we have action, a pause in the Lonely Mountain, and then more action. Peter Jackson and Weta know how to create epic battle sequences and they don’t disappoint in pure spectacle. Without spoiling too much some stand out moments include what I will call ‘cart attack’ and ‘Tower Bridge’.

Although the vast armies lack the ‘wow’ factor of The Two Towers (2002), the CGI is better and the 3D is not as blurry as the fight seen at the beginning of part one.

The best comparison to this film is The Return of the King (2003,) as it has similar beats. What it lacks though is the well placed humour (“that still only counts as one”) and some of the characters aren’t fleshed out or are largely ignored, so as an audience we don’t resonate with them. There was virtually no exposition for one character, so when they met their end there was just no impact.

Bilbo is still very much the heart of the story and Martin Freeman excels in his performance. It’s a shame we don’t get to see much of him in this film but as a friend of mine pointed out, the advertising of these films focused on Bilbo, but the films themselves seem to focus more on the dwarfs and their quest.

Having claimed their kingdom Thorin is closed off, seemingly corrupted by greed. After all these years he has reclaimed the land of his people and his birth right but isn’t in possession of the Arkenstone. He makes the others search for it, barricades them in and forsakes his vow to share the wealth with the survivors of Lake Town. With these notions of greed and corruption he becomes the new Gollum and to be frank he comes across as a bit of a dick. But then he enters his inner cave and returns to normal and once again is one of the best characters in the film. Credit due to Richard Armitage’s performance and Thorin’s internal struggle is impressively portrayed with subtle facial expressions reminiscent of Viggo Mortensen in the Lord of the Rings trilogy.

It’s always a pleasure to see Sir Ian Mckellen as Gandalf the grey, although there were some unintentionally hilarious moments when he said the names of Bilbo and Legolas. If you haven’t seen the redub of the ending to Return of the King (2003) on YouTube, then do so before you watch this film.

Luke Evans’ Bard is given a chance to shine and does great as the reluctant leader. If only he would stop looking so moody all the time.  Alfrid (Ryan Gage) is comic relief audiences love to hate but is not as slimy as you might expect and gets some of the films few laughs.  A welcome addition is Billy Connolly’ Dain who steals every scene he’s in, despite the special effects team youth-ing him akin to Tron Legacy (2010), and unfortunately making him look like a character from The Polar Express (2004).

We also have the welcome return of Galadriel (Cate Blanchett), Elrond (Hugo Weaving), Saruman (Christopher Lee) and Radagast (Sylvester McCoy) for the fantastic rescue of Gandalf, although we don’t get to see as much of Radagast as I would have liked.

But then again this is thankfully the shortest of the trilogy and I am glad they get to the point. The pace is a lot better and it doesn’t feel like you are sitting there for 144 minutes. The direction is fantastic and we also have Jackson’s trademark twisty camera effects, but alas, I couldn’t see his cameo.

It’s a well-constructed finale without too much baggage, although an issue for me is that they still insist on setting this up as a prequel to Lord of the Rings. All this foreshadowing just seems unnecessary. It should have just been Bilbo’s adventure and held focus as we all know what happens 60 years later.

However the ending is short and sweet, possibly due to all the complaints about Return of the Kings’s (2003) drawn out conclusion. But it’s a nice bookend of Bilbo’s story which leads right into Fellowship of the Ring (2001).

And thus leading back to movie politics, as this may be the last movie we see in Middle Earth as allegedly the Tolkien estate weren’t too happy with these films and won’t be licencing the rights for any future movies. But if it is the last time we see Middle Earth on film then it went out on a high note. Well done Mr Jackson and co. Have a well-deserved rest and hurry up and make that rumoured Doctor Who two parter!

Overall Verdict:  The best of the bunch thanks to some spectacular non-stop action sequences, trimmed baggage and some great acting. It’s not as good or impactful as Return of the King (2003). I doubt this will win any Oscars, but if it’s any consolation to the filmmakers the audience applauded once it ended. And that doesn’t happen a lot these days.