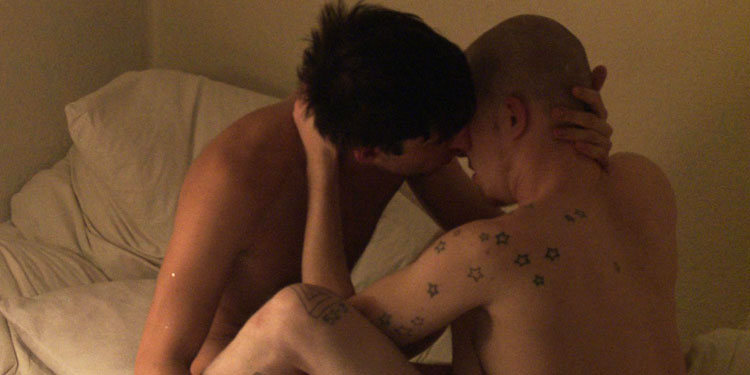 On the surface they are all quite similar, taking place largely in a series of gay men’s bedrooms, where we see what they’re doing and they talk about their lives and most particularly their relationship to their sexuality. However the more you watch them, the more you see each films’ differences.

With the first, San Francisco, there’s very much the feeling of this trying to document the variety of gay life, with the fact we’re in the guys’ bedrooms being an attempt to strip out the artifice so that we can see them without the distractions of other people and worries of how others will think of them. There are small hints that perhaps this isn’t quite as pure documentary as it might initially seem, but it’s still extremely successful and thought provoking. For example, some of the men start out naked/near naked and then you watch them get ready to go out, which doesn’t just involve putting on clothes but a whole public persona. Some use the privacy of their bedroom to contemplate their interior life, while others just live their lives. It’s a fascinating and extremely well made movie.

San Francisco is followed by Berlin, where as the title suggests the action moves to Germany. This time around there’s more of a sense of there being a plan behind what we’re seeing. There’s still a variety of men, such as a cute gay couple together on their mattress, whose sweetness and intimacy contrasts with the assumptions you might have due to their skinhead look. Again the men involved show a range of gay life and the intimacy remains. However this time running through the film is the fact that by the end two of the men will meet for a sexual rendezvous.

Click here to watch the In Their Room trailer.

Again the film as a whole is well made and interesting, but while somewhat more explicit the fact there’s a visible plan somewhat lessens the uninhibited intimacy of the first film, even if it continues the excellent way it manages to further uncover the array of gay sexuality and the humanity attached to it.

For the third film we go to London. The film is good but for the most part it doesn’t have too much more to add. There’s more a focus this time on the guys talking about meeting others for sex (or dates), what they like to do, what turns them on and what they want to get out of it. It’s certainly interesting but not quite as illuminating as the other two films – perhaps British guys just aren’t open enough for this kind of thing. Even when one of the guys masturbates it feels like he’s doing it because that’s what expected in an In Their Room film, rather than it being as natural as it seems in the other two.

It’s certainly not a complete write-off, as it’s still very watchable and some of the participants are great. That’s particularly true of an older gent who’s had a stroke but still intends to go out on the town – in full PVC drag – even though his condition means he can’t speak as well as he used to and the sexual life he once led (and which he still wishes to lead) has now had to alter – although he certainly hasn’t given up casual sex. It’s a powerful window into aging as a gay man. While many talk about gay culture shunning older people, it’s rare to see how deteriorating health and abilities change a gay man’s life, and the choices they must make because of that (and here it’s great to see him still intending to live a full gay life despite the difficulties).

But while London may not be quite as good as the other two, as a collection In Their Room is a sexy, intimate, and extremely intriguing set of films. With this project – and particularly with the San Francisco instalment – Mathews manages to look at gay sexuality in a way no filmmaker quite has before. He strips things down – both literally and figuratively – to find a way into an interior gay life that feels honest, private and somewhat profound. There are moments where it’s like seeing minute moments of your own life that you’ve never seen captured on film before.

There’s a fascinating humanity to it, allowing In Their Room to become a surprisingly rare examination of gayness as an intrinsic part of someone’s personality, leaving the viewer to ponder what is innate and what is a social construct, what is the absolute unvarnished truth and what even under Mathews’ discreet lens is obfuscation or swagger. It’s a shame more people can’t manage to capture what Travis does here. Mathews himself managed it with his I Want You Love short – which is by far the best film ever made about two men having sex – but it’s still vanishingly rare.

Overall Verdict: While not for everyone, those interested in gay sexuality stripped of societal pretence will find In Their Room has plenty to often the inquiring viewer, pulling them in with its impressive intimacy and smart but sexy use of very explicit imagery.