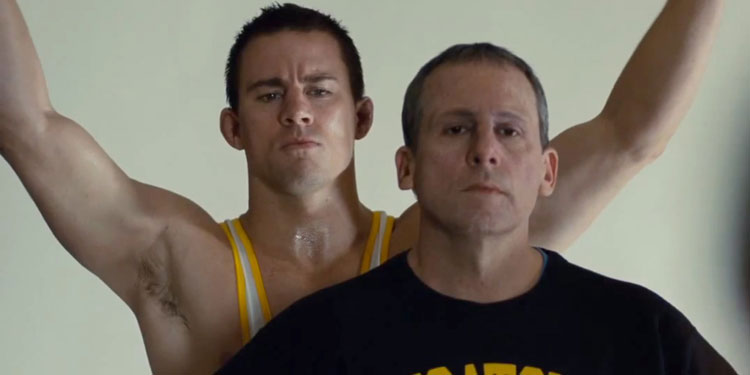 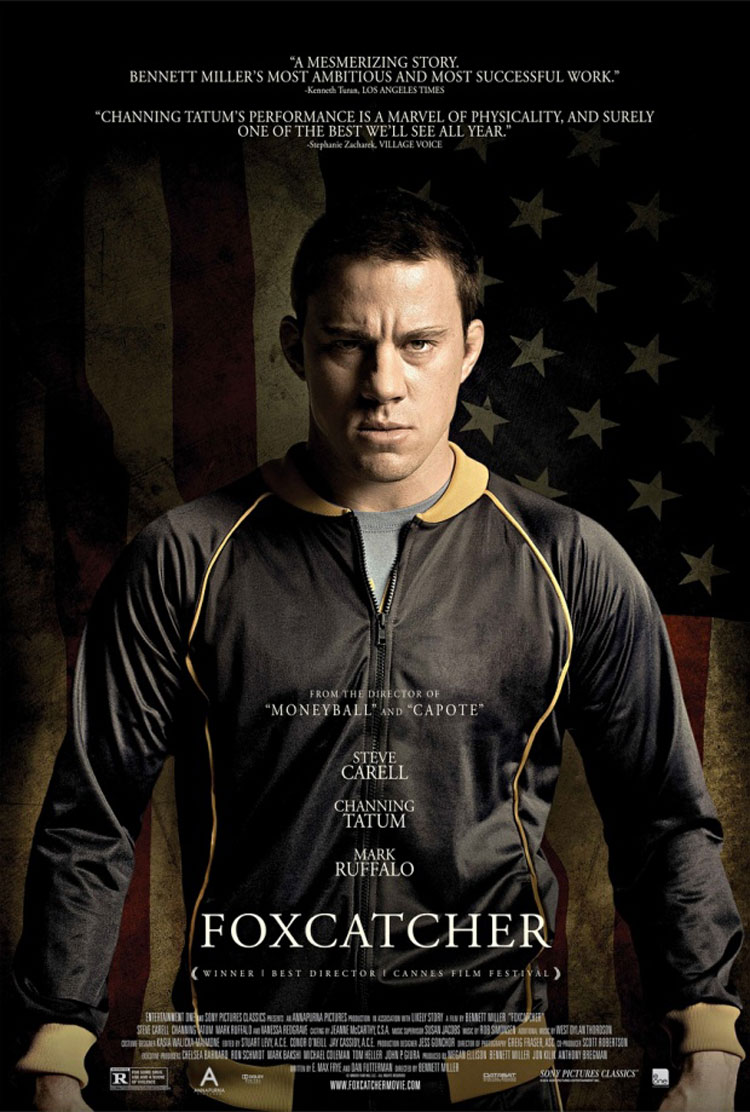 The charming, likeable, warmly funny persona is utterly gone. In its place is a portrayal of du Pont, the heir to a vast chemical fortune, enormously wealthy but painfully lonely. His mother, Jean (Vanessa Redgrave), looms like a huge dark cloud over his life, her disappointment in her geeky, fragile, unattractive son all too obvious. She pours her love into horses, he into the sport of wrestling – horses are stupid, he says, all they do is eat and shit. His love of his pastime is so great he decides to basically take over and run the US wrestling team to train them for the 1988 Olympics. Top of his shopping list is Mark and Dave Schultz (Channing Tatum and Mark Ruffalo), brothers who won Gold in Los Angeles in 1984.

Dave is a family man, happily married and devoted to his two children, and views moving onto du Pont’s vast estate to train suspiciously. Mark however, the younger brother, is more willing, lured by a brand new gym, beautiful grounds and a salary of $25,000 – ‘the highest number I could think of’ he tragically tells his unimpressed sibling. Mark, it transpires, was abandoned as a baby, and brought up by his older brother. He clearly has as many issues with loneliness as du Pont, and when he moves in the pair begin the relationship that is at the heart of the film – although never quite resolved satisfactorily.

Du Pont initially seems to view Mark as a beefcake trophy he can impress people with at posh dinners, but soon it becomes much more sinister than that. Before long they are cutting each other’s hair, sharing cocaine and perhaps even getting physical, although the film shies away from that subject as soon as it hints at it (and the real life Schultz has been very vocal that the suggestion is not true). The awkward, mumbling Mark is basically du Pont’s plaything, but when Dave turns up to coach the team it gets even darker and deeper.

The film is really a showcase for the amazing performance of Carell. He becomes a slimy, reptilian creep, with a weird nasal speech pattern, absolutely no sense of humour and a bloated sense of his own talents and achievements. Driven on by his mother’s insistence that wrestling is a ‘low sport’, du Pont, like Charles Foster Kane, seems to want to collect everything but feels let down by everyone around him – apart perhaps by the birds he studies and has stuffed around his huge mansion. He is extraordinarily vain – after his troops win Golds at the 1986 World Championships he celebrates by fighting them. They, sportingly and for obvious reasons, let him win – he clearly believes he has won fair and square. He claims Mark is his only friend in the world, but it is brother Dave who really understands the boy, which can only lead to disaster. With his pasty skin, enormous nose and inflated ego, it’s an emotional tour de force of someone who clearly was even madder in real life than portrayed here.

That leaves the film with a problem. His behaviour is erratic, yes, but never quite explains his total meltdown at the end of the film. Also why did poor Dave bear the brunt of it rather than Mark, the son who really disappointed him. Miller had a similar problem at the end of his Capote portrayal, although as he proved in Moneyball he can film sports sequences, and here the wrestling scenes are done convincingly and to the point.

Overall verdict: Fascinatingly dark tale which serves as the perfect vehicle for Carell’s tour de force as a psychotic egotist with way too much money and power, and an empty hole where his heart should be. It will win him an Oscar nod, and may well land him the gong. If it does, no complaints, it’s a marvel to behold.