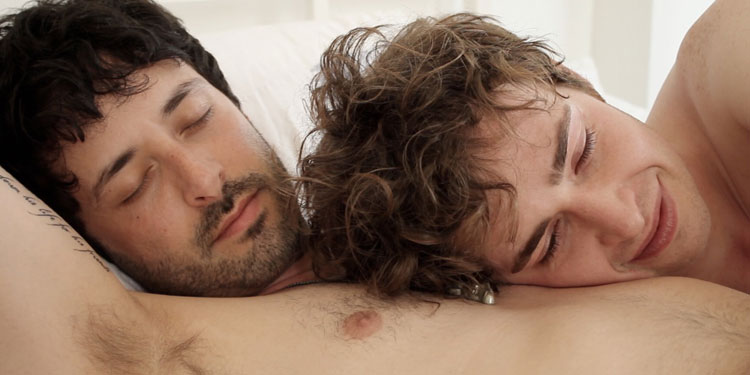 But then he meets Jonny, who lives downstairs and seems keen to make friends. They certainly share an attraction, but Nate isn’t sure what his sexuality is, and his life suddenly becomes more complicated when his sisters – who are certain he’s straight – announce that because of the various issues in their lives, they’re coming to stay with him. Nate flirts around the idea of starting something up with Jonny, although Jonny isn’t keen on the idea of having to keep the whole thing in the closet.

Lloyd Eyre-Morgan is becoming a bit of a one-man British LGBT film industry, having made Dream On and Celluloid in the past couple of years. Here he directs co-writes alongside alongside Neil Ely, for a film that has its feet in the world of the romantic comedy but also wants to explore modern sexuality a little too.

I’m not 100% sure what to say about Three In A Bed, as I liked it and yet didn’t at the same time. The problem is that it suffers from what 1,000s of other micro-budget movies do, such as acting that ranges from good to abysmal, a script that is sometimes a little too on-the-nose (and includes a couple of balefully clichéd moments) and a sense of things being slightly rushed.

I decided in the end it’s like a nice shirt you’ve just washed and taken out the tumble dryer (stick with me here). It may be a little crumpled up, creased and not exactly look perfect, but you know that underneath that there’s still a nice shirt, and if it had been possible to do some ironing it would have been fine. I’ll end the metaphor there, as it’s already getting a little convoluted.

Click here to watch the Three In A Bed trailer.

Three In A Bed has its heart in the right place 100%, and Brennan Reece and Darren Bransford put their all into bringing Nate and Johnny to life. Indeed the film is at its best when it’s talking about them and their relationship. That whole part of the plot is rather sweet and largely successful.

Nate and his sisters are more problematic, partly because nearly all the female characters in the movie are either written or played in a slightly caricatured style where they don’t seem quite real. We’re presumably meant to feel the sisters are a handful but have hearts of gold underneath, but I can imagine many viewers feeling that for much of the movie they’re annoying and rude, and that Nate isn’t looking out for them as he promised his mum, he’s enabling them. The hearts of gold do properly start to emerge as the movie goes on, but I can imagine that for some people it will be a case of too little, too late. Ultimately the idea of what the movie is trying to do here is more successful than the execution.

I wish I could be more positive, as there are very few good British, gay-themed rom-coms and it’s clear that Three In A Bed knows what it wants to do and puts in a large amount of effort to do it. Unfortunately it falls slightly short. To go back to the metaphor, how much you enjoy it will largely depend on whether you need your shirts ironed before you put them on or not.

Overall Verdict: There’s some charm and some laughs, but Three In A Bed is a somewhat uneven movie which never quite overcomes the problems that many genuinely micro-budget productions face.