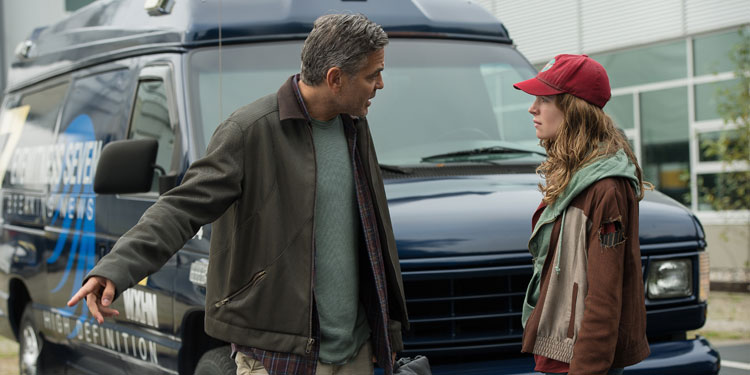 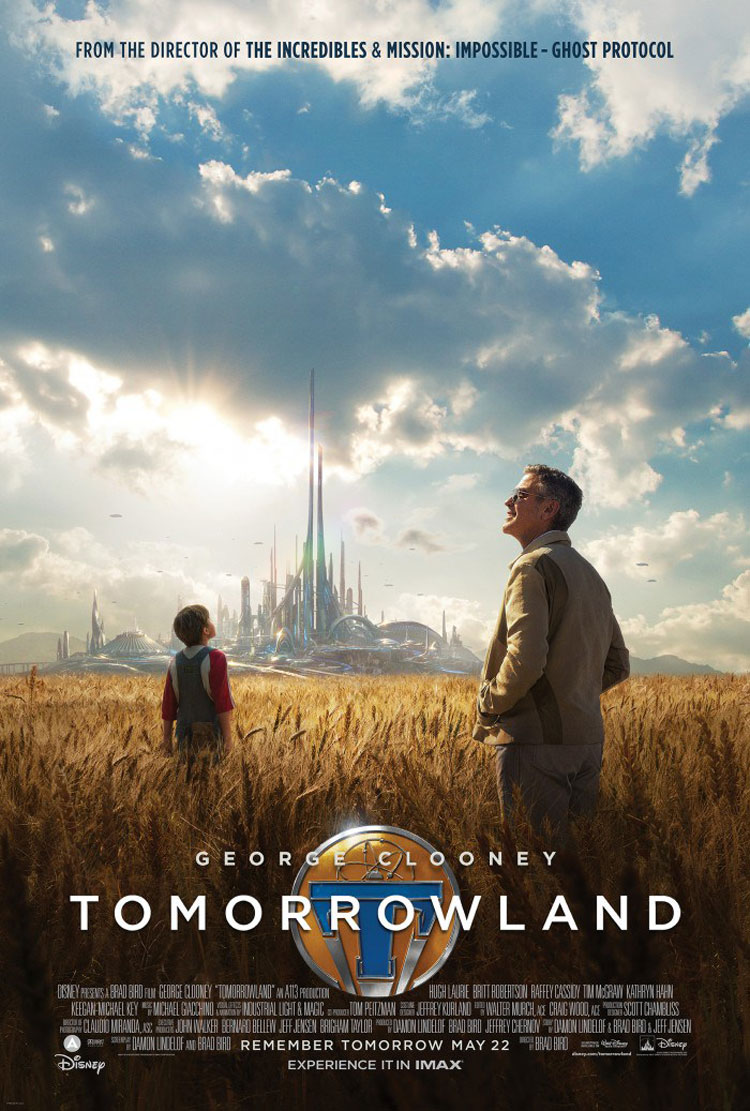 Tomorrowland tells the story of Casey Newton (Britt Robertson) a highly optimistic girl with smarts who has dreamt of travelling to the stars. She is arrested whilst trying to sabotage the dismantling of Cape Canaveral’s Launchpad, and upon release she discovers a mysterious pin which by touch transports her to the scientific and artistic wonder that is Tomorrowland (think Epcot designed by Apple and Syd Mead, complete with a hoverrail (hover meaning hover, rail meaning rail)).

After a brief spell there she tracks down former boy genius Frank Walker (George Clooney) in order to travel back and they eventually embark on a mission to save our world.

There is an air of mystery surrounding this film which thankfully the marketing department are unwilling to disclose and it may be best to keep it this way if you wish to see this film.

There’s little surprise that there’s air of mystery as it is co-written by Damon Lindoff, who is famous for writing Lost (2004-2010) and butchering the screenplay to Prometheus (2012). He has a habit of building things up to being vital and then discarding things needlessly without conclusion, never really explaining anything and just leaving you with more questions than answers.

I should let this pettiness go but in a film like this a little more explanation would have gone a long way.

On a positive note the first 90 or so minutes are absolutely superb! From the custom Disney logo (see also Tron Legacy (2010)) we have a fun and ballistic thrill ride which is visually cool, has fun with editing and non-linear narrative, and is the type of magical and adventurous cinematic fun reminiscent of early Spielberg films.

We are introduced to the back stories of Frank, who is invited to Tomorrowland by the mysterious Athena (Raffey Cassidy) at the 1964 New York World’s Fair. We get a glimpse of a world that’s straight out of a computer game, where Earth’s best artistic and scientific minds have come together to create a utopia of discovery and progression.

Fast forward a few years later and we get Casey’s backstory of how she is unwillingly drawn into the mystery and adventure. Her main introduction to Tomorrowland is a great single shot reminiscent of many a ride at Disneyland.

Reluctant at first, they make a great team and together they even battle robots and travel to Paris in order to reach their goal.

It’s just a shame that for me the last act of the film couldn’t keep up with the pace and fun of what preceded it, and as such seemed a bit dull and anti-climactic.

There are many things that I loved in this film, such as the overall ecological message brilliantly conveyed in a speech made by Tomorrowland’s ruler Nix (Hugh Laurie). The best sci-fi for me has contemporary themes and deals with real world issues in a fantasy setting.

And this is a geeky film for all the right reasons. The trip to a comic book store is a visual treat as we see references to Brad Bird’s previous films The Incredibles (2004) and The Iron Giant (1999), not to mention a lot of Star Wars merchandise. No surprise as Disney paid a lot of money acquiring Lucasfilm and product placement will do anything but harm the box office for The Force Awakens (2015).

The cast suit this film perfectly. George Clooney once again plays George Clooney, yet a bit more pessimistic and sour, due to the fact he was exiled from Tomorrowland as a young man, and can see our world destroying itself through global warming, famine and war. However as George Clooney he brings his trademark charm and perfectly timed humour.

Britt Robertson is excellent as Casey; a young, optimistic, charismatic and strong female lead. She isn’t the damsel and it’s good to see more films where there is a balance between male and female central characters, although I did get a Jennifer Lawrence vibe from this rising star.

They are each other’s yin and yang with a common goal and lots of playful bickering between them.

The cinematography and design of the titular city are great and the bigger the screen you see this film on the better. Michael Giacchino’s score is reminiscent of the Disney sci-fi films of yesteryear and adds to the fun. All in all these elements help create a sense of adventure, wonder and magic in this film which personally we need in order to renew our interest in space travel. Combine this film with Interstellar (2014) and audiences should understand that we are not helping this planet as a species, a point this film literally screams in our faces.

But despite the negative environmental message there is an overall optimism conveyed through this film – “Can’t inventions just be fun?” Things can change and it’s not too late as long as we realise what’s wrong and make a difference.

This movie is hard to score as at some points this is a 5 star film, and the escape from Frank’s house is pure joy, danger and excitement. But it descends and changes pace, becoming a bit far-fetched, even for a sci-fi film. The ending didn’t live up to its potential and in true Lindeloff fashion, just raises endless questions and possible plot holes.

This is a film that ticks a lot off what you want in a film. It’s entertaining, great acting and characters, great special effects and exciting scenes, great humour, a good moral message and overall a huge sense of optimism. Kids will love it but it just lacks a fitting conclusion and doesn’t live up to its potential.

Overall Verdict: A mostly fun and exciting thrill ride let down by its third act. Great performances and it has the same magic and excitement of the Spielberg and Disney films of yesteryear. Not a bad film by far and a great summer popcorn flick.